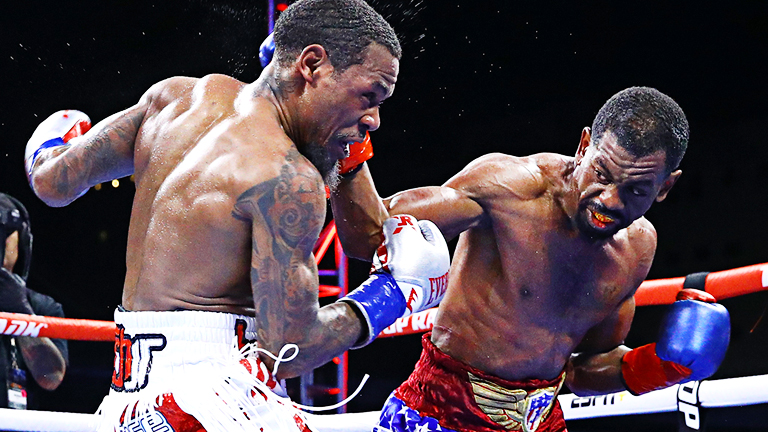 IT would have been a bad look if Jamel Herring, a marine who served two tours of duty in Iraq, wound up losing on Veterans Day weekend, the hallowed American holiday honouring its retired military personnel. The WBO super-featherweight title-holder briefly flirted with that possibility in the 11th round of his first title defence against Lamont Roach Jnr at Chukchansi Park.

With several seconds left in the round, Roach uncorked an overhand right that sent Herring into a spasm and crashing into the ropes as Roach whaled away with power punches. It was the best shot of the night in what was otherwise a tactical fight that Herring had hitherto largely controlled. Herring, however, would quickly recover, and safely box his way through the 12th en route to notching a unanimous decision win. Crisis averted.

Scores were 115-113 (Max DeLuca) and 117-111 twice (Rey Danseco, Gary Ritter), all for the 34-year-old native of Coram, New York. This was Herring’s first defence of the belt since wresting it from Japan’s Masayuki Ito in May.

“It was a good shot,” southpaw Herring admitted in the post-fight interview. “I thought I had my hand up, but Lamont came from behind it. It was a clean shot. I had to toughen it up and fight it out. I couldn’t go down in front of my marines.”

It was all Herring in the early going. Bigger and longer, Herring worked behind his jab and repeatedly struck Roach to the body with the straight left. The Washington, D.C-born Roach, 24, was looking to counter and spent nearly the first five rounds trying to calibrate his timing. It was a foolhardy decision, as it allowed Herring to score points simply be being active. By the time Roach was able to get the timing down on his left hook, he had already dug himself into a hole, as two of the judges’ scorecards can attest. In round nine, Herring landed a partial right hook as Roach lunged forward, knocking him down to the canvas. Referee Marcos Rosales ruled it a slip, but replays suggested the contrary.

Bulgarian heavyweight contender Kubrat Pulev has his eyes set on the winner of the Andy Ruiz Jnr-Anthony Joshua rematch, so much so it appears that he is prepared to sleepwalk his way there. Pulev outpointed heavyweight has-been Rydell Booker, two years removed from a 12-year prison sentence, over 10 rounds, but looked monotonous and uninterested most of the time.

Judges Fernando Villarreal and Carla Caiz had it 98-92, and Steve Morrow had it 99-91, all for Pulev. Edward Collantes officiated.

Booker, blubbery as a seal, was merely looking to survive. By the middle rounds, the Detroit man was gasping for air and spending a lot of time on the ropes. His right eye was noticeably puffy, perhaps from being thumbed earlier in the third round. Pulev repeated the same jab-jab-straight right combination over and over again, as if going to the body constituted an illegal move. In the late rounds, as Booker began to wither away, Pulev began connecting on several unanswered right hands.

Albany welterweight Amir Imam was absent from the ring for over a year-and-a-half due to promotional issues with Don King, but he made his return a successful one, scoring a fourth-round stoppage (set for eight) over Nicaraguan Marcos Mojica. Imam dropped Mojica twice in the fourth, the first courtesy of a body shot. He went down again moments later from a straight right. Referee Gerard White promptly waved off the fight at the 0-56 mark. Imam is looking to restart his career under the Top Rank banner.

Cuban southpaw Robeisy Ramirez, the ballyhooed two-time Olympian, had a disastrous professional debut three months ago, losing by split decision. He fared better this time around, notching his first win in the big leagues by stopping Mexican-American Fernando Ibarra de Anda in the final round of a featherweight six. It was a body shot that did it at 1-37. Mr White officiated.

THE VERDICT: Herring looks to unify after a successful first defence.