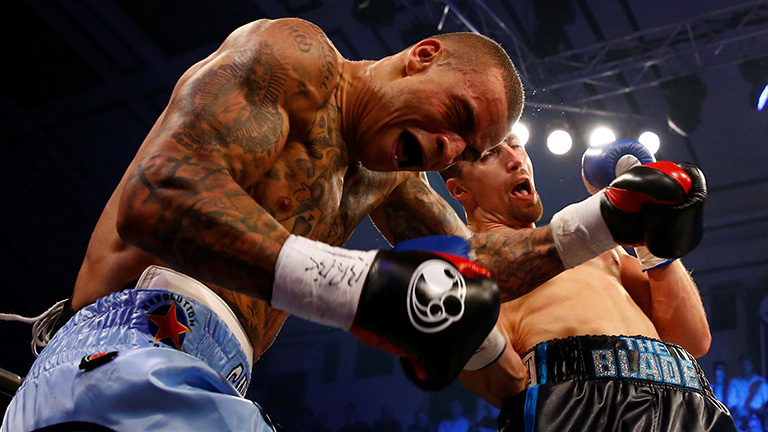 2017 so far has been illuminated by shows at big arenas and bigger stadiums. But there is something special about headlining in the raucous atmosphere of a rammed York Hall in Bethnal Green.

It was an experience for Jake Ball in his last fight in September. “I was aware of it as I walked out. Once I was in the fight I was zoned in. It was great. To box in front of a packed out York Hall, it was unreal,” Jake told Boxing News. “It’s different to boxing in these big arenas. The spectators are so close to you, you feel the energy coming off you as you walk to the ring. It was amazing.”

Ball beat Joe Sherriff over 10 rounds in what turned out to be a bruising encounter. “It started off really well. I’ve been working on a lot of things, him being a southpaw. I started the first round wanted to feel him out, see where he was at. The second round I upped the pace a little bit, caught him with a good back hand to the body, then I applied the pressure a bit more,” Ball said.

“I went a bit wild after the second knockdown. I was hunting bad for the finish and I think right at the end of the round I think I caught him with a good right hand lead hook to the body. Then the bell rung.”

“The corner was having fits with me saying take your time, take your time,” he continued. “One of the shots I caught him on the back of the head or the elbow or somewhere, somewhere hard and I hurt my hand. The rest of the fight I was pawing out with my jab just trying to find a back hand. That’s really all I could do.

“I had to adjust. I couldn’t let two or three rounds pass by, I had to change it immediately. The 10 rounds is all new experience for me. Overall it was a great fight, a great learning fight, great experience and on to the next one.”

Ball is rebuilding from a disastrous first round knockout defeat to JJ McDonagh last year. “Too eager, rushing in. Not enough experience. Every opponent before that I was hitting was going down,” he said. “Where I was used to that sort of opponent – although I was aware he was a step up – I thought I was going to do the same thing. It didn’t pan out.

“I’d rather than happen that early in my career, rather than obviously fighting for a world title or something like that and something happen there. We’ve looked at it and we’ve learned a lot from it.”