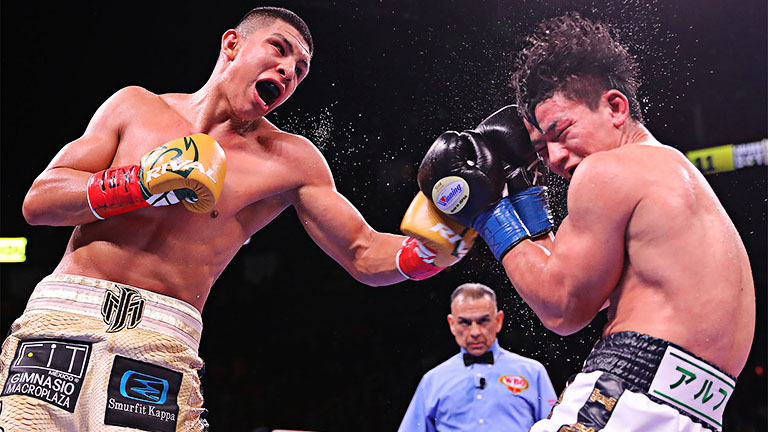 WBO super-welterweight world champion Jaime Munguia is an active fighter. He’s defended his belt already this year, beating Takeshi Inoue in January. On April 13 he will return to Mexico, his homeland, to fight Dennis Hogan in Monterrey.

He is proud to box so regularly. “It is very important,” Munguia said. “We are in the big leagues now, to stay busy, to be concentrated. When you’re the world champion you have to think more. You have to do things that you didn’t do before, be more intelligent. So it’s important to stay calm and be training, so it’s very important to do that now at this level of fighting.”

Before he won his world title, he almost stepped in at short notice to fight Gennady Golovkin last year. He is open still to boxing Golovkin. “We would be interested in that fight with ‘GGG’ now that he is on DAZN. The truth is it would be a good fight for us and for the people. One year ago it couldn’t happen, but now obviously it’s a possibility, and if a year ago I felt ready, now I feel even more ready. So with pleasure we would accept the fight, but right now I’m focused on the fight that I have on April 13, but after that with pleasure we would take this fight,” he said.

“I do have plans to move up to 160 pounds, maybe next year or for the next fight or maybe by the end of the year. The truth is we are still saying that, but I feel good, and I feel good making 154lbs for this fight that I have on April 13. But we are considering a move up to 160lbs.”

At present Munguia maintains that he is the leading super-welterweight in the world. “The truth is, and with all due respect, and I’m saying it with as much humility as possible, that I feel like I consider myself number one,” he said.