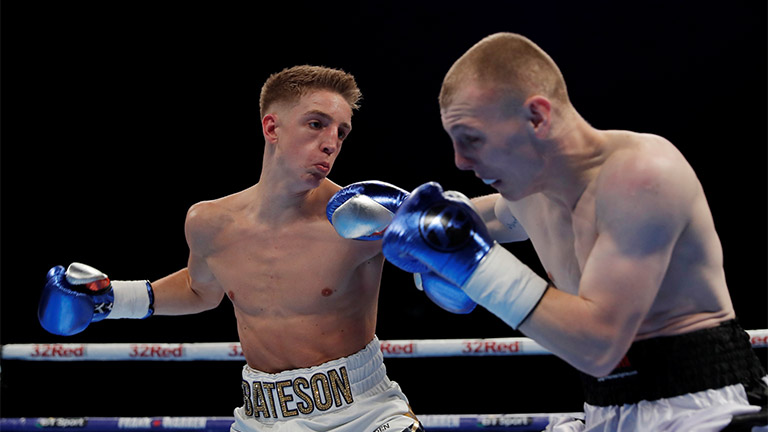 JUST for a few moments, early in the fourth of a scheduled six in the Banqueting Suite at Elland Road, it looked as if Jack Bateson’s impending English title clash against Michael Ramabeletsa might be in danger of being scuppered. A clash of heads with bearded Georgian Khvicha Gigolashvili saw Bateson retreat with blood above the left eye and briefly it appeared a minor crisis was about to unfold.

Fortunately, though, things weren’t as bad as they first appeared and, in the end, with the emergency averted, the unbeaten home boxer, switching stance with regularity, secured his 11th paid victory with a 60-54 result handed down by Howard Foster.

The Georgian had his moments, notably in the opening exchanges of the third when he landed two lefts upstairs either side of a right to the body. However, even with Jack more cautious than usual, it was only ever going one way.

Two further six-rounders were overseen by Doncaster referee Mr Foster and in neither of these did an opponent manage to score a single round against popular home boxers.

Justin Newell of Leeds, back on track and going by the nickname ‘The Grey Bomber’, proved on song against Derbyshire’s experienced Lee Connelly who, already trailing, was allowed a little time to recover after taking a low blow late in the second.

Upping the pace from the halfway stage, and with uppercuts increasingly finding the target, Newell finished strongly, whereas Connelly, who had replied intermittently, had picked up a little reddening and swelling below the left eye by the end.

That other six-round winner was Bradford’s Hamed Ghaz, who, in his 16th pro bout, prevailed over Blackburn’s Naheem Chaudhry to keep his unbeaten record intact.

Not for the first time I was impressed by the classy Ghaz, but found myself wondering – again, not for the first time – when he was going to step it up a few notches. He ought to, for instance, be looking at challenging for a Central Area title in the very near future.

Referee Andy Brook of Leeds was scoring his own bouts for the first time following the culmination of a successful trial period but didn’t need his scorecard for the show’s opener, a heavyweight bout set for four between Birmingham’s taller and heavier Shaun Duffy and Dewsbury first-timer Aidan Anderson.

Anderson, having been rocked onto his heels by a stiff jab in the opening moments, was duly despatched with 15 seconds of the first round remaining. Mr Brook reached a count of 10 over the new start who, after a spell of pressure, had been sent to the canvas where he remained on all fours.

Also punching for pay for the first time was Leeds super-fly and former World Youth champion Oliver Simpson, but he encountered no such problems in a four-rounder against one-fight Batley novice Nabil Ahmed.

Ahmed, though bested throughout, landed a few decent replies and contributed well to a closer last round. Mr Foster scored it 40-36 for Simpson.

He offered the same score for Heckmondwike super-lightweight Cory O’Regan at the conclusion of his four-rounder against Plymouth’s game Chris Adaway.

At one point, Adaway, in a more defensive mode than is sometimes the case, almost exited the ring between the top two ropes.

Three more four-round shutouts had Mr Brook as the arbiter and saw Sheffield’s Keanan Wainwright return to winning ways by outworking Worcester’s Michael Mooney, Leeds’ Zahid Hussain warm up for a clash next month against Jason Cunningham with a victory over Bradford’s Jake Pollard, and popular local Ismail Khan take all four rounds against Bognor’s reluctant Liam Griffiths, who was an 11th hour sub.

Hard-hitting Michael Fafera of Leeds was a 40-37 winner for the same official but failed to put a dent in Middleton’s tough Darryl Sharp. Meanwhile, Howard Foster saw Ismail Khan, another Leeds man, prove too much for Mottram’s Michael Horabin, stopping him 83 seconds into the third of a feisty four-rounder having floored him late in the previous session.

The Verdict Barring one debut reverse plenty for the locals to cheer.