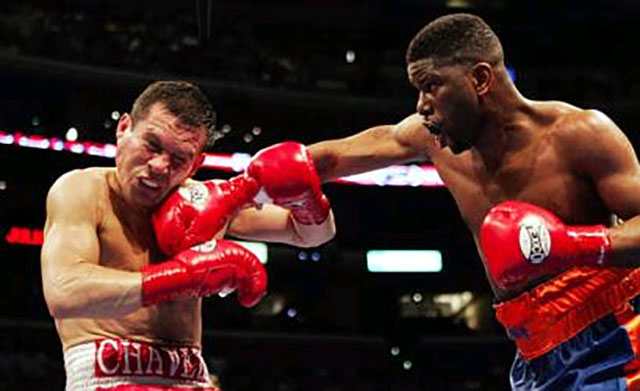 James Slater catches up with an enlightening and modest Ivan Robinson

PHILADELPHIA warrior Ivan Robinson is best known amongst fight fans for his two incredible wars with the one and only Arturo Gatti.

Yet Robinson,the only man to twice defeat Gatti – with both victories coming in Gatti’s adopted home town of Atlantic City – engaged in a number of other exciting battles.

Despite only being afforded one crack at a world title – a points loss to Philip Holiday at lightweight – “Mighty” Ivan Robinson endeared himself into the heart of Philly fight fans.

Here, the boxer-puncher who retired with a 32-12-2(12) record in 2008 speaks (in a perfectly clear voice not at all indicative of the tough fights Robinson engaged in throughout his 16-year pro career) about his time in the ring:

Q: You had your pro debut back in October of 1992. Do you remember that fight well?

Ivan Robinson: “Yeah, a long time ago now. I remember it well, I fought a kid called Pedro Cotto, who was 0-1 or 0-2 at the time. He tried to come out strong but as soon as I landed my combinations it was all over.”

Q: You were an accomplished amateur, is it one of your regrets all these years later not to have made the Olympics, as you tried to do (Robinson, boxing as a featherweight, lost to Julian Wheeler in the 1992 Olympic trials in Worcester)?

I.R: “It was hurtful not to make it into the Olympics. But it’s a funny thing – at age 16, you normally know what you want to do with your life, or you have a pretty good idea. But I wasn’t sure at that stage if I wanted to turn pro or not. It was Meldrick Taylor – who lived just up the street from me, four or five blocks away – and watching what he accomplished, that’s when I knew.

Q: And you certainly went on to have a great, all-action pro career. I’m skipping a lot of your early fights here, but what are your memories of your IBF lightweight title challenge of the accomplished Philip Holiday in December of 1996?

I.R: “At that time, I was with Main Events, although I hadn’t signed with them. Carl Moretti, he discovered me, he and Bobby Goodman, and he told me I’d be the next world champ. It was crazy, but I never signed with Main Events. Anyway, we didn’t see much in Holiday to worry about. He was a marathon runner in South Africa, and it turned out, his endurance was crazy! I was in shape for the fight; I’d just been in camp with Pernell [Whitaker] and I’d been in camp with Junior Jones, who’d just beaten Marco Antonio Barrera, I’d been in camp with David Tua – everybody. But the big mistake I made was, I fired my dad. We’d had our problems and firing him was the worst thing in the world for me. I threw a lot of punches in that fight and it was my first fight on HBO and they treated me well and I enjoyed it. My only regret is that I never got another world title shot.”

Q: But you went on to have the two fights you are probably best known for: the two classics with Arturo Gatti, with you winning both wars.

I.R: “The one thing I wanted was to be able to say that that was the pivotal time of my career, and the Gatti fights were that. They were the highlight of my career. That was me at my peak. I never knew it at the time, but the Gatti fights were me at my absolute best. I love Gatti, may he rest in peace. I’d been in camp with Gatti, around three or four times before we fought, and he gave me the opportunity to make the money I deserved. Fighters today, they don’t do that; they duck and dive too much.

“Look at Mayweather and Pacquiao. I love Floyd but he seems scared to fight Pacquiao; God knows why. I think the fourth [Juan Manuel] Marquez fight Pacquiao had, where he got knocked out, I think that rejuvenated Pacquiao’s career; where he had a look at himself and got himself reconstructed back to his best. I think Pacquiao beats Floyd. Styles make fights and I think Floyd’s defence has gotten a little soft, and Pacquiao always could punch. I think his stance and his combinations and his will to win will upset Floyd. But I’m not talking by a knockout!

“I look at boxing as gambling: you either roll the dice right and win, or you roll it wrong and lose! I wanted to show how I belonged in the mix with anybody; that the name Ivan Robinson should be mentioned against any fighter. The Gatti fight put me there. I was a boxer but I did what I had to do to win. The first Gatti fight was a see-saw fight. He looked at it as a way to win and rejuvenate his career and get a title fight. But I said there was no way he was going to just come in and beat me up. I fought that fight to get the respect I needed from the fans. That was definitely my hardest fight at the time, the first Gatti fight. I didn’t want to fight him again, but I had to, to make a statement.”

Q: That was you at your absolute peak, at age 27 in the Gatti epics?

Q: After two straight wins over Gatti, you must have expected a world title shot?

I.R: “Yeah, I know that should’ve happened. But the fight game, it can be tricky, it can be brutal at times. We tried to make the best decisions at the time. I had just beaten the hottest fighter around in Gatti and I should have had a world title shot. But I was supposed to fight Shane Mosley before I fought Gatti. I went into training and that fight was in line, but I got cut and the cut reopened and that stopped the fight with Mosley. But God moves is mysterious ways, and I got the Gatti fights and I must have made twice as much as I would have against Mosley.”

Q: And you had that legendary “Farewell” fight with the great Julio Cesar Chavez in 2005; two legends fighting one another.

I.R: “Well, I never look at myself that way, but thank you. Yeah, my career had some ups and downs but it was great. I made a lot of money, I just wish I’d been smarter with that. The Chavez fight, that was a helluva fight for me. I was fighting a legend, even if he was an old man. I never disrespected him. And he’d fought my friend, who I spoke about before, Meldrick Taylor. A lot of people from the neighbourhood were telling me to get revenge for what Chavez had done to Meldrick when they fought. I wasn’t even thinking about that. But Chavez could still punch, he hit me with some great body shots; harder than I took in the Gatti fights. That was my last great fight.”

Q: You are a great addition to the long list of teak-tough Philadelphia fighters – such as Joe Frazier, Meldrick Taylor, Charles Brewer, Bobby Watts, Tim Witherspoon etc, etc. Why is it, do you think , that Philly fighters are so tough and so brave?

I.R: “That’s a great question, nobody has asked me that. I don’t think anyone can answer that. Could you dissect the attributes of all the great names you mentioned, and explain why they had what they had? They all had their own speciality, be it Tim Witherspoon’s overhand right or Joe Frazier’s left hook – and I guess “Smoke” is the best of all Philly fighters, and don’t forget “Joltin'” Jeff Chandler. Who knows why we’re so tough! We just do our thing.”