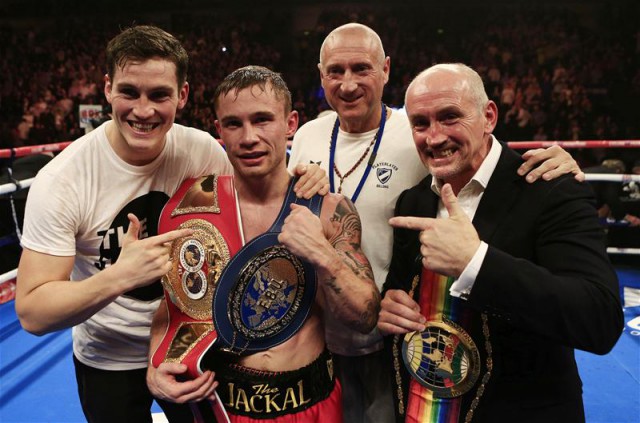 BOXING has received a massive boost going into 2015 with the news that Carl Frampton’s February 28 IBF super-bantamweight defence against Chris Avalos will be broadcast live on ITV1. The contest is the first UK-staged world title scrap to be shown live on terrestrial television since Carl Froch beat Jean Pascal in 2008, and will be hosted at the Odyssey Arena in Belfast.

Barry McGuigan, Frampton’s promoter and manager, seduced a nation when he was at his fighting peak in the 1980s. The Irishman’s WBA featherweight title fights were broadcast by the BBC – his 1985 championship-winning effort over Eusebio Pedroza secured a record 19.2 million viewers – before concluding his Hall of Fame career on ITV.

“It’s a huge day for us,” said McGuigan on the 21st floor of London’s plush Heron Tower where the announcement was made. “This is a real fight. Chris Avalos is coming to win. Frampton’s fights are not just boxing matches, they’re events in Belfast. With this platform on ITV, this could make him a superstar.”

McGuigan masterminded Frampton’s rise through the ranks and was rightfully buzzing to bring world championship boxing back to such a huge platform. Four other parties were interested in broadcasting Frampton’s first fight since beating Kiko Martinez for the belt in September, but Barry – who heads CWM Cyclone Promotions – wanted it on ITV.

“I really believe that if terrestrial broadcasters are patient, and we deliver the right fights, the figures will be huge,” he said. “Boxing can be a regular sport on terrestrial television, as well as on satellite stations. We have to prove that it will work, and we will.”

Niall Sloane, Head of Sport at ITV, admitted that McGuigan was the driving force in this exciting development.

“We’re delighted to come back into boxing for this fight,” said Sloane. “I’m sure a lot of you know that Barry is a very, very persuasive man. Carl is a very exciting boxer and this is an opportunity that excites us a lot.”

Sloane – who only began negotiations with McGuigan at the start of the month – went on to explain that should the night be a success, further boxing will be broadcast on ITV.

The charismatic Frampton added: “I’m very, very honoured that this has happened,” he said. To be on live terrestrial television is unbelievable. I’m well known back home [in Northern Ireland] but this gives me the chance to show the mainland what I can do. We’re talking millions and millions of viewers. I can’t wait to get going and put on a good show.”

The undercard – featuring Jamie Conlan – will be shown live on ITV4, before the broadcast switches to ITV1 at 10.45pm, and the show will come just seven days after Channel 5 show Martin Murray’s shot at WBA middleweight boss, Gennady Golovkin.