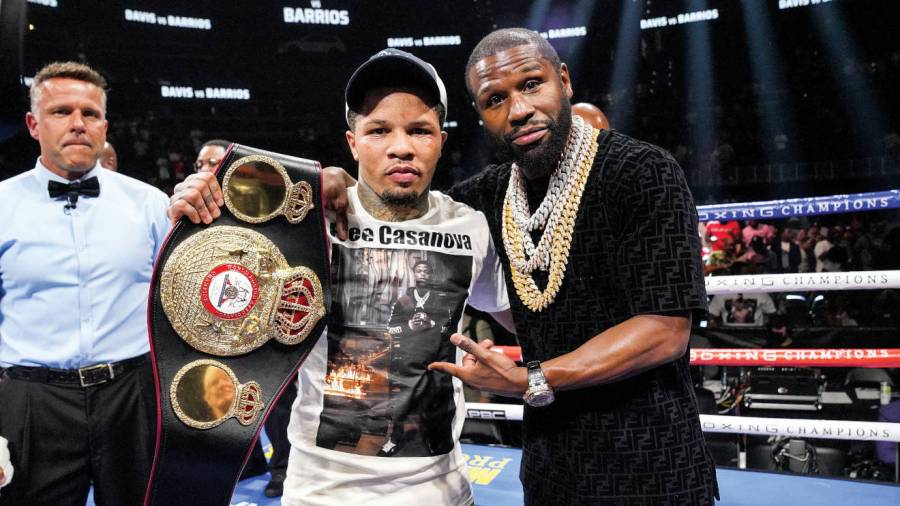 'Tank' Davis’ talents deserve to be tested against the best opponents. But that isn't happening, writes George Gigney as he examines a busy week in the boxing media world

GERVONTA DAVIS looked excellent during his foray into the 140lb division, dropping and stopping previously unbeaten Mario Barrios. It was a fun fight and Davis showed he’s carried his power up with him; it had all the ingredients for fans to get excited about his prospects at this new weight. Until Floyd Mayweather opened his mouth.

“We keep everything in-house. Mayweather Promotions and PBC [Premier Boxing Champions],” he said at the post-fight press conference. “We’re not gonna go away and make another company great. We’ve got plenty at 140 and 130lbs. We’re gonna continue to fight the fighters that we’ve got to fight.”

What he means is that Davis will only face other fighters who are also aligned to Showtime, who aired his fight with Barrios and with whom both he and Floyd have a lengthy relationship.

If that’s the case, here are some of the names Davis will not fight: Josh Taylor, Jose Ramirez, Ryan Garcia, Devin Haney, Vasiliy Lomachenko, Teofimo Lopez and Oscar Valdez. By keeping things in-house, Mayweather and the team around Davis are only stifling his career.

Gervonta already has to field criticism about not fighting the best – he faced none of the top fighters at lightweight, for example – and with comments like Floyd’s, fans will have more ammunition to aim at him.

The real shame is that Davis looks to be an exceptional fighter. When he destroyed Leo Santa Cruz, a legitimately great fighter, last year it seemed like the sky was the limit for him. Now, the limit appears to be wherever Mayweather and Showtime say it is.

Prior to the Barrios fight, Leonard Ellerbe of Mayweather Promotions was asked why Davis was not challenging Taylor, the undisputed champion at 140lbs. His response was that Taylor is not enough of a draw, as if Barrios was the second coming of Canelo Alvarez.

No one was expecting Davis to launch himself at the division’s king in his first fight at the weight, but with his team coming out with nonsense like that, it won’t be long before they’re seen as the villains in any future negotiations that may or may not happen.

It seems Lomachenko is willing to do whatever it takes to get a rematch with Lopez, who outpointed him last year. Over the weekend, Lomachenko impressively stopped Masayoshi Nakatani and attention then turned to a Lopez return.

The Athletic reported that Lopez’ father stated: “I think I can convince my son to fight him again. It’s going to be the biggest fight in the world.”

Lopez’s manager, David McWater, also chimed in, saying: “We’ll do that fight tomorrow as long as Lomachenko agrees to fight for what we did: $1.35 million.

“We took that first fight without a rematch clause and got treated like s**t throughout. So [Lomachenko] can fight us on pay-per-view, take the same money we did, or otherwise go f*** himself.”

When these comments were put to Lomachenko himself by a reporter, he said: “You ask me about money? I’ve always told you it’s all about legacy.” In fairness to him, that’s true – he took a slight paycut in order to get the first Lopez fight made.

Is it fair for Lopez’ team to make such demands? Not particularly, as the two scenarios aren’t interchangeable. Lomachenko is a much more proven commodity than Lopez was prior to their first fight and so can command a bigger purse, plus there are the aforementioned concessions he himself made to get the fight done.

Lopez first needs to recover from Covid-19 and then defeat mandatory challenger George Kambosos Jnr, but if he can do that then a Lomachenko rematch looks likely and clearly makes the most sense.

The lawsuit claims that Attar was negotiating for Pacquiao to fight Mikey Garcia as part of a multi-fight deal that was initially supposed to include a bout with McGregor, though that plan was ruined when he lost to Dustin Poirier in the UFC earlier this year.

We all thought Wilder and his team were barking up the wrong tree when they were pursuing a third Tyson Fury fight in the courts, and look what happened there, so who really knows what’ll happen here. If Pacquiao-Spence also gets scrapped because of legal red tape, maybe we should all pack it in and just watch Law and Order instead.

Anthony Joshua sat down with Sky Sports to discuss his next steps and the aborted Fury megafight, and seemed notably fed up with all that’s been going on. He was pointedly critical of Wilder, insisting that he isn’t an “elite fighter” and looks forward to “kicking his arse.”

He also criticised Fury and his team for their handling of negotiations and the Wilder court arbitration, though claimed that he still intends to fight his fellow Brit at the end of the year. On the surface, Joshua’s comments may seem fairly standard but it’ll be interesting to see if he brings this no-nonsense energy to future fights and media obligations.

DAZN and Matchroom Boxing unveiled their new broadcast team and it’s a genuinely impressive line-up that is covered in more detail elsewhere in this issue. That being said, there was somewhat of a backlash against the announcement of presenters Laura Woods and Maya Jama.

Beside the worrying optics of some fans only having a problem with the two women on the broadcast team, their criticisms also seemed very premature. Woods is a seasoned and excellent sports presenter while Jama is a charismatic and popular broadcaster herself who will bring a fresh energy to broadcasts.