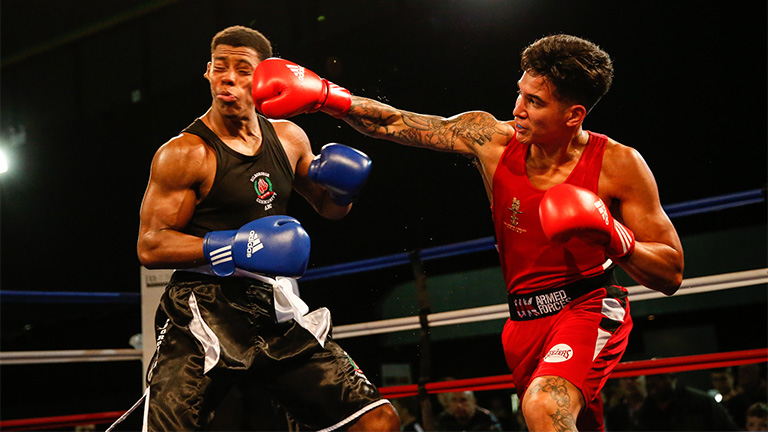 Are you recovering from an injury?

So I had the South East Asian Games around November time and I incurred an injury when I was boxing against Vietnam in the first preliminary round. I fractured my hand against him and it’s been on the mend since.

With that Asian qualifier now rescheduled to start on March 3, will you recover in time for that?

This is really good news for me. I’ve just been home, spent a little bit of down time, I haven’t been home for three or four months, so I spent it with my children and my family.

My son’s three and my daughter’s nine. You miss everything, birthdays, Christmas, New Year’s, everything with them. The sacrifice is real. I need to make sure it’s all worth it in the end.

And being an Army boxer means you’ve got a steady career as a soldier but you can pursue your boxing as well.

Thanks to the Army and the regiment, the Princess of Wales Royal regiment, I want to thank all of them for helping to get me where I am. They’re all very supportive and pushing me through with regard to my dream of becoming an Olympian.

What is it like training with the Philippines team?

It’s quite brutal to be honest. It’s different compared to over here. Obviously the living conditions and the culture and everything, it’s a lot different. But it’s second to none. The majority of our coaches are Olympians. We’ve got Roel Velasco as a coach, he’s a bronze medallist from 1992 in the Olympics in Barcelona and his brother [Mansueto] is a silver medallist from Atlanta. We’ve got loads of experience with the coaching.

It is brutal and raw but it’s worth it.

They are very, very hungry over there. We’ve got six, seven days a week training when we’re over there. Any money that’s left over, it doesn’t go on trainers or anything, it goes to their families to put food on the table. That’s what they’re training for, that’s what they’re fighting for. Being around that hunger and that training establishment with people with that sort of mindset brings out the best in you.

The sparring’s brutal. It is quite raw, considering. My main sparring partner is Eumir Marcial. He’s the middleweight. He got the silver medal in the World championships just gone. He’s doing really well. He’s my main sparring partner but we get people coming over from Australia and we go to places like China, Kazakhstan and doing tournaments there, India, all over Asia.

It is tough but the only way is up and I’m here to learn… We do have some mad wars in the ring but it’s all good after. We’ve got the same goal, we’ve all got the same mindset.