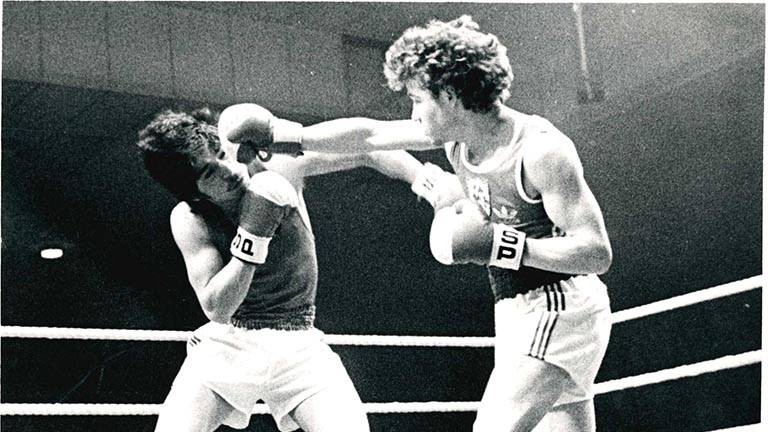 I WAS delighted to hear from regular correspondent Denis O’Hara that the newly-revamped Northern Ireland EBA’s inaugural social evening, at The National Club in Belfast, was a huge success. The do was organised by Association officials (and former pro featherweights) Sammy Vernon and Olympian Seanie McCafferty. The musical backing of Wheelhouse brought out the best vocal talents from the members, including Martin Hamill. Providing a special act was ex-pro lightweight Jim Jordan, who lost to Scottish legend Dick McTaggart in the 1958 Empire Games in Cardiff.

Seanie McCafferty said: “It was quite a relief to get the show on the road for the Ex-Boxers – a very encouraging start for the Association. It proved to the old fighters that they have not been forgotten. The night of excellent entertainment was not solely about retired Belfast boxers, but also those from around the Province. Personally, I was delighted with our first social evening, and particularly the excellent singing of Martin Hamill. I spent the early part of the evening on the door, greeting fighters like Paddy Moore and the Belfast brothers, Pat and Tommy Campbell. It was also very gratifying to have so many fighters come into the city from up-country, including Roy Webb [pictured above], Damien McDermott, Gerry Hamill and Johnny Thompson. There was a bit of a clash of interest as the Ulster amateur senior finals were also staged that night, in the nearby Dockers’ Club. Fourteen tickets were sold but not taken up by ex-boxers, including one by my son Barry, as they attended the amateur contests.”

I recall Roy Webb, a Commonwealth Games silver medallist, as a useful pro, whom I saw inflicting the first pro defeat on future two-weight champion (and world title challenger) Billy Hardy in a great six-rounder at London’s Grosvenor House in 1984. He was full of praise for the evening.

“It was an excellent night of entertainment, and great to meet up with so many friends I hadn’t seen in such a long time. I chatted with Stevie Hanna of the Oliver Plunkett Club, Belfast, who boxed in the Ulster amateur finals. I also met – for the first time in over 30 years – my one-time sparring partner, Mark Owen, who came up to the do from Derry with another ex-amateur and professional, Damien McDermott. It was superb to talk over old times with my Holy Family, Belfast club-mate and Commonwealth Games gold medallist Gerry Hamill. I also met up with my one-time trainer, Bobby McAllister – son of the late, great Belfast pro welterweight, Patsy Quinn. Bobby celebrates his 83rd birthday in November. All in all, a very enjoyable experience, and I hope there will be more occasions like this.”

I’m sure there will. Congratulations to Sammy Vernon and Seanie McCafferty, and everyone else involved – as I’ve said before, these events don’t organise themselves. Good that so many made the effort to attend.

The current Manchester EBA Newsletter records that the Manchester members who attended last month’s do organised by Leeds EBA had a great time. “The day was really organised well with… ex-boxers and members from Manchester, Merseyside and Leeds… Thanks to everyone from Leeds for a really great day and hopefully we will see everyone again at the MEBA Christmas party.” This takes place on Sunday November 24 at the Lightbourne Social Club, Kenyon Lane, Moston – tickets are now on sale, price £5 per head, and any prizes for the raffle will be most welcome.

Sadly, the newsletter also reports that committee member Ian Baynham and regular member Peter Fillingham are in hospital, and I’m sure everyone wishes them both a full and speedy recovery. On a happier note, congratulations are due to Joe and Janet Kirby on their 59th wedding anniversary.

Croydon EBA members please note – this month’s meeting will take place this Sunday, October 20 – a week early – because of the annual Sunday Roast on October 27.