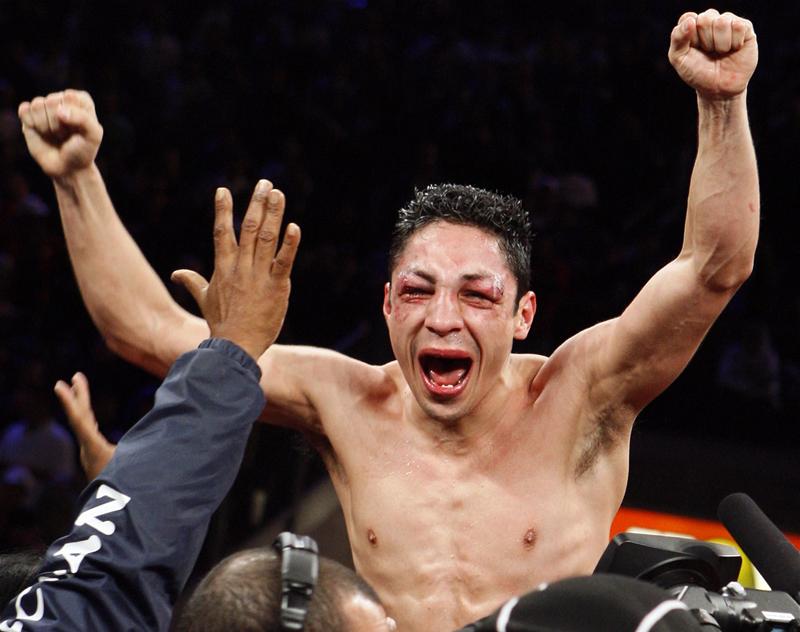 Mexican warrior Israel Vazquez, with his thrillingly unforgettable rivalry with another Mexican great in Rafael Marquez, more than earned his place alongside the special fighters his homeland has produced over the years. The two fierce yet respectful rivals gave fans everything they had in three of the four breathtaking battles they engaged in.

It is due to the skill, guts and brains he displayed in these wars that Vazquez is best known, yet “Magnifico,” who retired with a 44-5(32) record in May of 2010, took part in a number of other memorable encounters. The super-bantamweight turned pro in 1995 and, like most Mexican fighters, he was moved fast; being matched with future world champion Oscar Larios in just his 13th pro bout. Larios – yet another Mexican star from the conveyer belt of champions that special fighting country has given us – was sporting a 20-0 record, and after the initial fight, won by Vazquez via first-round knockout, another rivalry was born.

“The first time I fought Oscar Larios, I was given just a week’s notice before the fight,” 36-year-old Vazquez says from his recently opened gym, “Magnifico Boxing Gym” in South Gate, California.

“I had just fought Eric Lopez (w rsf 3) and then I was told I’d be fighting next Saturday and that was the shortest recovery period I’d ever had after a fight. I didn’t even know who I was fighting but it became one of my best moments. I saw Larios that night and I knew I had to give it my best. I noticed that my punches spun him and wobbled him when I hit him, so I went at him hard. I realised that night that I had stopped an unbeaten fighter, and that was very big for me. That win put me in the WBC top-10 at super-bantamweight.”

Vasquez enjoyed an active 1997 (four wins) and 1998 (six wins) before being set back a little by a 12-round split decision loss to Marcos Licona in ‘99. Bouncing back with a dozen victories, including an NABF super-bantam title win over Don Don Concepcion in January of 2001 (TKO3), Vazquez was closing in on his first world title shot. When it came, in May of 2002, Vazquez once again found himself squaring up with Larios – even though Oscar was brought in as a replacement foe for the fight that would contest the interim WBC belt.

“The second fight [with Larios], I had been training at Big Bear, I had six weeks of good preparation for Willie Jorrin, a fighter who had much shorter arms [than Larios],” Vazquez, who talks well despite the brutality of his career, explains.

“Willie unfortunately injured his leg so instead I fought Larios, who was ranked WBC number-7 and I was WBC number-1. So I had been training for a totally different style, but that’s no excuse. Larios had very good leg movement [that night] and he hit me hard and I suffered blurred vision. He knocked me down and when I got up I still had blurred vision and we were now one and one.”

After suffering the 12th-round TKO loss at the hands of Larios, Vazquez reeled off three straight wins before being rewarded with another title crack; this time the vacant IBF super-bantam belt. The win that followed and the realising of a lifelong dream still means the world to the fighter who was born on Christmas day in 1977.

“I was coming off the loss to Oscar Larios so to have got another world title opportunity was a huge thing for me, a huge opportunity. I knew I had to go and get it, to give my all. I always gave me best, every singe time I fought, but it was a dream of mine to become a world champion and I accomplished that. During the fight with Jose Luis Valbuena (a 24-2-1 southpaw from Venezuela who Vazquez stopped in the 12th-round) every word Freddie Roach and Justine Fortune were telling me in the corner, I was listening to. It was a great thing for me, to knockout a fighter who had never been stopped before. It’s impossible to put that win into words really, but if I had to rate that special moment in my life on a scale of 1 to 100, I’d give it 101!”

Now a world ruler, Vazquez retained his IBF prize twice, before vacating and going after old foe Larios and his WBC crown. The rubber-match took place in December of 2005.

“The third fight with Oscar Larios, that was one of my most satisfying victories. For the third fight, I was properly prepared and for the first time I really knew what I was in for. I was ready for him this time. With that win (3rd-round TKO) I added The Ring Magazine title to my WBC title.”

Vazquez had won the series with a win that came about due to a badly cut eye suffered by Larios and, after an up from the floor win over Jhonny Gonzalez  – “Jhonny is up there with the toughest guys I fought. He knocked me down twice before I came back to get the (10th-round stoppage) win. Jhonny gave me a very tough fight.” –  it was on to his most famous ring rivalry. Enter Rafael Marquez.

Stopped in the first encounter when a broken nose forced him to remain on his stool after the 7th-round in March of 2007, Vazquez came back with a vengeance five months later.

“Rafael Marquez was very tough, no doubt about it. He was a great fighter. Of our four fights, I’d have to say the second fight (Vasquez w rsf 6) means the most to me today – first of all, because I got my title back, which I felt belonged to me (laughs), and secondly, because I’d lost due to a broken nose in the first fight and I wanted to come back and prove what I could do. I came back and proved I was stronger than ever. I did my job.”

The third war (all three contesting the WBC title) came one year and two days after the first bruising showdown. This time the three judges were needed and Vazquez prevailed via a blisteringly hard-fought 12-round split decision. But he had paid a price, his eye needing multiple surgeries for a torn retina. It would be some 20-months before Vasquez fought again. When he did, and after a comeback win over Angel Antonio Priolo (WKO9), Vazquez received a career-high payday of $800,000 for a fourth battle with Marquez.

By now past his best, his eye never fully recovering from the punishment it took in the first three slugfests with the rival he had traded leather and knockdowns with, Vazquez was beaten with some ease, losing the clash that contested the vacant WBC Silver title inside just three-rounds. Still, Vazquez – who could have walked away having won a trilogy with Marquez – has no regrets about taking the May 2010 fight.

“I have no regrets about taking the fourth fight. Yes, I suffered a cut [eye], but I suffered the same cut in the second fight but I came back and stopped him that time. So I could maybe have done that in the fourth fight, but Marquez got me first. I have no regrets at all about my career and I wouldn’t change a thing. The reason is, if things had been different, I wouldn’t be the man I am today.”

Today Vazquez is a well respected former champion who owns and runs his own gym. A man who constantly sets himself goals, “Magnifico” now aims to become a trainer of champions.

“Today I have my own gym and I’m a man who loves challenges, and now I want to accomplish a new goal: I want to become a world class trainer, and work the corner in big fights. I have the knowledge, the technique and the passion. I am training young fighters right now and I am working towards getting that first world champion. I have no idea how long it will take, but right now I am working on getting that first champion.”

Israel encountered a wholly different task this past June; that of keeping his cool when a famous singer from his homeland took it upon himself to deface Vazquez’ prized WBC belt. At a charity rodeo in California, Vazquez got talking to Larry Hernandez, a celebrity who felt he was a “bad ass.”

Despite telling the singer three times not to sign his green belt, Hernandez ignored the man who spilt blood to earn the championship strap. Vazquez was naturally furious when Hernandez scrawled his name across his prized possession.

“He asked me three times if he could sign it,” Vazquez says angrily. “And three times I told him not to. Then he grabbed my belt and signed it. He told me he is a ‘bad ass.’ Since that day, people have asked me why I didn’t punch him. But I was there as an ambassador for the WBC, I am a better person than that [hitting Hernandez].”

The incident drew much media attention throughout Mexico, attention Vazquez could have done without. Still, though Hernandez failed to respect Vazquez, fight fans the world over have more class.  And on the subject of how he would like to be remembered for his terrific fighting career, Vazquez says it means a lot to him that the fans remember him as a great fighter.

“During my career, it was another dream of mine to become the best fighter in the world, pound-for-pound, and I feel I came close to doing that. Now, I really want the fans to remember me as one of the greatest fighters. That means a lot to me. I feel those moments from my life, when I was fighting, were beautiful things to remember. Those fights are my legacy in a way, for my kids and my family to look at. I want to be immortalized and to be remembered as a legend. I do think about going into The Hall of Fame one day, and it would be a real honour to be inducted. But if I don’t make it in, it doesn’t matter; as long as Rafael Marquez makes it in!”