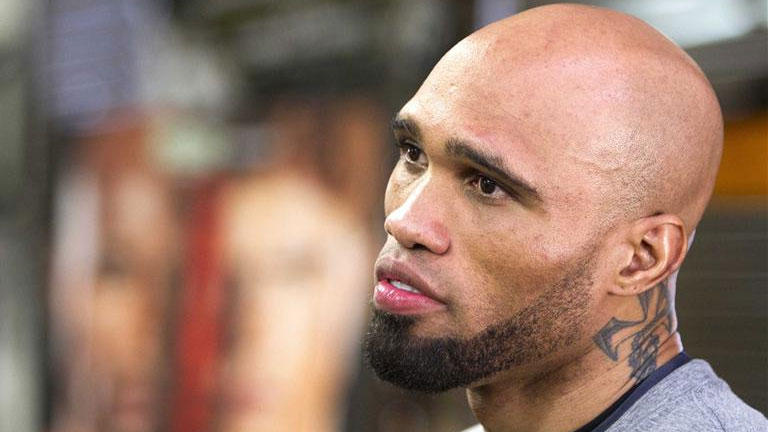 PRESS CONFERENCES designed to promote the undercard of fights often have the reverse effect. Lots of fighters are presented to the media; in turn they shuffle up to the microphone, thank everyone and everything, explain how hard they’ve trained, and then promise that it’s going to be a great fight.

Today’s presser, staged at the MGM Grand and featuring the supporting cast of the Floyd Mayweather-Andre Berto show, was heading down a similar path. Vanes Martirosyan, all smiles, got up to say a few words about his encounter with former IBF light-middleweight boss, Ishe Smith.

“I had a really good camp,” he said after the customary thanks. “I’m excited and happy to be here. Ishe Smith is a good fighter, a good veteran, and I have a lot of respect for him.”

So far, so dull. And then Smith got up.

“I’m going to say a few things and I might offend a few people,” he began.

“The media, and I do appreciate you guys,” he said. “But some of you guys are like leeches. You leech on to the fighters and you the life out of us and then you’re done with us.”

“I watched a tremendous guy like Floyd Mayweather take half the promotional fighters that these big promoters have and he’s made three world champions in two-and-a-half, three years. He’s had no praise, no applause, no nothing.”

Smith then switched his attention to a rival promoter.

“You have a guy who has admitted he has cheated on his wife, does drugs, and dresses in fishnets, and now he’s the saviour of boxing. He’s helped clean up the sport and save the sport? That’s fine and dandy but we [Team Mayweather] get no good press. I feed the homeless, I do back to school drives, I get no press.

“I’m 37 years alive and I’ve never been arrested. I’m more proud of that than being [IBF light-middleweight] world champion, growing up in north Las Vegas.

“I don’t want praise for what I do. Right now I’m in quarrel with my ex-wife trying to get custody of my three kids,” Smith continued. “She assaulted me, that won’t make the news.”

“You guys have got to decide if you’re going to report on the sport, and report the facts, or are you going to talk shit and be fans. First of all you were hating on Al Haymon but the man is doing a tremendous job with the sport. PBC is on almost every week. He’s putting on tremendous fights. I know he don’t want the praise but he’s doing a wonderful thing for the sport. People wanna sue him and this and that, but he’s putting more money in the fighters’ pockets. Some of these other promoters, they suck you dry. I made $11,000 for one fight, I had no choice, I had to do it. When I got my cheque it was $3,000. That’s the shit that don’t get reported. I fought one of the hardest punchers in the game, for 12 rounds, and I get $3,000 and I’m ridiculed. Some of it I brought on myself as a young kid, but a lot of it I didn’t. A lot of you don’t like me and you don’t even know me.”

“Vanes is a hell of a fighter but I’ve got to win. I’m always battling. I was born without a father. He didn’t take the time to raise me,” Smith continued before referencing accusations that Mayweather has violated drug laws. “You ain’t gonna report that about me. You’re gonna talk about an IV that a man got, that athletes get all the damn time. Football players, basketball players, they’ve all got it. You’re going to talk about all the negatives you can find. You can’t appreciate what the man did since he turned professional. He’s trying to match Rocky Marciano but you all going to report on the negative. That’s alright, you’ve got a job to do but report on the positives. We do a lot of positive shit in this community but you don’t want that, you want the bad shit. I ain’t ever gonna give you something bad, so don’t even wait on it.”

Smith then returned to the subject of his impending fight with Martirosyan. Sort of.

“Like I say, Vanes is a good fighter, it’s going to be a hell of a fight and I know I’ve got to win.

“I appreciate Mayweather Promotions and everything they’ve done for me… Poor little kid from Las Vegas, all the promoters gave up on me and Leonard Ellerbe and Floyd said, ‘You know what? We got your back. Three years later I’m about to break a million. Shit, I ain’t got nothing to say. Thank you.”

No, Ishe, thank you.