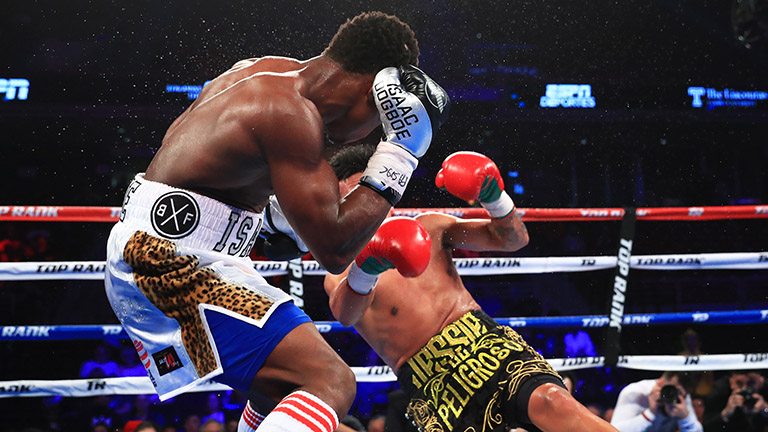 ISAAC DOGBOE halted Jessie Magdaleno at 1-38 of the 11th round to win the WBO super-bantamweight world title.

Dogboe had to rise from the canvas in the first round but went on to knock the American down three times in the fight and force the stoppage in the 11th round at the Liacouras Center in Philadelphia.

“This is a great feeling. Azumah Nelson [of Ghana] did it, and now I can call myself a champion,” Dogboe told ESPN. “First rounds are always dangerous, but I gathered myself and did what I had to do. I appreciate all the support, and I want to thank for my team for making this happen.”

“He was the better man tonight. He did what he had to do,” Magdaleno admitted. “The inactivity got to me, but I don’t want to take anything away from Isaac. He is a great warrior. He got a great opportunity, and he took it. I wish nothing but the best to him.”

Dogboe is of Ghanaian descent and grew up in London. He plans to return to Britain and start university. He is still on 23 years old.

On the undercard Jesse Hart took a stoppage win over Demond Nicholson, inside the seventh round.