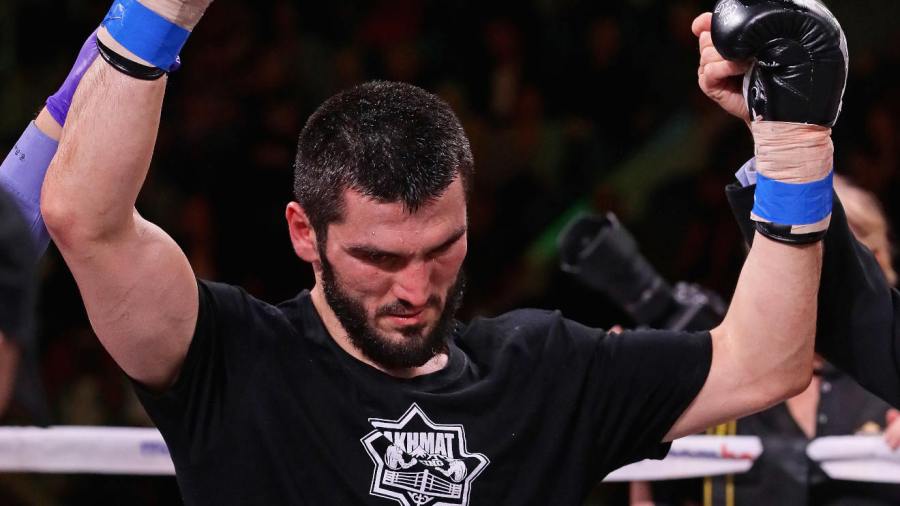 FOR large chunks of his WBC and IBF light-heavyweight title defence against Adam Deines, Artur Beterbiev looked so bored it was difficult to not feel exactly the same as we watched. Though the Russian achieved victory – clubbing the rank outsider into submission in the 10th round to score his 16th KO in 16 contests – he laboured to such an extent many are now suggesting he’s past his best at 36 years old.

Clues to that decline were rife inside Moscow’s Khodynka Ice Palace. Dienes was rarely pressured even when in obvious trouble. Beterbiev’s punches were too often wayward and his feet at times clumsy. And though a long way behind on the cards (90-80, 89-81 and 88-82 at the time of the stoppage) the challenger had no trouble clumping the champion with counters through the middle. However, given that 519 days had elapsed between this and Beterbiev’s previous outing, it’s only fair to collate more evidence – gained from more worthwhile outings than this one – before writing him off.

This contest served a purpose in that it ended a long layoff but it’s unlikely Beterbiev felt any fear whatsoever heading into this bout. All fighters, even those as seemingly fearless as Beterbiev, need to feel fear or least a trace of it. Deines, born in Russia but fighting out of Germany, had been handily outscored in his only previous foray into anything approaching world class (Fanlong Meng duffed him up over 12 in 2019) and simply had no business challenging the 1/33 favourite. Such lopsided matchmaking should not be allowed at world title level but it happens regardless and Deines – keen to make the most of his golden ticket – was inspired in a way that Beterbiev simply couldn’t have been. One should also consider that beforehand the champion spoke of being “very sick” for 10 days after contracting Covid-19, the virus and pandemic that resulted in six proposed dates for Beterbiev returning to action after his 2019 win over Oleksandr Gvodzyk being cancelled. So through a potential cocktail of ring rust, weariness and Deines fighting out of his skin, “The Beast” was, even though largely dominant, a long way below par. Only time will tell if ageing was a factor, too.

As early as the opening round he looked out of sorts. Deines bowled over his southpaw left hand that found a home in Beterbiev’s immaculate thick black beard and nudged the champion backwards. However, at the end of the session it looked like the thrashing we all expected would play out; Beterbiev bundled Deines into position, scored with a cuffing right, left, right – none of which appeared to land flush – to score a legitimate knockdown. Like the fight, it was a scruffy fall.

Deines had recovered by the second. Though Beterbiev’s work was crisper it was the 30-year-old’s that caught the eye, largely because the ease in which he caught the favourite was unexpected. But Beterbiev, for all his pound for pound qualities, has never been known for elusiveness.

The pattern continued through rounds three, four and five. The champion stalked, landed regularly but simply could not avoid the regular counters coming back. Perhaps the truth was, because he was never hurt or uncomfortable, it was simply not worth the effort of trying to. There was a marked improvement from Beterbiev in the sixth when Deines rocked and reeled as the pressure increased. But in the seventh, eighth and ninth Artur was lacklustre again, summoning only the kind of effort required to get through an untaxing spar. After getting the last of numerous rollockings from trainer Marc Ramsey, Beterbiev went out in the 10th and ended the exercise. A short jolting right hand, flung as the tiring Deines was on the attack himself, sent the brave challenger to the deck and the towel from the corner to come in. Referee Yury Kopstev called a halt at 1-34.

“The fight dragged on a bit, of course,” said Beterbiev. “My coach told me in the eighth or ninth round to wake up. I slept a bit today. Of course, this does not detract from the work of my opponent. He is a fine fellow, he worked well, he acquitted himself well.”

Indeed he did. But don’t expect to see Deines troubling any of the light-heavyweight leaders in the near future. The same can’t be said about Beterbiev, at least not yet.

The Verdict Beterbiev fails to impress but it’s far too soon to write him off.