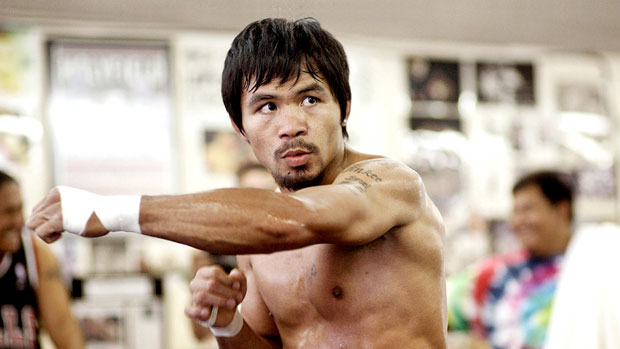 THE date and venue have been set for Manny Pacquiao’s next adventure, but the opponent joining him at Venetian in Macau on November 22 is still up for debate. Ruslan Provodnikov looked likely until he was upset by Chris Algieri, and recently Amir Khan has announced he would love the chance to tackle his old stablemate. Terrence Crawford’s bashing of Yuriorkis Gamboa elevated his standing, and Mexican veteran Juan Manuel Marquez will forever be linked to his dance partner from hell.

Why it could happen: Khan proved, while hammering Luis Collazo, that he is one of the best welterweights in the world and a scrap with Pacquiao could be an absolute thriller. By November 22, his body will be fully recharged from the strains of Ramadan – a factor in him missing out on the September date with Floyd Mayweather – and with Amir and Manny former stablemates at Freddie Roach’s Wild Card Gym, this would be easy to sell.

Why it won’t happen: The Brit is signed to Golden Boy, and although there have been signs that Top Rank are willing to work alongside their promotional rivals, it seems exceptionally unlikely that either party would allow this fight to happen. The Macau venue is very much Top Rank territory, and not one they’d want to share at this stage. Even Al Haymon, Khan’s influential advisor, may struggle to make this happen.

Why it could happen: Crawford punched holes through Yuriorkis Gamboa to showcase his potential to the world. A fight against fellow Top Ranker Pacquiao would be fascinating. The fight might appeal to Manny, who would know a convincing win over Crawford – suddenly labelled a future superstar – would close any mouths declaring his career is as good as over.

Why it won’t happen: It’s too early for Crawford for a number of reasons. Despite the Gamboa constriction, he is a novice at world level and currently campaigns at lightweight. Although Pac Man could make light-welter, it’s unlikely he’d drop down, making it necessary for Crawford to jump two classes to 147. Top Rank will be aware of Crawford’s potential, and throwing him in with Pacquiao at this stage could dramatically curtail his impressive progress – and future earning potential.

Why it could happen: They go together like rama lama lama ka dinga da dinga dong. Each of the previous four meetings were thrillers – particularly their most recent – and despite the marathon they have shared so far, the finishing ribbon remains unbroken. The opening three fights all ended with controversial decisions (two for Pacquiao and a draw), while Marquez won the fourth via brutal knockout. Again, this would not be difficult to market, and with both aligned to Top Rank, negotiations would run smooth.

Why it won’t happen: Marquez seems content, for the time being at least, not to pursue this rivalry. The fourth fight enjoyed the most definitive conclusion and, although he failed to win any of the previous three, he is perhaps the moral leader in the series. Bob Arum might not be willing to make this one just yet because defeat to Manny would be a possibility, and it would be a reverse his career would struggle to recover from. Also consider that demand for part five is not high, and the veteran promoter may hold out until interest increases again.

Why it could happen: It seemed allRuslan Provodnikov had to do to secure the Pacquiao date was beat Chris Algieri. But the underdog triumphed in a cracking fight to put himself in the frame. Algieri exhibited courage in battle, and oozed charisma afterwards, and may be deemed as low risk foe for Pacquiao to close out his year. Easy fight to make.

Why it won’t happen: Despite the win over Provodnikov, Algieri is the least famous name on this list. If the Timothy Bradley return didn’t sell well, this most certainly won’t. Algieri is at light-welterweight too, and although his stick-and-move style could give Pacquiao fits, the New Yorker would be a massive underdog in the eyes of fans. And Manny has reached a stage where he must feel challenged, but this assignment would test his wandering focus to the max.

Why it could happen: Despite his loss to Algieri, Provodnikov retains his high standing due to his all-action style. The points reverse was controversial, too. This is the fight Bob Arum originally wanted with good reason: action sells, and this almost guarantees it. The promoter had no issue with throwing Brandon Rios in with his prized charge after a loss, so it’s unlikely that will put him off here. Pacquiao and Provodnikov are also gym mates and would welcome a scrap knowing each is guaranteed to attack. The Russian has also confirmed that he will be fighting on November 22 in China.

Why it won’t happen: There may be objection from fans if Provodnikov jumps from a loss into the biggest fight of his life. Certainly, the odds on a Pacquiao victory will have dropped since the Algieri fight and, as a result, some of the intrigue has gone. The logical step would be for Provodnikov to fight on the Macau undercard. Also, Freddie Roach would be forced to choose who he trains as both have made their names with him as their wingman.