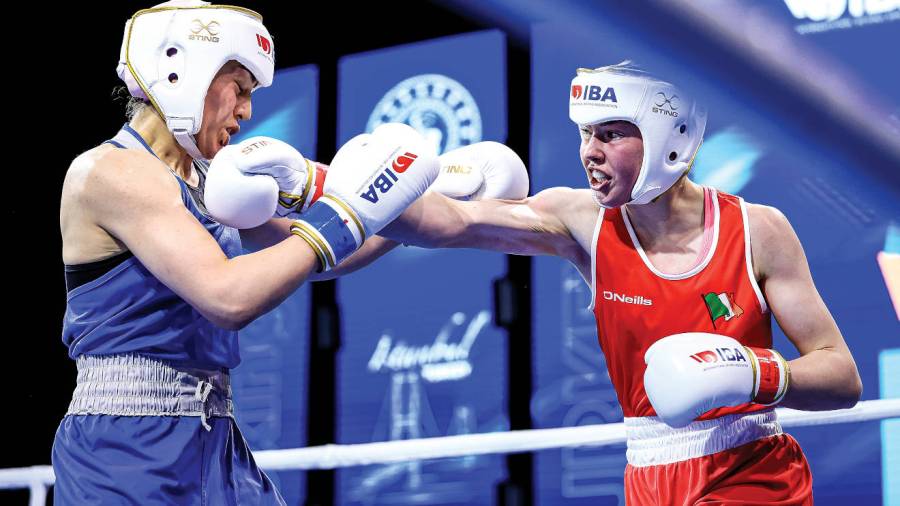 GB hopes miss out in the World championship quarter-finals, while two Irish boxers are in the medals

Tokyo Olympian Charley Davison chalked up two victories to reach the final eight at the Basaksehir Youth and Sports Facility in Istanbul, Turkey. She met India’s Nikhat Zareen in their 52kgs quarter-final. Zareen started busily, catching the English southpaw with head shots to just edge her out of the first round. The Indian maintained her aggression in the second and, somewhat harshly, the referee deducted a point from Davison for holding. A determined Davison drove Zareen back in the third but could not recover the deficit. The Indian boxer took a unanimous decision.

But she came up against host nation light-flyweight Ayse Cagirir who eliminated her from the tournament on a unanimous decision. The bout was often scrappy but Cagirir was effective when she burst forward off the backfoot to catch out Resztan with clusters of shots.

With Lauren Price having turned professional, Kerry Davis stepped up to become GB’s middleweight number one. She won her opening contest over India’s Saweety Boora on a split decision. But then France’s experienced Davina Michel unanimously outscored her.

Light-middleweight Cindy Ngamba trains with GB but was competing at these World championships with the Fair Chance refugee team supported by IBA. The strong light-middleweight won her first bout in Turkey, beating India’s Lovlina Borgohain on a split decision. But Mozambique’s Alcinda Panguana scored a surprise split decision win to beat Ngamba in their 70kgs quarter-final. Ngamba advanced aggressively, landing heavy crosses repeatedly. But Panguana, a southpaw, stayed resolutely on the backfoot, picking away at Ngamba’s guard with long shots to take her points win.
Although Rosie Eccles was bitterly disappointed to lose in her opening contest, the quality Welsh boxer will be a medal contender in tournaments to come. She didn’t get the verdict against Charlie Cavanagh, a split decision went to the Canadian, but Eccles has beaten Olympians previously and will be formidable at 66kgs in future.

Ireland’s team has impressed at the championships in Istanbul. Even with two Olympians, Michaela Walsh and Aoife O’Rourke, missing out on medals themselves, two Irish boxers reached the semi-finals. Lisa O’Rourke [above], Aoife’s sister, took three unanimous decision wins on her way to the final four, beating Brigitte Mbabi of Congo, Dominica’s Maria Moronta and Armenia’s Ani Hovsepyan.

At 63kgs Amy Broadhurst is another of Ireland’s rising stars. She guaranteed herself a medal with a unanimous points victory over Serbia’s Jelena Janicihevic. Broadhurst dominated her, winning widely on the judges’ cards. Broadhurst took early wins over Croatia’s Sara Beram and Bulgaria’s Aslahan Mehmedova, beating both on unanimous decisions as well.

At 57kgs Michaela Walsh did pick up two wins at the Worlds. She unanimously outscored America’s Amelia Moore before beating Ukraine’s Valeriia Yeroshenko on a split decision. But Kazakhstan’s tricky Karina Ibragimova defeated Walsh on a unanimous points verdict.

Middleweight Aoife O’Rourke met fellow Tokyo Olympian Naomi Graham in her opening contest. The American, a former World medallist and Pan American champion, took the win over her on a split decision.

Ireland’s head coach Zauri Antia said he was “delighted with the performance of each and every Team Ireland boxer so far throughout the women’s World championships”.

“The team selected for this World Championships had a dual purpose – gaining experience and competing for podium paces. The boxers who were in Istanbul for experience all won bouts, and have now contested at world level. The future of Irish boxing is bright,” he added.