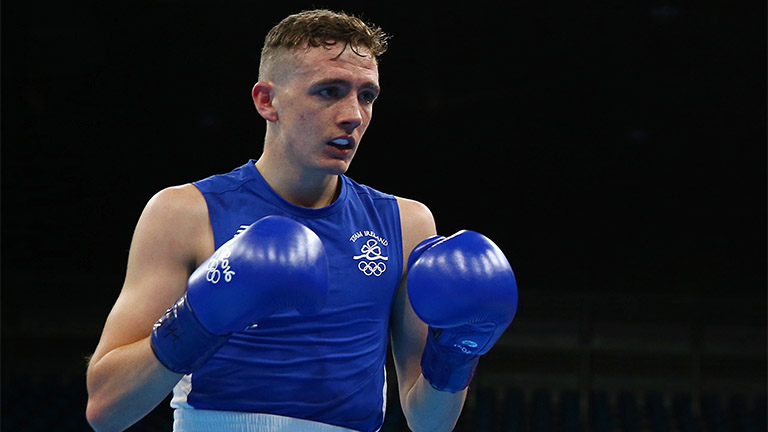 IRELAND have announced their team for the European Olympic qualification event. They won’t have far to travel as the Copper Box in London hosts the event from March 14-24. So the Irish squad can expect good support in the arena.

“We have some really good athletes pushing each other for places, so it has been a challenge to select our squad, but we have picked the best team to compete at the first qualifier in London,” said Bernard Dunne, Ireland’s High Performance director. “We would be looking for some good performances from our team. We have two opportunities to qualify, London and Paris, so we will review the squad post London.”

“Preparations have gone well so far, and we head to Italy on Monday for a sparring camp which will then lead us into the qualifier,” he added. “They’ve worked extremely hard to get to this point, so if they perform to the best of their ability in London, then that is all we can ask of them.”

Their full squad is as follows:

Irvine is a veteran of Ireland’s unfortunate but talented team from the last Olympic Games. He has done well in European level competition in the past, winning a silver medal at the 2017 European championships. He has however had to overcome injury to win his place on this squad.

The reigning gold medallist from last year’s European Games in Minsk, he is one of Ireland’s leading hopes to qualify at this first opportunity. The able featherweight can be expected to resume his rivalry with Britain’s Peter McGrail at some stage of this competition in London.

A national champion Bates will represent Ireland in the new lightweight division, which will prove to be highly competitive internationally. The new lightweight category combines the best of the 60 and 64kgs divisions that preceded it. Armenia’s strong Hovhannes Bachkov, a 2016 Olympian, will probably be the man to beat at the Copper Box. He has a host of major medals, including winning the European championships and the European Games as well as a World bronze. France, Russia and more will all be strong in this weight class too. A battle awaits all the boxers here.

Aidan Walsh travels to this tournament with his sister Michaela also on the team at featherweight. Walsh did reach the final of the Commonwealth Games in 2018. He was handily outboxed by England’s Pat McCormack then. McCormack also eliminated him in the preliminary stages of the World championships last year but Walsh is young, still only 22, and improving.

Ireland did have options at 75kgs. Gabriel Dossen is a talent, picking up a silver medal at the recent Bocskai tournament. But ultimately Michael Nevin is more proven. He did well as a Youth boxer and secured a bronze medal at the European Games. Six Olympic places are available in this division at the Copper Box and Nevin ought to be in the frame.

For many years Joe Ward has been Ireland’s star man, making the light-heavyweight berth his own. While Ward was unfortunate at the Olympics themselves, he had excelled in tournaments across the continent. There were high hopes for him in this cycle but Ward turned professional, leaving big boots to fill. Emmett Brennan is the man to step into them.

Heavyweight and super-heavyweight are the divisions with the least Olympic quota places available in this competition. The boxers here have to reach the semi-finals to be sure of a spot at the Tokyo 2020. Kiril Afanasev has gained international experience but has the tough task on taking on the rugged competitors that populate this weight class.

Dean Gardiner is an experienced campaigner. He has featured in European championships and over the years has boxed against some of the continent’s finest super-heavyweights, Magomedrasul Majidov, Frazer Clarke and Guido Vianello included. At his age, 31 now, he won’t get too many more shots at Olympic qualification.

In the qualifier at the Copper Box Russia’s Liliya Aetbaeva and Turkey’s Buse Naz Çakıroğlu are likely to be the dominant boxers in the women’s flyweight division. Ceire Smith was good enough to reach the last 16 in the World championships but Cakiroglu has beaten her before, so the draw will be interesting to see here.

Michaela Walsh rose to prominence by giving Olympic champion Nicola Adams a hard bout in the Commonwealth Games final all the way back in 2014. Featherweight though is a division that suits her well, she has already medalled in European competition. At this tournament she could play a starring role.

Being the heir to Katie Taylor is a heavy burden to bear. But Kellie Harrington seems up to the task. She has a World gold medal in her trophy cabinet already and saw off the challenge of Amy Broadhurst to get picked for the first qualification event. She however will not want to miss this opportunity.

Desmond took a big win at the Worlds, beating England’s Sandy Ryan in her opening bout in Russia. She progressed to the quarter-finals there, but the next leap for her is to reach the medal stages of a major competition.

O’Rourke did win the European championships in 2019. That is a significant achievement but not as huge as it would have been in another year. That particular competition was preceded by a European Games, and quickly followed by the World championships. It meant Lauren Price and Nouchka Fontijn, the key boxers at middleweight, were rested for that tournament. However they will both feature at the qualifier in London, making the competition in this category particularly fascinating.