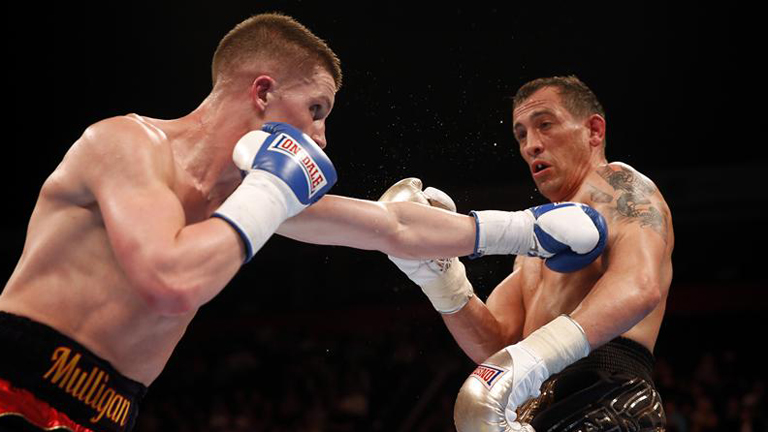 YOU had 29 fights last year. What on earth was that like?

It’s my job at the minute, and while I want to do other things in the future, it’s what I do at the moment. I want to fight as many times as possible, and as often as I can.

Do you enjoy it?

I love it, yeah, I love it. There’s nothing better.

Where did it all begin for you?

The family. Both grandads [Paddy McCauley and Alex Flatman] boxed to a good level. My dad, Thomas McCauley, had 30 or 40 fights as an amateur in Coventry. He done good. I decided to start a bit later on.

You turned professional in 2008, and you’ve since had 129 fights. Does it offend you to be called a ‘journeyman’?

Not at all. I mean, I’d like to tell you the story about how it really is when it’s all done and dusted and I’ve got a few hundred fights under my belt. I’ve won 11 fights, and that’s not really a true figure [of what I’ve deserved]. But we know what goes on in the boxing world, and for half of my fights there could have been a different result. But when you do get to have a go, and you don’t get the nod because you’re up against a big ticket-seller, or you’ve had the same referee as the week before, it’s hard. But you have to keep going and earning money.

Journeymen are inevitably the ‘away’ fighter, the one who is not expected or supposed to win. How many times have you been the ‘home’ fighter in your 129-fight career?

I don’t know, about four? [Laughs]. I was brought up in Brighton, so to get people to travel up to the Midlands [where he lives], and get home fights in Wolverhampton, is quite difficult. I’d just had kids and I made the decision I had to go on the road and get what I can from the sport. I enjoy it, and I know I’m never going to be world champion.

It’s common for the ‘away’ fighter to feel aggrieved, often rightly, by decisions. That sense of injustice must be difficult to deal with so regularly. How hard is it for your pride to deal with?

It’s a kick in the arse if I’m honest. Like I say, I have to fight the young up-and-coming kids, get them through, and make them look good. They’ve got no idea you’re doing that. But when it comes to those fights when you can have a go – and you might have fought the week before, and the week before that – but you have a go and you win, but you don’t get the nod, it’s gutting. You wonder where that kid is going to go because he’s going to fight better fighters than me! It’s really disheartening.

Totally, totally. I had [a four-round draw with debutant Mark Fairweather], up in Scotland, I dropped him, I had him in trouble, and all I got was a draw. I sometimes think it’s the referees who should be getting the eye tests and the medicals, not the boxers [laughs]. But to be fair, it’s their opinion, and they call it as they see it.

I usually know straight away. If I’m psyched up to win, I’ll clown and play up a bit. If I go all out to win in those situations, I’ll struggle to get a fight the next week.

At the start, after three fights, you were 2-1. What were your ambitions as a boxer at that point?

I wanted to win a title, and I did that. I beat Dave Ryan for the Midlands Area [welterweight] title in Derby [w pts 10, February 2010]. I beat Craig Windsor up in Scotland [w pts 10, November 2011], but then I beat a lot of fighters where I didn’t get the nod and it affects your ambition. I started too late. I was 29 when I turned over. I never dreamed that I’d have this many fights and I do enjoy it. I love it. And I get a lot of respect for what I do, and a lot of people know what I do, even some of the kids [young fighters] know that I could give a little bit more when I need to. But it also depends what is going on in my life at the time. It’s hard to fight every Saturday and then get back in the gym on the Monday. But you just crack on with it.

Some journeymen have mentioned in the past that they reach a point in their career, try and take it seriously, and they get a win or two and their phone stops ringing. Is that something you can relate to?

Definitely. I’ll get a win or even a draw, and then the fight I was supposed to be having the week after changes. It doesn’t happen with the small hall fights, but with some of the bigger promoters, the matchmaker will pull them out [of a scheduled fight with me]. They don’t want to take the risk. You can understand that. I thought I bashed up Georgie Kean on the undercard of the [Billy Joe] Saunders-[Chris] Eubank fight at the ExCel [November 2014]. I knocked him down and I only gave him a round, a round-and-a-half maybe, but he gets the win [on points over four]. You have to respect the referee’s decision, you have to get on with it.

What is it like to fight on bills of that magnitude [Saunders-Eubank]?

It’s amazing. It’s a good buzz and you don’t really expect to be there. I’ve already done what I wanted to do in the sport, and I’m just enjoying it now. I would like to win another title. I’d love to fight for another Area title, but I need the referees to give me a few wins when I deserve it. It might help me [laughs]. We’ll see. I reckon I’d give anyone a good run for their money when I’m on form, when I’m up for it, anyone would have to be on their guard.

Do you spend time with the fighters at the top of the bill? Do they respect what you do?

Yes, definitely. I fought Liam Smith [l pts 4] on the [Amir] Khan-[Marco Antonio] Barrera bill [March 2009], and it was gobsmacking, it was overwhelming. It was the first time I’d fought on a bill like that. Liam was only in his third fight and I gave him a nightmare, he got caught with some shots and he was a bit gutted, and he didn’t want to do the interview [afterwards], so his brother Paul, who was also on the bill, did the interview. Both were great guys. When I fought John Thain [l pts 4] in 2010 in Liverpool, John Conteh came up to me afterwards. I remember my dad talking about him! When you have a guy of that calibre come up to you, it means the world, it makes it all worthwhile. They’re all nice guys. There ain’t many I haven’t clicked with.

You clearly enjoy fighting every week. But would you sacrifice all that to be a prospect, with financial backing and all the opportunities that brings?

I think so. I still think about this now. If someone made it easy for me, if they paid me, if I was allowed to get on with it, for it to be my job where I didn’t have to fight every week so I could spend time training, I could shock a lot of people. I can still breathe through my nose, just about, I don’t get hit that much. But that’s not going to happen. I’m married, I’ve got two kids – I’ve got to work.

What do your family make of your job as a boxer?

It’s hard. Very often I’m fighting at weekends and we may have had something planned for the weekend. But they accept it, because without boxing we’d be stuffed. The reason why I do this, the driving force behind what I do, is my wife Dawn and my children, Lily and Harry. I am so grateful for their support.

Are there any concerns, from you or your family, that boxing will affect your health in the future?

No. I don’t think so. I’m still compos mentis, I can still make a cup of tea, I can still string a sentence together [laughs]. I suppose if I started dribbling while I was watching the television they might tell me to retire. I’m alright, I’m applying to get back to university.

What are you hoping to do?

Nursing. I want to be a paramedic. I’ve still got a brain – in the past I’ve worked on building sites and I don’t want to do that when I retire from boxing.

If you could change one thing about the sport, what would it be?

There’s too much ducking and diving in boxing, where fighters avoid each other – usually because of money and promotional reasons. But they should be made to fight each other.