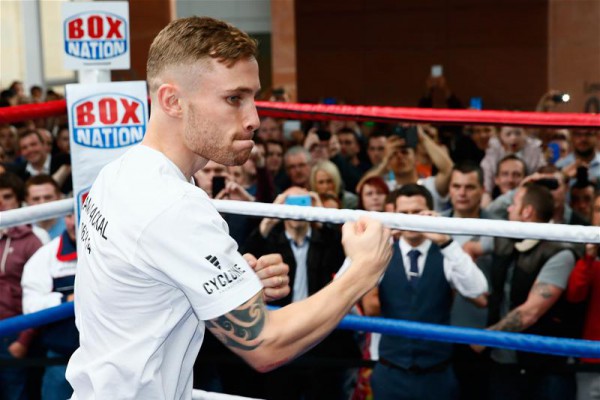 AFTER the fairy tale of winning his world title in a purpose-built arena in Belfast, the real work begins for Carl Frampton – defending his crown and building his profile now on terrestrial television. With ITV showing the event, and February 28 being the limit of the IBF deadline to take on his mandatory challenge, he can’t afford any mistakes in the final days ahead of the fight.

“He’s done all the heavy work so the last week I make sure that the gloves are really well padded, well taped up, there’s no laces loose and that his headguard’s got full protection so he doesn’t pick up any cuts. Because when your weight starts coming down, your skin gets tight to your face, then one punch that glances, if you don’t have enough Vaseline, it suddenly tears the skin and you’ve got a cut,” his trainer Shane McGuigan said.

They have been putting the finishing touches on a training camp that began over 14 weeks earlier. “He doesn’t like to train that much. Certain guys love to be in the gym, love to be training all the time. When he’s in camp, he’s in camp and when he’s out, he kind of relaxes. He’s a family man. I give him weight programmes that he does two or three times a week outside of camp and he does one or two leisurely runs just to keep moderate fitness and his weight in check. That’s why I start with a 14-week period, it’s because the first four-to-five weeks there’s a lot of weight training, a lot of pads and a lot of sprints,” McGuigan explained.

Shane starts him off with seven-round spars straight away, before building up from there. Frampton did his last 12-round spar just over a fortnight before the fight. Then McGuigan brings the number of rounds he does back down. “Eight on Saturday [February 14], which is exactly two weeks out and then he’ll do another eight on the Monday, then he’ll do six and six. We’ll bring it right back down for the last week. That’s when his weight’s under what he’s going to walk in the ring at. So he walks in the ring at a certain weight and does the majority of the hard sparring at that weight. Then, whenever he gets below that I lighten the sparring partners up and do more reaction stuff,” Shane said.

McGuigan takes a scientific approach to training. His methods tend to break away from the usual. “You can only do one hard session a day. If Carl’s sparring on Monday, Wednesday, Friday, we do weights in the evening. If it’s a hard sparring session, it’s not too taxing the weight training. It’s neurally taxing but it’s not going to be exhausting, so the next day he’s fresh. He comes to the gym, if he’s sparred hard on Monday, Wednesday, Friday, the Tuesday and Thursday it’ll be slightly less intense, more pads sessions and I won’t push him too hard. I’ll push him for maybe four or five rounds out of the 12 and the others will be a bit more tactical, we’ll slow it down. I’ll push him in the evenings on the runs, on the sprints,” he noted. “He didn’t do one steady-state run in the whole of the last camp. We used to do one on the Saturday but I just said there’s no point. Just do a circuit. Our bodyweight circuits are pretty intense. We’ve got loads of different formats that I use and you can become adjusted to one format so you’ve got to switch it up. There’s loads of different time variables that we do. Far out it’s more work capacity, less rest. Mid-camp when they start sparring, it’s 50-50, so they’ll rest as much as they work and then the last two weeks, it’s maybe 10 seconds on, 20 seconds off or 30 seconds off. Real, ballistic power stuff.”

He may do things his own way. But Shane is confident in the results they get. “People are quick to judge because I’m very young but the proof’s in the pudding. Carl’s performed very well and he’s getting better. As long as I’ve got his trust, that’s all that really matters to me,” Shane said.

It’s remarkable that McGuigan, only 26 years old, has already guided a boxer to a world title. Key to their success is the relationship between the trainer and the boxer. “You’re only as good as your fighters and if I didn’t have Carl Frampton, where would I be? There’s probably a hell of a lot of good trainers out there but they probably just don’t have the right fighters to be working with,” McGuigan continued. “Every trainer has that one fighter that shows them for what they are.

“My fighter is Carl Frampton.”