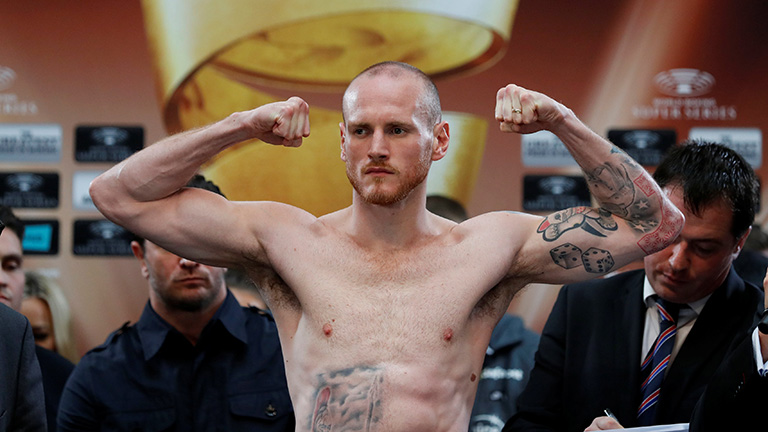 SPARRING with both George Groves and Callum Smith inspired Kody Davies to move all the way down to super-middleweight. As an amateur the Welshman was a 91kgs heavyweight. Hardly fat before, he’s shed an astonishing amount of weight and muscle mass to weigh in at 171lbs for his last fight, a four round points win over Eric Mokonzo last Friday at York Hall.

“His record suggests he’s a journeyman, so to speak,” Davies said of a determined opponent. “I missed out on a few little opportunities.

“My fight previous to this I boxed a guy with a winning record [Przemyslaw Gorgon]. He had six fights, two losses, from Poland. He came to win but I got him out of there with a body shot. Broke two of his ribs as well but he definitely came to win. With Eric Mokonzo, he definitely came to win. His record doesn’t do him justice. He’s a strong guy but I feel that I’m ready to move on from this sort of level now and start to show what I can really do,” Davies continued. “I’m not particularly gunning for anyone, I’m just gunning for titles.”

He describes sharing a ring with both Groves and Smith, who will contest the final of the World Boxing Super Series later this year. “I was sparring George Groves when he was training for Jamie Cox, a southpaw. So I was going up to London doing eight to 10 rounds three times a week with George. Then Joe Gallagher gave us a message, I was sparring with Callum then for his fight against [Juergen] Braehmer, who unfortunately pulled out and they had a replaced. Nevertheless I was their chief sparring partner for that as well. That was the encouragement really for me to drop down to super-middleweight, sparring with the top guys at super-middleweight and sparring well. So it encouraged me to drop the  extra few kilos and get down to the weight and see what I can do in the real ring at fight time,” Davies told Boxing News.

He compared the two fighters, saying, “They’re both very good with their attributes. I think George’s main attribute is his boxing brain and his range. He’s really good at nullifying attacks and things like that. Callum Smith is very good with text book punching, one-two, always very textbook. All the punches are spot on they’re methodical. He gets his bodyweight into this shots.

“I think Callum’s going to be on the front foot. George is going to be nullifying his attacks and that’s where I’m going to leave it…”