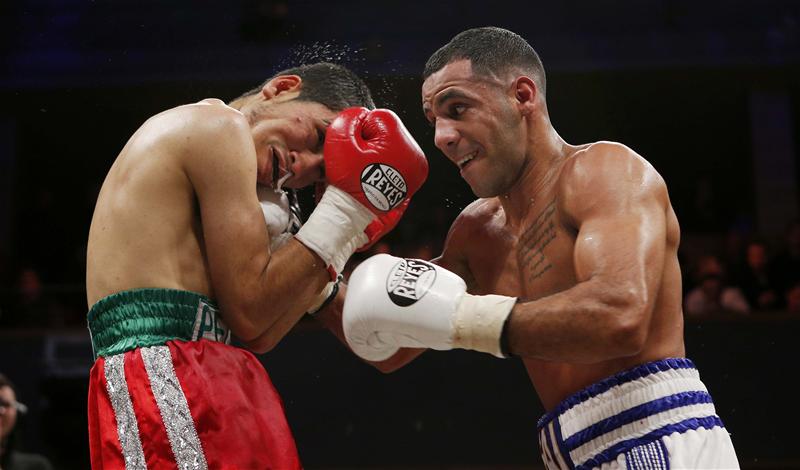 BOXING looks hard enough on fight night, under the pressure of competition, with a thousand pairs of eyes looking on.

It’s harder still alone in the gym, day after day, when, instead of a crowd cheering you on, all you’ve got is a trainer monitoring your performance. As fans we watch the fights but the boxers know that what really counts, what makes the performance, is the work that’s done in the privacy of the gym. Boxing News went to strength and conditioning coach, Des Witter’s gym in Birmingham to see the kind of work hot prospect Kal Yafai puts in behind the scenes.

The Team Des gym is ominously quiet for Yafai’s workout. The equipment is neatly laid out, ready and waiting, with a long track left clear for tyre flips and sprints attached to resistance bands.The circuit Witter takes him through isn’t long, but it forces the lungs and heart to work uncomfortably hard almost at once.

“It’s always hard,” Kal smiles afterwards. “As soon as you walk through that door, it’s go hard or go home.”

He performs explosive exercises that have the legs burning before going into core training that works the whole body.

“You’ve seen a massive difference in Kal. Kal’s come here from when he first turned over, for two years, much more fitness and strength from when he first turned over to where he is now, it’s completely different,” Des said. A boxer should focus on “whole body, core and explosive power, definitely legs. It’s not about how built people are. It’s strength in their legs, not necessarily size, just how explosive they can become. Boxing involves a lot of core and rotational stuff and endurance.”

But Witter cautioned, “You can never represent what happens in the ring in a gym like this. You can just try to obviously improve areas of strength. The main work will come from the sparring and stuff in the ring.”

Over the course of a training camp, further out from a fight, Yafai will do strength work, like this kind of circuit training. As the fight comes closer speed becomes the focus, with an emphasis on track work. All of this fits around his boxing session in the evening, which can include pads, bagwork, groundwork and sparring. “It’s pretty heavy duty. We always spar when we’re half-tired anyway,” Kal reflects. “Because you’re not going to be fresh throughout the whole fight.”

His fitness training will vary to complement what he’s doing in the boxing gym. “We alter it. We normally run. It’s either going to be a five-mile run, it could be on the track doing six-threes, we could be doing sprints. There’s a hill round the corner. There’s stairs. We do hill sprints on the stairs with the weights on our necks,” Yafai said. But probably two days a week they’ll do a circuit instead of running.

AFTER a jog to warm up, Yafai completed three sets, at a good pace, of the following circuit. Go to www.boxingnewsonline.nettv to see the video tutorial of how it’s done.

THE physical demands of my job are, thankfully, limited. I sit, I type, I cogitate, I watch other people box and then immortalise it in the pages of this magazine. But it seemed like a good idea to lay aside my pen and notebook for a moment to try to get a glimpse of the kind of work boxers put themselves through daily.

It may come as little surprise that my attempt to do what a fighter does did not go well for me. I fear I peaked at the first station, flipping the tyre over. While Kal had paced along against the resistance band, I felt I was hammering away on the spot, going nowhere kind of slowly. By then my legs were dead. Yafai, whose brother Gamal [above, right] is a top GB amateur, just hopped on to the plyo box, I could barely make it up there. I was struggling badly in no time. I would have preferred it if the gym had been full, in this situation there was no way of hiding. Or getting out of it.

By the time I got to the dumbbell squat, Des was insisting I squat all the way down, to touch the medicine ball below and burst up with the dumbbells. Fine in theory but it was so low, I ended up having a bit of a sit down on it, struggling to heave myself back up.

On I laboured. I can actually jump, honest. But when I came to the tuck jumps, all I had left was a pathetic hop off the mat. By the end, the only thing that kept me on the treadmill was the desperate fear that I would go flying off the end.

That was only one session, more than enough for me, but these athletes fit them around their boxing sessions throughout the week. “Heavy duty,” indeed, as Kal says. To see John’s attempt at exercising go to our youtube channel, www.youtube.com/boxingnewsonline.