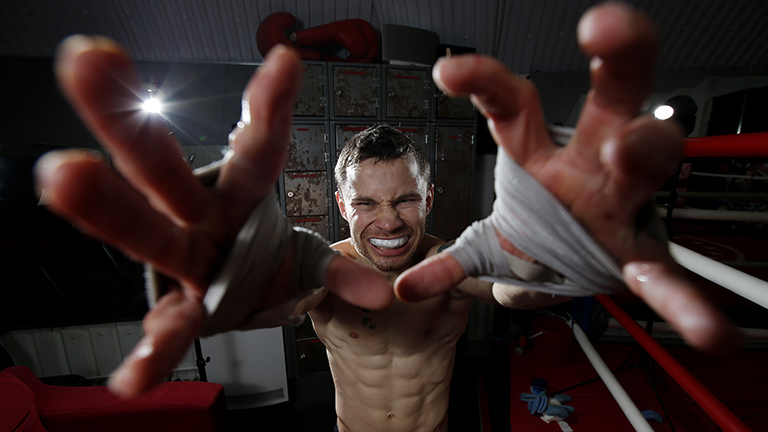 FOR the second time in his career a freak accident has forced Belfast’s Carl Frampton (26-2, 15 KOs) to call off a bout during fight week. In July 2017, Andres Gutierrez slipped in the shower and suffered cuts that forced him out of a contest against “The Jackal”. Last night it emerged that a large marble ornament in his hotel lobby was knocked over and landed on the 32-year-old’s left hand while he was sitting around enjoying a coffee, fracturing his fifth metacarpal.

The injury to his little finger means that his outing against Emmanuel Dominguez at Philadelphia’s Liacouras Centre had to be spiked. It was to be the first fight of a multi-fight deal with Top Rank, and an exercise in re-establishing him in America. Although it is a cliché that every fighter trots out the former two-weight world titlist had also stated that this was the best training camp of his career, one in which he corrected the things he was not happy with after reviewing his loss to IBF featherweight holder Josh Warrington in December.

Boxing News caught up with an understandably disappointed and subdued Jamie Moore, who reiterated Frampton’s claim that they had enjoyed perfect preparation for this one. “It was the best I’ve seen him in the gym,” said Moore as he went about packing his bags for the flight home.

“Obviously that gym form needs to be transferred into the ring on fight night,” he added. “The evidence from sparring was that he was boxing well: he was more disciplined, less keen to get into a fight and using his skills. Now all that work is gone. We’ve all been away from our families for a month, too. Carl knew what he had to do to fix things. He put them into practice. In this camp he was righting those wrongs. We just haven’t got the opportunity to put it into practice.

“This was to reintroduce him back to America. It was more about starting the new deal than the fight. We’ll let the dust settle then sit down and look at what is next. I can’t see him wanting any ticking over or marking time fights at this point in his career — he will want to come back to a big fight.”

The former WBA and IBF super-bantamweight and WBA world featherweight holder had mentioned the R-word, retirement, following the loss to Warrington only to decide to have another run at world level. The multi-fight deal with Top Rank and the opportunity to fight in American again had lit a fire under him, one that will be hard to maintain after this unlucky break at this late point in his career. Especially as there was talk of a possible contest against WBO holder Oscar Valdez in December.

“There can’t be a plan yet, we’ve just got to see how his hand heals up because they’ve said four to six weeks for the fracture to heal and then we’ll take it from there,” revealed Moore. “It would be hard to try to tick over with a broken hand without having a fight lined up again. It is heart-breaking and disheartening for Carl.

“The fact he was flying in training makes it even more sickening for him. What can we do? There is nothing that can be done now. Everyone was panicking and fearing the worst until we got the confirmation, but we had an idea what was going to happen [to the fight]. It has been a horrible, horrible experience. I wouldn’t wish this type of thing on anyone.

“The thing actually fell on the top of his hand, breaking a bone in his little finger, and part of the marble broke in the fall so that tells you it had some weight to it. It is mad. I still can’t believe it happened. First and foremost, he just wants to go home to his family and kids after being away from them.

“It is hard to think of positives. The only one I can think of is if it had hit him anywhere else instead of the hand it would have been a lot more serious than it is. The mood is that low at the minute it is hard to find positives, but we are trying.”

Moore is all about taking a positive outcome from any situation. It is a philosophy that he has put into practice over the year. This time, though, it is hard to process the events of the past few days.

“I think it is near on impossible to do that [find positives],” he said. “We just have to keep morale as high as we can, keep the motivation up to let him know it is going to be alright, which is just very difficult to do in a moment like this. This is hard, really hard. I am probably one of the most positive people you can come across, but I am struggling today.”