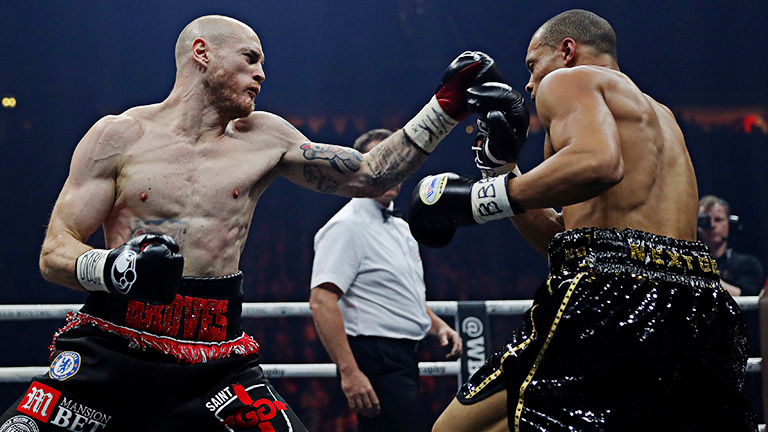 Joe Gallagher discusses George Groves vs Callum Smith with Jack Figg, and reveals, if they'd needed a replacement, he'd have preferred Golovkin to step in rather than Eubank Jnr

WITH the news George Groves will be in the final of the World Boxing Super Series to face Callum Smith, no one will be happier than the boxers, bar one man, Joe Gallagher.

Gallagher, trainer of Smith and his three brothers Paul, Liam and Stephen, told Boxing News of his joy when hearing Groves will be in the final, after recovering from a shoulder injury sustained in the final round of his semi-final triumph against Chris Eubank Jnr.

“I’m really pleased for Callum Smith, he entered this tournament because the best fighters were in it,” Gallagher said.

After victories over Erik Skoglund and surprise semi-final replacement, Dutch kickboxing world champion Nieky Holzken, the Liverpudlian has improved his record to 24-0.

But Smith’s determination to prove himself the best in the super-middleweight division rests on fighting George Groves. As it seemed like Eubank Jnr was becoming an increasingly likely contender to replace the injured Groves, it looked like Smith would have to wait yet again to test himself against the division leader.

“Obviously George Groves was in it and he’s got the world title,” Gallagher said. “Chris Eubank Jnr was in it and there were lots of good domestic fights to be made and Callum Smith’s aim was to come out as a world champion.

“When George injured his shoulder and there was talk of Chris Eubank in the final I felt sorry for Callum, it seemed like he was cursed.

“It’s alright beating Chris Eubank in the final but he would still have come out of it without a world title.

“Groves is recognised by everyone … as the number one in the world at that division so what a great opportunity for Callum Smith.

“Callum Smith’s got a huge opportunity to become the number one in the world after the final and I’m so happy for him.”

Fortunately for Smith, with the announcement Groves will be in the final, he will get his chance to prove himself as the best in the 168lbs division, something that wouldn’t have been the case if Eubank Jnr did fill in as a replacement.

If it would have felt like an anti-climax for Smith had he not met the winner of the other semi-final in the final, Gallagher can certainly confirm this, and he believes the public have got what they wanted too.

“I don’t think I have to say much – you just have to look at social media and what the take on it was when there was the suggestion of Chris Eubank becoming a replacement, it was resounding that nobody wanted him in it,” he said.

“He had been beaten compressively by George Groves, I think everyone made their feelings known, and when it was confirmed Callum would fight Groves it was met with a great response.

“I’ve seen people tagging the Sauerlands [promoters Kalle and Nisse] and the WBSS and saying ‘finally you’ve seen sense and it should be them in the final’.

“We came in this tournament to become a world champion and fight for the world title and I feel if it hadn’t been someone with a title in the final the tournament would have lost a lot of credibility.

“Especially if putting someone like Eubank in who had already been beaten comprehensively in the semi-final.”

Before it was confirmed Groves and his WBA world title would be present in the final, Gallagher revealed how important it was for Smith to fight for either a world championship or against a credible name, with the trainer even calling for Gennady Golovkin to move up eight pounds.

“I did say if it wasn’t going to be George Groves try and get another world champion, a [David] Benavidez, a Tyron Zeuge,” Joe said.

“At one point when the ‘Triple G’-Canelo fight fell apart I even said go and see if ‘GGG’ wants a place in the final. That’s how much we wanted a title on the line or a big name in the final.”

Smith booked his place in the final four months ago, and it seems he has been waiting on an opponent ever since.

This kind of inconvenience has led to a disruption in appropriate and detailed training, something Gallagher has actively dealt with up until the confirmation that Groves had recovered.

“It looks now like it will be end of August, early September a week or two either side. We’re there now and we can plan and concentrate on George.”

Concentrate Joe will and his preparations for Groves are slightly helped by the fact the trainer has been in this position before.

In 2011 Gallagher and Paul Smith stood across the ring from a 24 -ear-old Groves at the Wembley Arena in London.

That night Groves retained his Commonwealth and British super-middleweight titles with a second round stoppage of Smith, leaving Gallagher more than respectful of the challenge ahead while recognising lessons can be learnt from the defeat.

“You’ve got to take on board the things we did for that fight but obviously Paul and Callum are different styles, but one thing we will do is respect George Groves’ boxing ability and his punching power,” he said.

“Groves has always been familiar to us we’ve watched many of his fights, and so with Chris Eubank, it’s not someone like Nieky Holzken, on last minute who you know nothing about, we have someone we can plan and prepare for.”

A domestic feud for Groves is a familiar thing, just like with Eubank Jnr the Londoner had heated pre-fight build ups with James DeGale and Carl Froch, but despite his track record, Gallagher doesn’t see a the WBSS final going the same way.

“I think both kids are hugely respectful of each other, they both acknowledge how talented each other are and it’s a final which involves two talented fighters and two gentlemen who carry themselves correctly as well outside the ring as they do inside,” he said. “Groves himself is absolutely delighted to be in the final  and he wants to fight Callum Smith in the final, I think it’s great and we’re really looking forward to the fight.”

Groves showed mental strength in the final round of his encounter with Eubank Jnr, like he did to come back from three failed attempts at world title glory when he defeated Russian Fedor Chudinov on the fourth time of asking to capture his WBA strap.

This kind of attribute is something Gallagher recognises, but feels the public may not be aware of.

“I think a lot of people don’t give George enough credit for his mental toughness,” he said.

“The way he conducted himself in that last round [against Eubank Jnr] the way he man-managed himself and to be able to think on the spot and not complain to the referee, by doing that he would have brought pressure on himself.

“He’s had his jaw broken and come back in no time, he is a very mentally tough man and you need to, like Carl Froch did, nail George to the canvas to beat him because, George will keep coming.

“While George is in that ring in front of you he’s there to take you out and we are fully respectful of his achievements and what he brings to the fight and we need to work on the game plan to take care of that.”