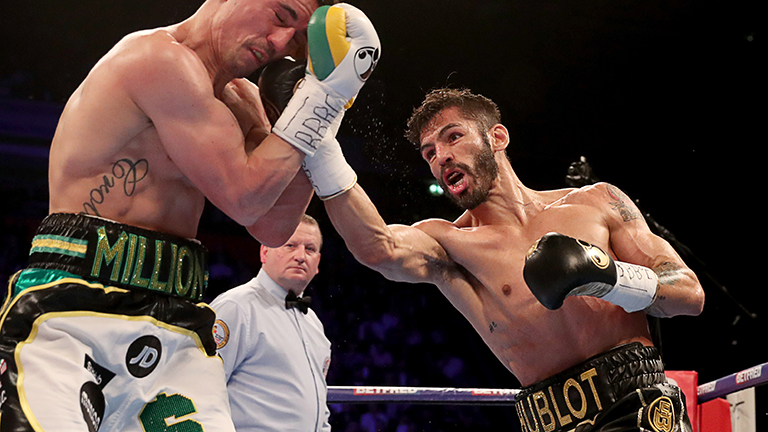 From narrowly avoiding the Westminster terror attack to being mesmerised by Jorge Linares, it was a rollercoaster week for Andy Clarke

LAST week wasn’t one I’ll forget in a hurry.

I do a lot of work on World Series Boxing and I’d been asked to host a British Lionhearts in the Community event at the House of Commons on Wednesday lunch time.

We were in the Thames Pavilion and it was a lot of fun. There were representatives from Sport England, UK Sport, the Mayor’s Office and, having just weighed in, both the Lionhearts and Italia Thunder teams, who were fighting at York Hall the following night, and their coaches came down too. Minister for Sport Tracey Crouch popped in and had the obligatory photos taken of her in some boxing gloves. It must be a strange life being a Minister, everything they do seems to be a photo-op.

We started with a few words from Charlotte Leslie MP, the chair of the All Party Parliamentary Group for Boxing, before getting into BLITC in a bit more depth (basically it’s a programme that takes boxing to London communities and engages young people with the sport) before finishing with a Q&A with Lionhearts boxers Mo Ali, Pat McCormack and Frazer Clarke who were all on fine form.

Everyone seemed to really enjoy it and our Italian guests in particular were busy taking photos of their unique surroundings. Once we’d finished Ian Paisley Jnr introduced himself and we had a chat about Northern Irish boxing and I then took my leave. It was just after half past two and after a few wrong turns I located the visitors’ exit and I was away.

A few minutes later the Lionhearts and Italia Thunder emerged from the exact same exit and found themselves staring into the wild eyes of Khalid Masood, who, brandishing a knife in each hand, attacked PC Keith Palmer and was then shot dead just yards in front of them. GB coach Tony Davis jumped over the barricade and was the first man on the scene to attend to the stricken police officer but tragically there was nothing he or anyone else could do.

I had no idea. I wandered off down Whitehall and didn’t see or hear a thing. My brother, who works at the House of Lords, sent me a text at a quarter past three and at that point I checked the news. I feel lucky. An acquaintance, not boxing related, suggested to me afterwards that I might have been disappointed at “missing the action” as he put it. I found that staggering; I mean, who the hell would want to see something like that?

I was early to York Hall the next day and one of the first people I saw was Tony Davis. Tony had been inundated with media requests and was dutifully responding to them all.

I was MCing so we went through what needed to be said and done with regard to the day before, rehearsed and then waited for the doors to open. The atmosphere was a little strange. It wasn’t sombre, it was upbeat; there was a kind of defiant energy in the air and it felt good, I have to say.

When the teams arrived I went in to see them like usual. I visited Italia Thunder’s dressing room first and coach Maurizio Stecca told me that when they’d woken up that morning they hadn’t wanted to box but that they’d discussed it further and decided they should. And they seemed OK, but as I’d barely met any of them before it was hard to tell where there were at mentally. I know the Lionhearts well and when I poked my head around their door the first person I encountered was coach Lee Pullen who, on finding himself confronted by a man in a bow tie brandishing a notebook and pen, promptly ordered a prawn cocktail. Yep, they were OK.

And it was a good night. The teams, and Tony in particular, got a great ovation when they were introduced and the scoreline of Lionhearts 5 Italia Thunder 0 was a bit misleading. Both Mo Ali and Frazer Clarke had to get off the floor to win and the visitors fought hard and well but the home team just had too much. Callum French made a very good debut and Pat McCormack, who looks huge at Welterweight already despite having only just moved up from 64kg, recorded another WSB win as did Bulgarian Radoslav Pantaleev at Light Heavy. Both teams handled an incredibly difficult 24 hours superbly.

The next day I was off to Manchester on Sky duty for the Linares vs Crolla bill. I got the train up with Ed Robinson and Anna Woolhouse, who are both very good company. Ed’s now senior producer at Sky Boxing and has a lot on his plate. But his responsibilities don’t end there; he’s also required, when out on the road, to catch Pokemon for his young son. He describes it as a fatherly duty but I think he enjoys it a bit more than he lets on.

I was covering the undercard so was at the weigh-in primarily to catch Sean McGoldrick, Ben Sheedy and Jason Welborn. Welborn’s managed by Matt Macklin now and Matt was filling me in on Michael Conlan’s extraordinary MSG debut the week before. He thinks his bantamweight will be as big a star as Conor McGregor, who walked him into the ring, in three years’ time.

By the time Crolla and Linares were due to take to the scales the temperature in the packed room was roasting. I was in the corridor outside chatting to Welborn when Linares came swaggering by in a flashly tracksuit and a big pair of aviators. I’ve been a fan of the Venezuelan for a long time, he’s a terrific fighter and just a bit of a rock star really.

On the day of the fight I was early to the arena and bumped into Jon Pegg, who had Brett Fidoe on the bill. Jon’s an incredibly active trainer and manager but he also finds the time to write and direct films. He’s done a few shorts already but, he was telling me, has just completed his first feature, The Quiet One. It’s a revenge thriller and he’s putting on a screening in Birmingham on April 23rd.

For the main show on Sky I was commentating on Ward vs Hughes and Morrison vs Welborn which both proved to be interesting fights. Tony Bellew was my co-commentator. He was great value and didn’t seem to mind when what looked like a new shirt got liberally sprinkled with blood from Marcus Morrison’s nose despite the fact that The Bomber thought the fight should have been stopped by that stage. Jason Welborn gave Morrison the most painful of nights in every possible way, I just hope he can recover mentally as well as physically.

Once I finished I had a ringside seat for the main event [pictured above] and Linares was mesmerising. It was as good a performance as I’ve ever seen from any fighter in a British ring. There was just nothing Anthony Crolla could do and so no room for any regret, censure or shame on his part. I don’t know if that makes a defeat easier to take or not but I would hope that it does, and I was glad to see him hear the final bell, he deserved it. Whether the bell has tolled on Anthony’s career for the final time or not we’ll have to wait and see. I suspect he’ll fancy one more but should that prove to have been his final outing then he really will have gone out at the very top because there are very few, if any, better fighters than Jorge Linares. As I left the venue I saw young Sale Cruiser Sam Hyde and as we wandered off we both agreed that Linares vs Mikey Garcia will be one hell of a fight.

In boxing it never takes you long to move on to the next one.