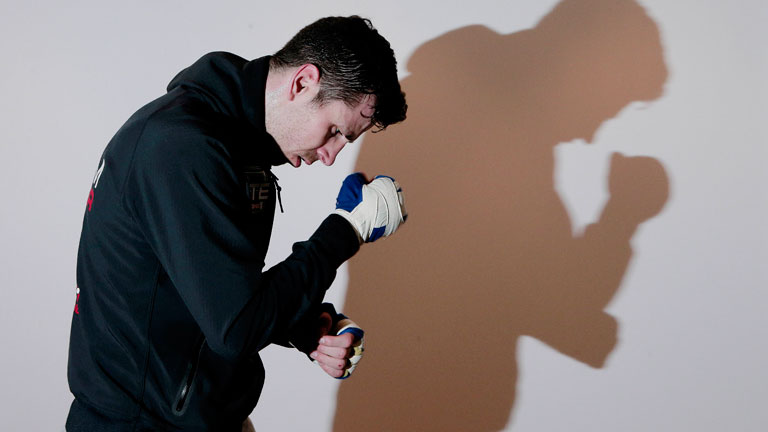 In his latest blog commentator Andy Clarke considers the mind of a fighter, and his own tortured imagination

I have a recurring dream about boxing.

I’m at a weigh-in for a fight I’m due to commentate on; a big fight, a top domestic fighter versus a name opponent from overseas, when at the very last minute the opponent pulls out.

It’s a disaster but then the promoter, sometimes Frank Warren, other times Eddie Hearn, once Frank Maloney, asks me if I fancy stepping in to save the card. I object at first saying that I’m not fit, I’m not the right weight and that I’m supposed to be commentating, but I always get talked into it.

The action then cuts to the day of the fight and I’m walking to the ring accompanied by Johnny Cash’s When the Man Comes Around, not sure why that song exactly but never mind. Then I’m in the ring, the bell goes and at that point I wake up.

So far I’ve agreed to take on Amir Khan, Kell Brook, Tony Bellew, when he was a light heavy, and David Price; a 2012 Price, the Price who was smashing everyone in sight. I’ve been strangely confident against all of them (probably because, apart from Bellew, they’re all lighter than me) except Price. Against him the bell goes and all of a sudden the ring becomes huge, a thick fog settles over it and I’m left just standing there for a bit before waking.

My latest adversary appeared last week and was Ted Cheeseman, the Matchroom super welterweight, and it played out as it usually does.

I had a different one just before Christmas where I was one half of a circus knife throwing act. My partner was Tyson Fury and he was the one throwing the knives. In that one I woke up just as I was being strapped to the rotating target with Tyson assuring me that, although he’d never done this before, it would be fine.

But there’s one thing I enjoy most and that’s listening to fighters talk about boxing. Or rather, listening to them talk to each other about it. They’re the only people who really know what it’s like to ply a pretty unique trade and the only time they can be sure they’re talking to someone who understands is when they’re in the company of a fellow member of the club. For me, being party to those conversations is gold, it’s like listening to double 0 agents comparing notes.

And I found myself in that situation last Saturday. I was covering Culcay vs Andrade with Jamie Moore and Darren Barker and in a break between fights I mentioned that Dennis Ceylan vs Isaac Lowe was coming up the next week. Darren asked where it was and I told him it was in Aarhus. He laughed and said that he’d spent two weeks in Aarhus as a young pro sparring Reda Zam Zam and that it’d had almost driven him insane because he was there on his own and there was nothing to do.

That prompted a discussion between him and Jamie about sparring trips. Jamie told about going over to Germany to work with Felix Sturm and how things had got a bit difficult when he’d put it on Sturm in their opening session, how they’d refused to believe he was a light middle. Darren recalled sparring Mikkel Kessler and said he was the best he’d been in with, him and Sergio Martinez, and that Kessler was without doubt a left handed orthodox fighter because his jab was so ramrod hard.

It was great just listening to it all but then we got to something even more interesting.

Darren and Jamie both basically had to retire on medical grounds; they could have kept going but their bodies and the experts were telling them not to so they didn’t. Darren asked Jamie if he missed it and after a pause he said that although there were things about it he did miss, on balance no he didn’t, because when the end came he’d grown tired of getting hit. Darren immediately agreed, he also didn’t miss it because if he was still fighting then he’d still be getting hit and he’d had enough of that.

Now, on the face of it, hearing two intelligent human beings say that they didn’t enjoy getting hit in the head, stomach and liver pretty much every day of their working lives shouldn’t be all that startling a revelation but somehow it was. Or maybe it was hearing them say it, so matter-of-factly and honestly that was surprising. It’s just so easy to assume that boxers accept getting punched as being part of their job, which of course it is, and that to them it’s not a big deal. But really, I realised, I’d just decided that on their behalf, and it’s pretty easy to decide that getting cracked on the jaw doesn’t hurt that much if it never actually happens to you.

I’d certainly never asked a professional boxer, if he, you know, ever got a bit cross and fed up at getting hit? And the reason I’d never asked was because I’d have been so sure of what would happen next. I’d have bet my house on finding myself fixed with a steely gaze, and then hearing any or all of the following statements; “you can’t swim without getting wet”, “It’s not a tickling contest”, “this is the hurt business”, and that I’d have left the conversation feeling a bit naïve and foolish.

But I’d have been wrong and I should have known better because one of the most engaging things about fighters is how human they are. They’re flesh and blood. They can all be hurt; they all know it and we all see it and they’re happy to admit it because they have nothing to prove.

And they definitely can’t be bothered to try and bullshit each other about it; they’ve been in there, they know what it’s like.

So if you can engineer it, listening to boxers talking to each other about boxing, without any cameras or audience, I think is as close to it as most of us will ever get.