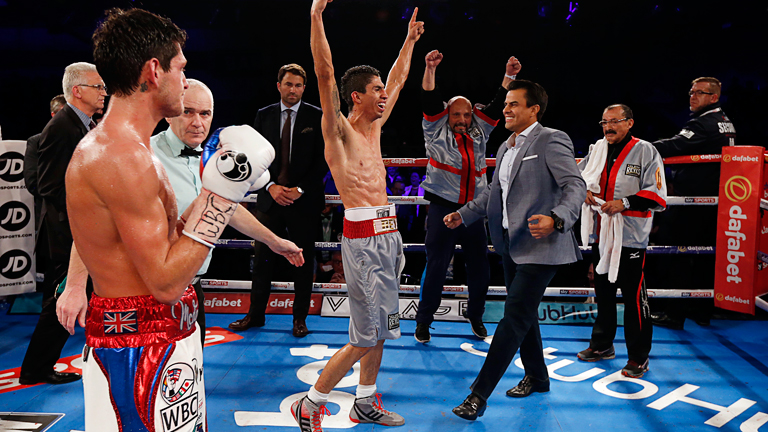 AN ice rink in Hull in bleak mid-winter’s a far cry from the state of Mexico but Rey Vargas made it home for the night and claimed the vacant WBC super-bantamweight title on Saturday thanks to an impressive performance against Gavin McDonnell.

Vargas was terrific but my first impressions of him, at the open workout three days before the fight, were underwhelming. I’d watched the 26-year-old on YouTube and could barely believe it was the same person. He was painfully thin and as he stood at the side of the ring in Hull’s Princes Quay shopping centre sporting a pair of Clark Kent style specs, he looked the least like a fighter of any fighter I’d ever seen.

One thing I’d been suspicious about was his height. The stats put him at 5ft 7.5in but he looked taller. It’s hard to tell for sure though because unless you go down the unusual route of actually asking to measure a person then you need a point of reference. I know how tall I am so I thought I might as well use myself and wandered over to shake his hand, doing so for as long as I could whilst standing as close to him as I could before the whole scenario threatened to push the boundaries of socially acceptable behaviour too far. He was only a bit shorter than me so once the very thick soled trainers he was wearing were taken into account I reckoned 5ft 9in, which is taller than Gavin McDonnell.

Always in the background in the Vargas camp was legendary trainer Nacho Beristain. The Hall of Famer kept a low profile but did reveal that $70m dollars had been put on the table for Juan Manuel Marquez to meet Manny Pacquiao in China in September. Who knows whether that will happen or not but like most things in boxing, you can’t rule it out.

The demeanour of the Mexican crew didn’t change all week; they were confident and the mere presence of someone like Beristain served to authenticate that confidence.

The pressure and the spotlight was much more on Gavin McDonnell and he handled it well. You could see the nerves grow as fight night got closer and almost smell the adrenaline coming off him at the weigh-in but I never think there’s anything wrong with that. Both fighters made weight comfortably. I really thought Vargas had looked dead at the weight when I first saw him but when he stepped up on the scales he looked better than he had two days previously, and that is not what is supposed to happen. It was an ominous sign and I couldn’t help but wonder if Clark Kent was slowly turning into Superman.

McDonnell’s trainer Dave Coldwell joined us for dinner after the weigh-in and there wasn’t much discussion of the fight at all. Dave was very relaxed, the kind of relaxed a trainer can be when he knows camp has gone well and that his man is ready. He also turned me off diet Coke for life after telling me, when I ordered one, that it’s got something called Aspartame in it. Google it if you’ve never heard of it, I hadn’t.

And McDonnell was ready, his performance showed that, but in Rey Vargas he ran into a man who, whilst not quite the Caped Crusader, showed himself to be an extremely good boxer, the kind of fighter who’s so at home in the ring it doesn’t matter where you put it; Hull, Mexico City or California, it’s still the same squared circle.

But he’ll have left the North of England having had the toughest test of his career and McDonnell should harbour no regret about the outcome because he could not have done any more or tried any harder. It’s an unpalatable fact of life that sometimes you give it everything you’ve got and it’s still not quite enough. But there’s no shame in that, how can there be?