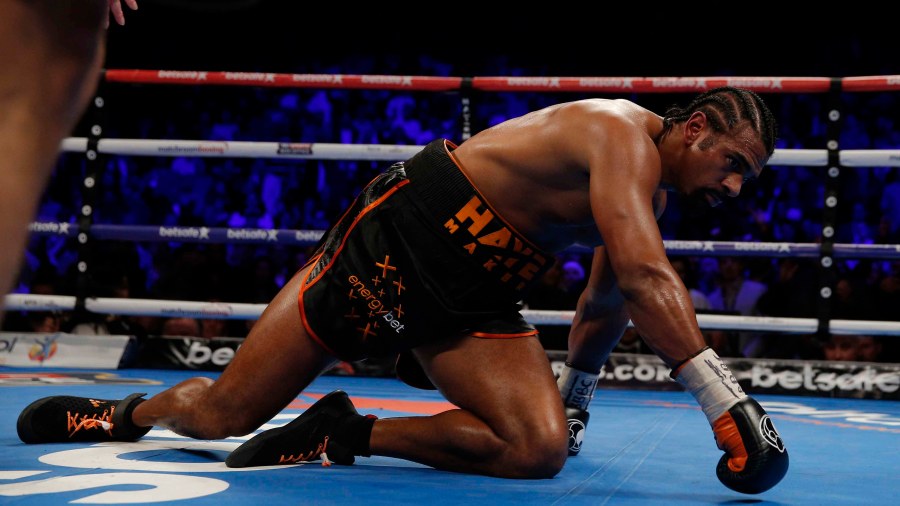 I think it’s fair to say that David Haye vs Tony Bellew delivered something none of us could have predicted.

I trotted along to the press conference on Thursday and weigh in on Friday. I was commentating on the first half of the bill so the two main men were of no great concern to me; I was more interested in Jack Sellars, Jake Bonalie and Craig Glover who were all happy to talk. Lee Selby’s fight was also one of mine and I had a good chat with Jamie Sanigar about what would be next for the IBF featherweight champion. The picture’s still unclear but the news that Carl Frampton’s been slotted in at number three in the IBF rankings was greeted with enthusiasm.

I got to the 02 at about midday on the day of the fight which is ridiculously early but I just like to skulk around, sit on all sides of the ring, look in the dressing rooms before the fighters have arrived and then make the walk to the ring to see how the arena looks from there. It’s mad really but it’s what I always do.

When the action started I was working with Darren Barker who is probably the most happily retired sportsman I’ve ever met. He’s got a new gym opening in Aldgate soon which is keeping him busy.

The fights we had were good with 28 year old debutant Bonalie springing a surprise against Glover in our Facebook contest which went on before the PPV coverage started. Once it did start we kicked off with Ted Cheeseman vs Sellars. When I met Sellars at the weigh in I feared for him; he looked very fresh-faced by comparison to Cheeseman but proved to be incredibly tough, somehow getting up after being laid out early on by a thunderous right hand to lose 78-74.

Selby looked classy against Gago and forced a late stoppage. I was glad to see referee Bob Williams jump in because the corner obviously wasn’t going to. I think Williams is a really good referee; he lets fighters fight but as soon as he feels the contest is no longer competitive he stops it and I’m all for that.

At that point I’d finished so did my best to stay right up at ringside but then Anthony Joshua arrived and I had to move a little further back. I didn’t have much choice, I was sitting in his seat.

The main event was fascinating. The most poignant moment for me came before the start of the eighth or ninth I think when Bellew seemed to plead with the opposition corner to pull their man out, who by that stage had been fighting on one leg for quite some time.

When we went off air it was my job to extricate Carl Froch from ringside and get over to the Intercontinental for a post-fight Q&A. It took a while and I found myself having a chat with Danny Cipriani who told me that he was convinced Haye had ruptured his Achilles tendon. How you fight on with that kind of injury I really don’t know. In other sports it’s critical for athletes to differentiate between mere pain, which they’re required to tolerate almost constantly, and actual physical injury, which could shorten their career. If it’s the latter then they will stop, it’s the prudent thing to do, but not boxers; the thought just doesn’t enter their heads.

On the way over to the hotel Carl said that what had happened in the ring that night was the perfect illustration of why he himself should not, would not and could not make a comeback. You just cannot, he said, have the amount of time out of the ring that David had had, at that age and hope to rival, let alone eclipse your previous achievements, it’s just not possible.

The two former champions are friends, going way back to their international amateur days almost a couple of decades ago but when we got on stage Froch was typically frank. The Hayemaker was, he said, generous to a fault, spending on other people in a way that, whilst admirable, was frankly unsustainable and his lavish lifestyle meant that he’d ended up having to return to the ring for financial reasons which, as history shows, rarely ends well.

Other boxing matters were discussed and it was a fun way to end the night. People have this idea, and I know where it comes from, that Carl Froch is a man who takes the role of being Carl Froch extremely seriously but he doesn’t, not in my experience.

As I left I bumped into Adam Smith and on reflection one of the abiding memories of the night for both of us was the bravery Haye showed in those long painful rounds when defeat was inevitable. Throughout the entire build-up I’d never once thought that would be the scenario that would emerge, it just didn’t seem possible but the last year for Tony Bellew has been an impossible dream all of its own. He’s signed on the dotted line for Creed II apparently but real life is proving more fascinating that any Hollywood fiction for the Bomber these days; never mind Creed 2, Sylvester Stallone should snap up the rights to Bellew I.