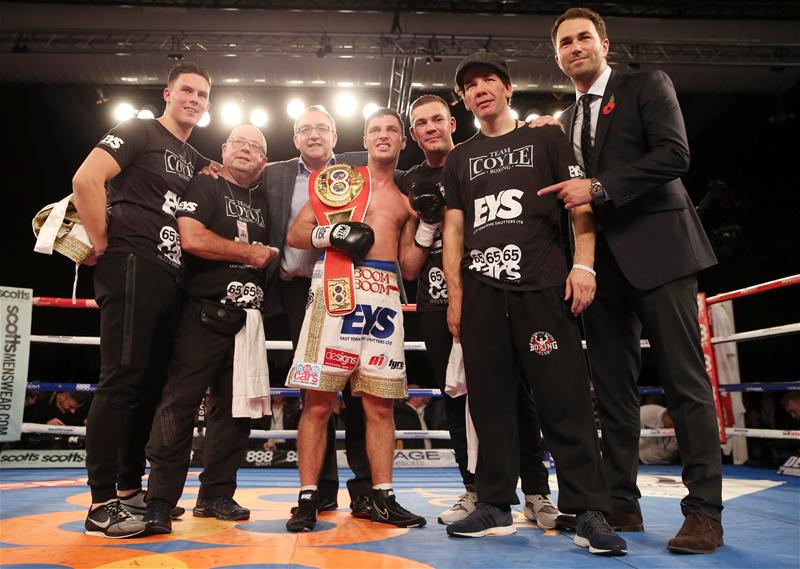 Top fighter-turned-trainer Jamie Moore outlines how he has made one subtle but significant change to each of his three charges - Tommy Coyle, Matthew Macklin and Stephen Foster Jnr

ONE of his main flaws was the one that caused him to lose against Derry Mathews [l rsf 10, last July]. As a reaction, he pulls his head back and drops his hands, to try and get out of the way of a shot. He’s still not 100 per cent ironed out yet but he’s getting there. Him reacting so quickly to a shot coming is a good thing – I want the reaction speed to be the same, but I want him to react in a different way. So I try to trigger his reaction by throwing a shot at him when he’s on the pads and now he’s in the mould of pulling his hands up nice and tight. Every now and again, when he’s sparring, he’ll still do the old trick, and I’ll shout, ‘Don’t pull back, keep your hands up.’

Then he’ll go back into what he’s been doing to correct it. It’s a painstaking job and it’s frustrating for him because he’s getting to the point now where as soon as he does it he knows he’s done it. That’s the first step towards fixing it, because if he doesn’t know what he’s doing wrong, he’ll never fix it; I can only instruct it. It’s constant repetition. For something to become second nature, you’ve got to do it until you get bored with it. He’s keeping me in good shape, because I’m constantly throwing left and right hands at him, catching him and getting him to react.

Another thing was moving his head. It was like something blowing in the wind, he was moving that much. I just tried to explain to him, to get out of the way of a shot, you can just move your head six eight inches. He picks it up because he’s so enthusiastic. He’s practised at home in the mirror.

MATTHEW MACKLIN
Closing the distance and using the jab

MATT’S not going to get any better, physically or in his skill-set as a boxer, he’s a world-class fighter anyway. My job has been to make him aware of what he does well and some of the stuff he used to do well that he’s neglected recently. It’s a much different job than the one I do with Tommy, where I’m moulding him.

Matt’s got a great jab for instance and he’s neglected it recently. We’ve done a lot of padwork, a lot of technique sessions, just me and him in the ring. Then, obviously we try to replicate the kid we’re fighting with the sparring partners. We had [6ft 4ins unbeaten super-middle] Hosea Burton over in Marbella [where Macklin’s gym is situated], who was bigger and a lot more awkward than the kid Matt was actually fighting [Lamar Russ].

I like to concentrate a lot on footwork as well. You can’t get your shots off at all unless your feet are in the right position. With Lamar Russ being a lot taller and rangier, there was more emphasis on closing the distance down when getting the jab off. A lot of the emphasis on the jab was to double and triple it up because you might not land with the first one, but if you keep your momentum going forward and you target both body and head – because he might lean back but his body’s still there – you can still land. So the first jab can be a dummy jab to spark a reaction, then you follow up either upstairs or down. We did a lot of drills doing that and working on fast feet. On the pads, I’d replicate Russ. So I’d be backing off as Matt was moving in, encouraging him to cover that distance quicker, and if he was falling short with his jab he’d realise he wasn’t covering enough distance.

I WANT him to go back to his boxing; he was a double ABA champion but he’s got such a powerful left hook, he tended to rely on that and his fitness. We need to get him going back to what he was doing years ago because he’s a lovely boxer.

I’ve had him doing lots of stuff off the back foot and I’ve really overemphasised it. He’ll never be a total counter-punching box-mover, but I thought if I took him to the other extreme – the opposite of a pressuring, come-forward fighter – he’ll land somewhere in between and that’s where he’ll be at his best.

So I’ve had him doing lots of pad drills on he back foot. I walk forward and close the distance down. I want him to use angles more. As a pressure-fighter you go in phases: you attack, then you go again, and maybe even a third phase. But I’ve been doing the opposite with Steve, getting him to go backwards in phases. So, stick a jab out, take a half-step back then, as someone comes in, hold your ground and counter them on the way in. I’ve been doing the opposite with Steve to what I’ve been doing with Macklin; I’ve been playing the pressure-fighter and trying to get him to walk me onto shots.