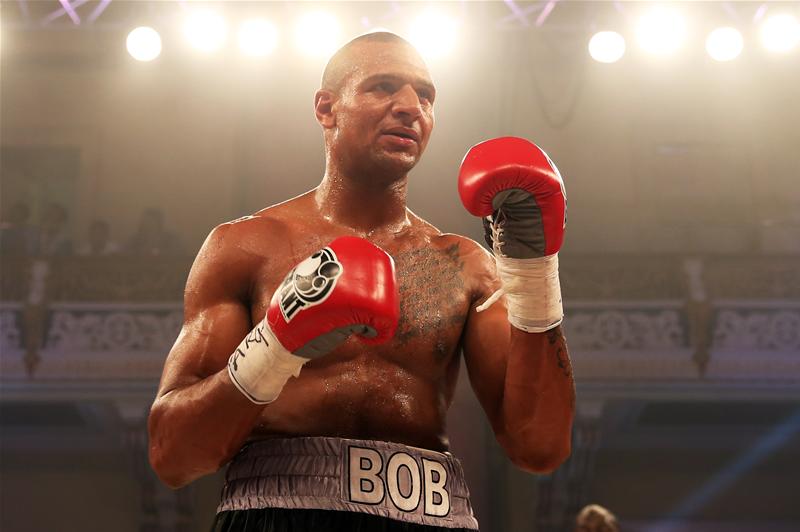 BOB joined us after his fight with Ovill McKenzie in 2009 [Ajisafe was dropped heavily in the opening session, only to eke out an eight-round decision]. He has an awkward style, not the most pleasing, a southpaw who can look all arms and legs. People had tried to change him completely around but he was 24 by then so we just tried to iron out the things that didn’t particularly work.

What he used to do and sometimes still does even now is throw the jab then step back, bring his right foot back, in line with his left, so he’s square on, before moving his left foot back. We’ve worked on keeping his distance right, by keeping him doing footwork drills on the lines we have painted on our gym floor, watching him moving along them, especially backwards. We also do a drill we call ‘combination blows’, where the fighter moves back and forwards in a straight line and hits the heavy bag with various combinations. You stand over the fighters and remind them on that drill to move the front foot forwards first when going forward, the back foot backwards first when moving back. That way you’re never square-on. Bob’s done a lot of that too.

There was a bit of convincing with Bob to do body sparring when he’d only ever done open sparring. When he first came here, I said, ‘Have you ever done body sparring?’ He said no, and the first time he did it, all the other fighters beat him up. Later on, he said, ‘My body’s in bits.’ But you have to be prepared for good bodypunchers, how to defend against them and body sparring fills in the gaps before you start the open sparring phase; we still teach them to keep their hands up, even in body sparring. If you imagine a top-level boxer fights 36 rounds per year plus they spar three times a week for 12 weeks in their training camp – 12 rounds per spar – that’s 36 sparring sessions or 432 rounds on top of potentially 36 from fighting, that’s a lot of damage to the head. You can’t build up resistance around the head, you can only improve the reflexes to avoid head shots. I also told him body sparring helps to condition his body, because a good body shot – one that drops a fighter – nine out of 10 times it finishes them, where often you see boxers getting up to win after being decked with a head shot.

One challenge was getting him to stick to a plan in a fight and not just improvising all the way through. He was a whirling dervish and did not always realise what he was doing. Before, he would throw a hundred shots and land five, but we wanted him to throw five and land five. I explained to Bob that fighting is not just about going toe-to-toe or scoring more shots than your opponent. You can’t throw sand at something and hope it hits, you throw stones and make sure they hit. Against Tony Bellew [a competitive points defeat], we planned to take away his power shots and keep frustrating him by popping him with the jab, not letting his feet get set. The stuff you teach on the pads and practise in sparring, that’s where all the tactical work is done, not the one minute you get in between rounds. Once you’ve got a habit in training, it becomes second nature, instinct. It’s all about looking at your opponent’s strengths, nullifying them and then working to the best of your own ability. Don’t work to your opponent’s strengths. Floyd Mayweather never fights his opponent’s fight, he makes them fight his.

Bob was already a good runner but we had to introduce him to strength work. He hadn’t done a lot of that and in the gym at first, the smaller kids would be able to physically push him around. We worked on leg strength and his rear chain. Lifting weights actually helped improve his punching power, it doesn’t for everyone, like for Kell Brook it only made him stronger in the clinches and so on. We did some deadlifting, a lot of rowing movements – including bent-over rows – for his back, a lot of shoulder work. Compound movements rather than isolated, and, as we were coming closer to fights, we’d do more ballistic stuff – fast movement of weights. With the way he was making weight, a lot of times he felt drained going into fights. A lot of people associate eating clean with not having chocolate or ice cream, but you’ve got to restrict calories at some point if you’re making weight. Probably guys like Bob think, ‘I’ve trained hard, eaten well, but I’m hungry so I’ll just eat something else and burn it off with a run tomorrow.’ Until they associate calorie expenditure with calorie intake, it’s an issue. I sat down and explained all this to him and gave him a basic meal plan to work to, then we monitored his weight. Boxers might think they need to eat more if they feel weak. But you’re going to feel weak sometimes if you’re training hard. Then, you can either train less or sleep more, but there has to be a balance.