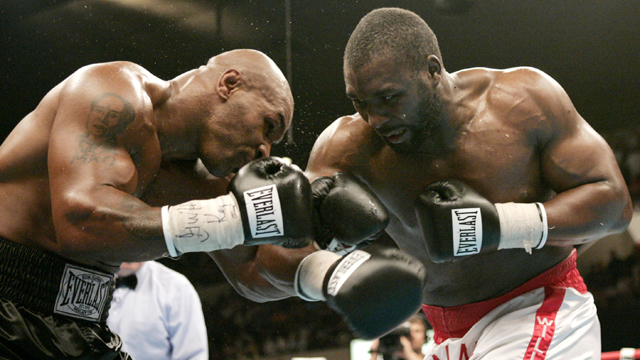 Danny Williams explains how he beat a man whom he thought was invincible, Mike Tyson

MIKE TYSON was old at the time and I’m pretty embarrassed that I beat such a great fighter. It’s crazy. I always say to people that if he’d have been the best Tyson, I wouldn’t have lasted a round. Like everyone else I thought he was invincible back then. I remember there was a time when we didn’t even see him have a nosebleed. It was amazing. I thought he was made out of metal. But it started to go wrong for him: the money; the wrong people around him; too many girls; too much partying. There’s so many different factors. If he’d have gone on properly, with his old people around him, he could have beaten Rocky Marciano’s [49-0] unbeaten record and gone down in history as the greatest, but with all the people around him, it went wrong.

I’m not being disrespectful but Mike Tyson is not the most handsome-looking man, and with all that money, women he would only [previously] dream of having coming to him came to him. What was he going to do?

The key was to jab. But when I got into the fight I couldn’t get him with a jab because his head movement was so good. It was the second or third round when I just thought, ‘Forget it, I’m going to war with you.’ You see at that point I go to war with him.

His punching is crazy. I can’t even explain it. It’s the speed as well and the sharpness. You don’t even see the punches coming.

In the fourth round we had a little trade-up and he hit me with a massive right hand, absolutely massive, and when that had no effect, and I held on, and then started to push him back, I felt him get weaker. The crowd were chanting his name and they could feel him get weaker too. They could feel the fight coming out of him. About 30 seconds later I put the big barrage of punches on him.

He was the type of fighter who was great when he was winning but he could never come back from the brink – like Evander Holyfield – and win. With Tyson, if he was winning he’d won, but if he was losing he’d lose. It’s sad to say but that attitude was in him.

Me and [trainer] Jimmy [McDonnell] stayed up all night [after the win] talking, talking, talking. I don’t think I slept – I was just buzzing. The phone didn’t stop ringing. It was the most amazing feeling I’ve ever had.