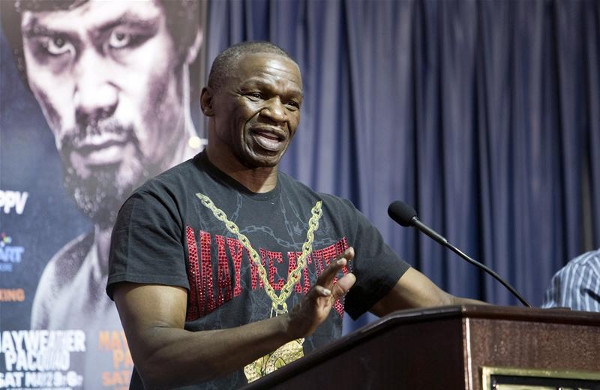 Floyd's trainer is adamant Mayweather is worth every cent he earns, writes John Dennen

YOU never know quite what you’re going to get from Floyd Mayweather Senior. He responded to the media today (April 30) with short, almost stern answers, at once dampening down the suggestion that Manny Pacquiao will provide a great challenge for his son, Floyd “Money” Mayweather, whom he trains. “I don’t think it’s going to be much of a fight,” he said frankly and to confirm his confidence added, “The fight is already won.”

He expects Floyd to halt Pacquiao on Saturday, suggesting that the Filipino is vulnerable after the knockout he suffered against Juan Manuel Marquez. “Once you get hit like that and you’re ass goes to sleep, it’s not going to take too many more of them. It’s going to happen again,” Mayweather warned.

But even Mayweather Snr had to be impressed by the scale of this event, the kind of money it’s generating and the fortune tickets cost. “I’ve never seen anything like this before. I think the numbers are so high because nobody’s seen anything like this before,” he said. “I think my son worked very, very hard for many years, I think he’s getting the millions because he’s doing his job and he’s doing his job very well.”

He said nothing to allay Pacquiao’s team’s concerns about Mayweather’s gloves, which yesterday hadn’t yet arrived with the Nevada commission for inspection.

Mayweather Jnr is contracted with Showtime for two more fights, Pacquiao on Saturday then one more in September. After that his father thinks Mayweather should retire. “If you stick around, somebody’s going to get you,” he said.

With a final spoken poem, Mayweather Senior left the stage.