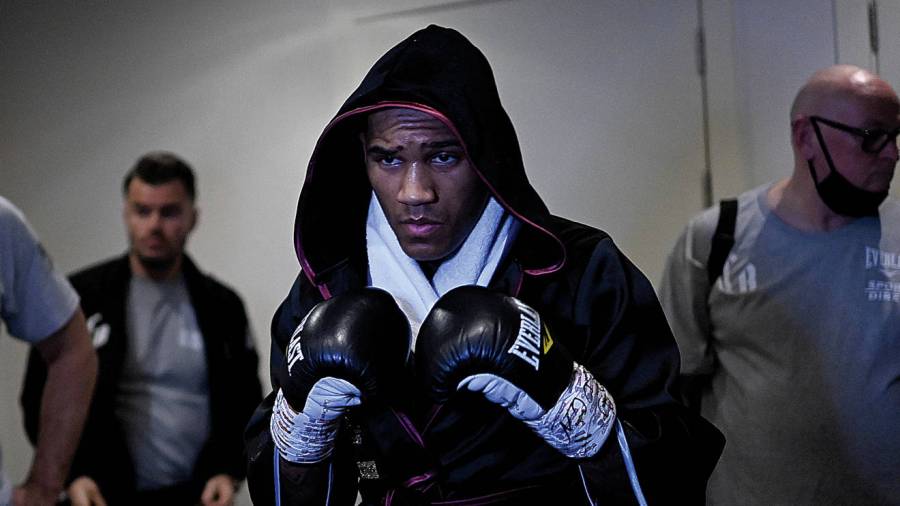 Conor Benn knows next year could change his life. He spoke to John Dennen

IF it were up to Conor Benn he would be going straight into a fight with Yordenis Ugás, the Cuban who ushered the great Manny Pacquiao into retirement in August and holds the WBA’s welterweight belt.

“I would,” says Benn when asked about the No.3-ranked welterweight. “But he has got a mandatory [or a belt unification with Errol Spence]. He’s got to fight first. Otherwise I would. I would say to my team, listen I’ve defended my WBA [intercontinental] title six times now let’s get on to Gilberto [Mendoza] at the WBA and get the fight made. But he’s got his fight, then we can go from there. I don’t want to wait around. So preferably have a warm up fight.”

That next fight could be against Adrien Broner. The wayward American star has taken a fair few losses to big name opponents but picked up a 12-round points win earlier this year and is open to working with Benn’s promoter Eddie Hearn. “I believe Eddie’s making the Adrien Broner fight for March, April, so I just leave that to my team,” Conor told Boxing News. “I’m not bothered, I leave that to my team. I just get in there and fight. But that’s what I heard he’s making.”

But he warned, “I plan on making that fight look like the sort of fight it’s supposed to be.”

After finishing Chris Algieri with a chilling knockout in the fourth round of their contest in Liverpool on December 11, Benn is not optimistic a mooted fight with Amir Khan will happen. “Money talks at the end of the day. I don’t think Khan’s going to take the fight, not after Saturday night that’s for sure. [Kell] Brook maybe. But who knows? I’ve probably got more chance of fighting Jake Paul,” Conor laughed. “Probably more likely to happen than Amir Khan taking the fight.”

Benn had a successful year in 2021, knocking out Samuel Vargas in a round, beating Adrián Granados at Headingley and topping it off with the Algieri victory. But 2022 could be even better for him. He should be able to move his career on to another new level. “It’s going to come round so quick,” he thinks. “The next six months is going to change my life, change our lives.

“It isn’t even stardom that I’m talking about, I’m talking about just getting that world title. With it comes the stardom, I’m only concerned about our plan to get the world title. I’ll fight anyone tomorrow. So I just want to sit down with my team and have a chat about what the next six months consists of. Because at the end of the day I listen to my team and my team’s guidance,” he continued. “I’ve got the best team in Britain, facts. All you’ve got to do is look at my career.

“I’ve got the best team in Britain all round.”

Benn has been well built. To some that is a criticism, but he’s got the right fights, improved rapidly as a boxer and developed his profile along with that. “We understand the full value as a team of marketing, PR and commercial deals,” he said. “You’ve got to maximise your potential earnings outside the ring.

“We understand the power of marketing.

“People don’t get it and it’s so important. You’ve got to have the complete package all round. Thankfully I can be myself. Thankfully I can just be who I am, I’m a fighter, a character,” he explained. “[Without that] you rely purely on fighting to make your money, which I don’t think is always a good thing because you’re never promised a tomorrow in the game of boxing.”

Conor is the son of British legend Nigel Benn, he is an appealing commercial proposition. But there is an authenticity about him too. He fights with an emotion that his supporters connect to. “Most of the things I do is based on emotion. So I fight with passion, I’m passionate about what I do, it’s raw celebration. What you guys see it’s raw, it’s real, it’s genuine,” the 25-year-old says. “I’m just passionate about what I do, I love what I do, I work extremely hard so although it never comes as a surprise to me that I got the knockout, it’s just passion.

“I was a little bit disappointed because it didn’t go through to the second half. So again there’s going to be unanswered questions,” he continued. “I would have liked for him to take me into deep waters to be honest.

“It would have been nice to knock him out late, in rounds nine, 10, but still get some solid rounds in. But you don’t get paid for overtime, do you?”

Expect to see Benn filling more arenas in 2022. He promises to thrive off it. “I’ve done this 20 times now, I’ve fought in front of 20,00 people on numerous occasions so it sort of just becomes normal, which is good, having those big fights early in my career in front of thousands puts you in good stead,” he said.

From the callow novice who made his debut in front of a full O2, he’s developed into a star, and now a contender.