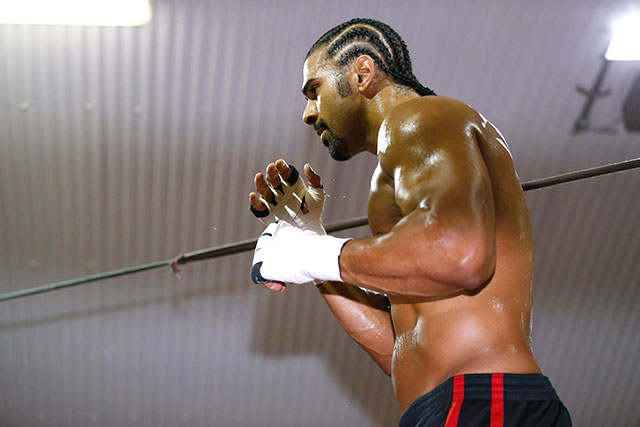 According to Boxing News readers, Haye now comes behind both Tyson Fury and Anthony Joshua in the domestic pecking order

DAVID HAYE has been plotting a comeback for a while but we have seen little evidence that one will occur. At the weekend – after a year tending to injuries – the 34-year-old declared “2015 would be the year of the Hayemaker”.

Haye last fought in the summer of 2012 when he knocked out Dereck Chisora in five rounds. Since then injury cancelled two dates with Tyson Fury, and threw his career into chaos. Before all that, of course, Haye wandered merrily into retirement armed with an overflowing bank balance following his loss to Wladimir Klitschko in 2011.

A little over three years later, and allegedly driven by glory and not money, Haye wants a rematch with Klitschko but accepts he has fallen down the pecking order.

He may have fallen further than he thought. These days, Haye is no longer thought of as the best in his country, let alone one of the leaders of the boxing world.

The results of our online survey to name Britain’s top heavyweight placed him in third place, behind that man Fury, and new kid on the block, Anthony Joshua.

However, those standings could change if the former cruiserweight champion returns impressively.

Some have questioned Haye’s commitment due to the amount of time this latest comeback has been in the planning stage. In an interview with The Independent, the injury prone Londoner explained the delay should enhance his longevity.

“The shoulder is fixed, for me that was the most important thing,” he said of the problem that ruined the Fury showdown. “I didn’t want to rush an announcement [on his comeback], have a set back, and have to have another six months out.

“I’m starting from the bottom you know, I’m not even in the rankings, I’ve been out for over a year, so my plan is to get back in there fast, work my way up the rankings.

“I don’t think he [Klitschko] will give me a voluntary defence, I think it will have to be a mandatory situation, which is not a problem for me… Physically I’m in a good place and I know that everything will fall into place nicely.”

Haye did not outline plans to work his way to No.1 spot in the rankings but plotting a route without Fury or Joshua could be time consuming, and not nearly as exciting or lucrative. If Haye is serious about ruling the world again, he could do far worse than become the king of his country first. A win over Fury, or Joshua, would be huge for the “Hayemaker” and make believers out those doubting the validity of his comeback.

David Haye: I can beat anyone on the planet