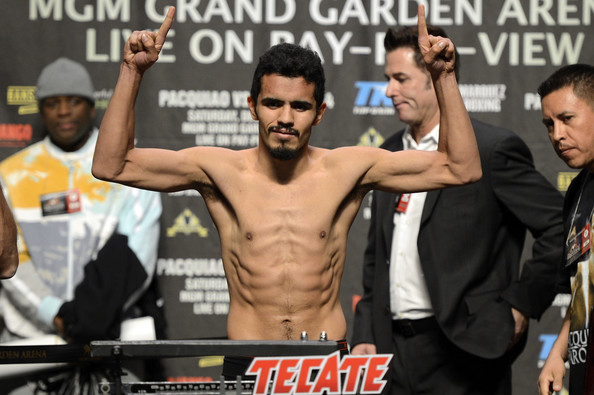 Bey is confident but he'll have a tough time with Vazquez, writes Matt Christie

APPEARANCES can be deceptive, particularly in the world of boxing. One case in point is IBF lightweight champion Miguel Vazquez, a delicate-looking creature who defends his title tonight against Mickey Bey at the MGM Grand in Las Vegas in support to Floyd Mayweather-Marcos Maidana.

Vazquez was the only fighter to attend the undercard press conference in a suit, and the threads buried him. The Mexican has been a prominent figure in the lightweight division since he upset then-unbeaten Breidiss Prescott over 10 rounds in 2009, and then outscored Ji-Hoon Kim to win the IBF title the following year.

The 27-year-old has since defended his belt six times, and scored two non-title wins since, making him one of the most consistent champions in boxing. Yesterday, he set foot on the scales, looking almost emaciated, at 135lbs. It was 13 pounds lighter than his weight when he lost to Saul ‘Canelo’ Alvarez in 2008 – his most recent defeat – and four pounds shy of his mass while being outscored by Timothy Bradley the year before.

This morning, with his fight with Bey – a member of Mayweather’s The Money Team – just hours away, Vazquez quietly walked around the labyrinthine MGM Grand.

“I am ready and well prepared,” he said. “Bey is a tough opponent but I’m ready to win. This is important to me and my family. I fight for my family in Mexico.”

Bey will have his work cut out. The 31-year-old hit the headlines in 2013 when abnormally high levels of testosterone demanded a suspension, and later that year, was stopped in the final round by John Molina Jnr while leading on the scorecards. A former amateur standout, Bey is confident that, after 10 years as a professional, he can now rule the world.

“If I fight the way I’ve been looking in the gym, then Miguel Vazquez won’t have a chance against me,” Bey said.  “Honestly, I think I’m better than him at everything. He’s a smart, good fighter, but he can’t match anything that I can do. He has experience, but none of his wins have been impressive. I have more speed, power and defence.”

Bey’s confidence is understandable; despite Vasquez’s efficiency, he rarely dazzles in victory. He does everything well, and nothing spectacularly. The flashier American challenger has undoubtedly studied Vazquez and thought the same.

Vazquez, though, has proved time and again that it is dangerous to judge a book by its cover.