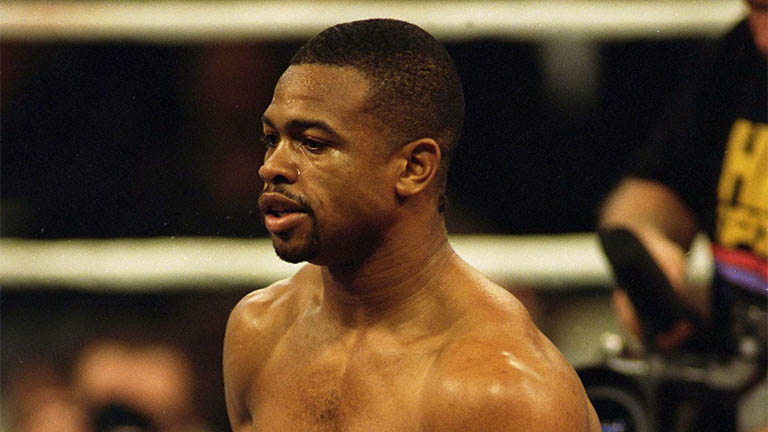 IT remains the greatest win ever by a British fighter. Sugar Ray Robinson arrived in London in 1951 with a 13-man entourage that infamously included his personal hairdresser, a voice coach and a dwarf named Arabian Knight. He also boasted a record of 128 wins against one defeat and the title of boxing’s pound-for-pound best.

The term pound-for-pound was invented for Robinson. It was a way of conveying that – no matter who the heavyweight champion was – Sugar Ray practised the sweet science better than anybody else. Few gave his British opponent, Randy Turpin, any chance.

Turpin began fighting in fairground booths, then battled up the amateur and professional ranks, all the way to this unlikely middleweight world title shot. He grabbed it with both hands. The 23-year-old, an early user of weightlifting in his training regime, outfought Robinson over 15 rounds to pull off that remarkable upset in Earl’s Court.

“He was the better man, it’s that simple,” said Robinson afterwards. He also blamed a seven-week, six-stop European tour was for his loss. Robinson was favourite for the rematch, held in front of 61,370 in New York’s Polo Grounds. Yet Turpin fought his exalted foe on even terms up to the 10th round, when a badly cut Robinson sought – and got – a desperation knockout to reclaim his crown.

After this famous pair of fights, a long wait ensued before the next British boxer took on a man widely recognised as the reigning pound-for-pound No 1. Four British boxers lost to Muhammad Ali, but the term has generally been preserved for lighter-weight boxers below the traditional glamour division.

In 1980, Dave “Boy” Green faced his own great Sugar Ray, this time unbeaten welterweight Leonard. Green proved game until a brutal combination left him flat on his back in the fourth round. Yet many observers believed that a lightweight Roberto Duran, who’d go on to fight Leonard, was the planet’s top boxer at the time of Green’s fight.

As a counterpoint, in 1986, Britain’s Lloyd Honeyghan also challenged an American welterweight touted by many as the pound-for-pound No 1. Undefeated Donald “The Cobra” Curry had a fearsome reputation but Jamaica-born, London brought-up Honeyghan was unfased.

“I can’t wait to start punching Curry on the head. I’m going to smash his face in,” came his unsubtle pre-fight prediction. ‘The Ragamuffin Man’ delivered on his words, pasting a weight-drained Curry into retiring on his stool after six rounds.

To this day, it ranks second only to Turpin’s win over Robinson as the greatest single victory pulled off by a British fighter. Pedants, however, could point out that Curry was vying for the unofficial pound-for-pound top spot with Marvelous Marvin Hagler.

By 1993, it got simpler as the pound-for-pound debate was to be settled in the ring. Julio Cesar Chavez owned that remarkable 87-0 record as he stepped up to fight masterful US welterweight Pernell Whitaker.

The majority draw result remains one of the most infamous decisions in boxing history, but at least one question was resolved. Whitaker, despite being robbed by the judges, was clearly the planet’s best boxer – and in 1995 he faced the unlikely challenge of Scotland’s Gary Jacobs. Jacobs was gutsy and incredibly fit but already had lost five fights to opponents inferior to ‘Sweet Pea’. On paper, it looked like David versus Goliath. Except Goliath had the sling.

The underdog kept it competitive and was even credited with an 11th-round knockdown after Whitaker slipped over. Yet that just seemed to anger the champions who pummelled Jacobs to the canvas twice in a torrid last round. The final bell saved him from a stoppage but not from a unanimous points defeat.

By the late 1990s, boxers and promoters were becoming aware how valuable the pound-for-pound label was. It may have been an honorary title but with the alphabet world titles fractured and discredited, this mythical crown had gone from being a barroom debate to a serious talking point.

Influential outlets, including Boxing News, began running pound-for-pound top 10s alongside traditional weight rankings. In 2000, Sugar Shane Mosley was installed atop many of these lists, particularly in the US, after he leapt from lightweight to welterweight to score his first win over Oscar De La Hoya.

A year later, Mosley took on Bristol-born, American-based Adrian Stone. A curious match-up that played out as expected as the tough, awkward but limited Stone was crushed by three knockdowns in eight minutes.

Mosley suffered his surprise defeat to Vernon Forest in his next fight and the consensus title of the world’s best fighter fell to a man whose ardent admirers believed it had belonged to for some time. At his peak, Roy Jones Jr boasted reflexes and athleticism unmatched in the sport’s history. By 2002, the former middleweight and super-middleweight champion was killing time at light-heavyweight, irritating his critics by soundly defeating overmatched foes.

One of those was Sheffield’s Clinton Woods, whose record before fighting Jones was less a “who’s who” of the 175lb division and more of a “who’s that?”. The fight was stopped after six one-sided rounds, Jones waving the referee in to intervene with one fist, while lining up punches with the other.

Woods was honest later on: “It was a bit of a fairytale, but I wasn’t ready for Roy Jones.”

The good news for Woods, of course, was that the fairytale ending was still to come. He would go on to have a fine career after the Jones shellacking, winning a version of the light-heavyweight title and successfully defending it four times.

Next came Ricky Hatton. Manchester’s hugely popular ‘Hitman’ is the only British fighter to challenge two pound-for-pound No 1s at their peak. In 2007, he faced Floyd Mayweather, who embraced and utilised the pound-for-pound tag beyond anybody before him to become a bigger draw than any heavyweight of his era.

In the build-up, Hatton scored plenty of verbal jabs. In the ring, he was less successful. Mayweather played matador to Hatton’s bull, sending him headfirst into a ring post before finishing the fight in the 10th round.

One of Mayweather’s abbreviated retirements followed and his great rival succeeded him as boxing’s top dog. Manny Pacquiao met an ill-prepared Hatton in May 2009, the end result being that chilling second-round knockout which left the ‘Hitman’ unconscious on the canvas.

The decade since has seen an explosion in British boxing success. Yet it wasn’t until April this year that a home fighter post-Hatton challenged a boxer widely viewed as the pound-for-pound best in the world, as Anthony Crolla bravely attempted to stand up to Lomachenko’s mesmerising assault in LA, before being sent face-first to the canvas in the fourth round.

An all-too-recent reminder of what Luke Campbell faces on Saturday. Both fighters may own Olympic gold medals, but the 31-year-old Lomachenko is arguably the greatest amateur the sport has ever seen and boasts footwork and a ring IQ that no sparring partner can replicate.

If Campbell can pull off the upset in London, he’ll become the first British boxer since Turpin to dethrone the pound-for-pound king in his own country. His task looks even trickier, given that Lomachenko isn’t fighting off the back of a six-bout European tour and appears fully focused on the task in hand. Perhaps if a full-time hairdresser is spotted in Lomachenko’s entourage at the weigh-in, Campbell might allow himself to dream.

Alex Reid was boxing writer for <em>Sport</em>, the UK’s most widely read sports magazine, from 2009 to 2017. He has also written about sport for the <em>Guardian</em>, <em>FourFourTwo</em>, BTSport.com and TalkSport.com. He was one half of the never-missed Boxing Clever podcast.