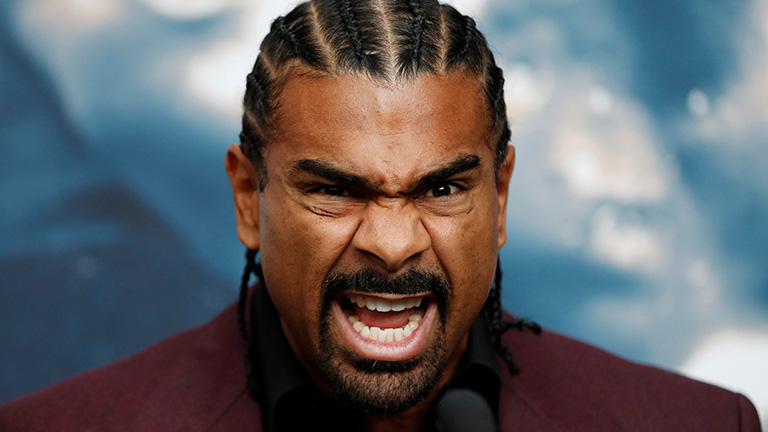 David Haye and Tony Bellew will fight each other again on May 5 at The O2, writes Andy Sims

DAVID HAYE has adopted a new humble attitude to his latest pre-fight build-up – but opponent Tony Bellew is not taken in.

Haye, who suffered an Achilles injury in losing to Bellew last March and then had to postpone their December rematch, again through injury, will take on his old foe on May 5 at The O2.

The build-up to their last bout was marred by unsavoury outburts and vicious insults from Haye, so this time the 37-year-old insists he is taking a more Zen-like approach.

Yet Liverpudlian Bellew, 35, simply told Londoner Haye he should turn into a Buddhist monk.

“I boxed horrendously in the first fight, because Tony forced me to box badly,” said Haye at an entertaining press conference by Westminster Bridge.

“Tony Bellew bettered me. That’s it. What would have hurt the most was if I didn’t have the chance to right the wrong.

“Did he get under my skin? He probably did. It didn’t work last time, all that anger and hostility, whipping myself up. He beat me.

“So I am controlling the controllables. I’m trying not to focus my energy on animosity but on positivity. All of my losses have been when I’m angry.

“You humbled me, you beat me, and the towel came flying in because you were the better man.”

Bellew was quick to remind Haye of some of his comments ahead of their previous fight, and was unconvinced by this apparent change of mindset.

“Am I not the crappest world champion this time?” he said.

“Last time it was all ‘Tony Bellew will be asleep viciously inside two rounds’. Now all of a sudden it’s this humble approach. I don’t understand this flip around.

“I don’t need you to take the bait, you are the same as you were last time. You’ll rip your top off and look fantastic again, and your mindset will never change. You know you can’t stand the sight of me.”

That prompted Haye to respond: “I love you Tony Bellew, I’ve got a crush on you.”

The love-in briefly continued as Bellew admitted: “I’ve always said you are beautiful… but I’m still going to punch you.”

Bellew added: “I hope you don’t become a Buddhist before the fight – I am worried you might crack out the holy prayers.

“You’re saying ‘you beat me and humbled me’ – that’s rubbish. On May 5 you are finished!”