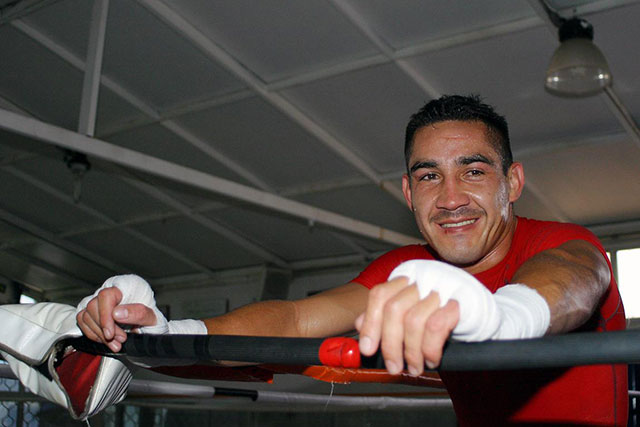 THE fight many insiders are predicting will be the fight of the night on Saturday’s MGM Grand show is the light-welterweight clash between Humberto Soto and fellow thrill-seeker, John Molina.

Soto, 34, is a former super-feather and lightweight champion hoping to become a triple weight king. Unbeaten since a 2012 loss to Lucas Matthysse, the Mexican could secure a world title shot if he wins this 10-rounder.

Grinning from ear to ear, and making an effort to share eye contact with each of the journalists in attendance, he took to the stage with a nervousness that belied his significant achievements.

“You guys are going to be the winners on Saturday night,” he told reporters, “because this is going to be a great fight. Molina is a true professional and I respect him, and his team, but in the ring we are enemies. I will win. Make sure you are watching.”

Molina is delighted to be fighting Soto, a man he calls an idol.

“Let me tell you a short story,” Molina said. “I was just a guy fighting four and six round fights and one night I was on Humberto Soto’s undercard. I was sat in the car and I saw him walk by. I was like, ‘Wow. That’s Humberto Soto.’ But it’s my time now.”

In his most recent bout Molina also lost to Matthysse. It was a barnburner but Molina contributed to his own downfall in that bout, swinging wildly and inviting punishment.

“I’m ready and you will see me utilise some new tools,” he continued. “We have been working on some new things. I’m going to jump all over this fight.”