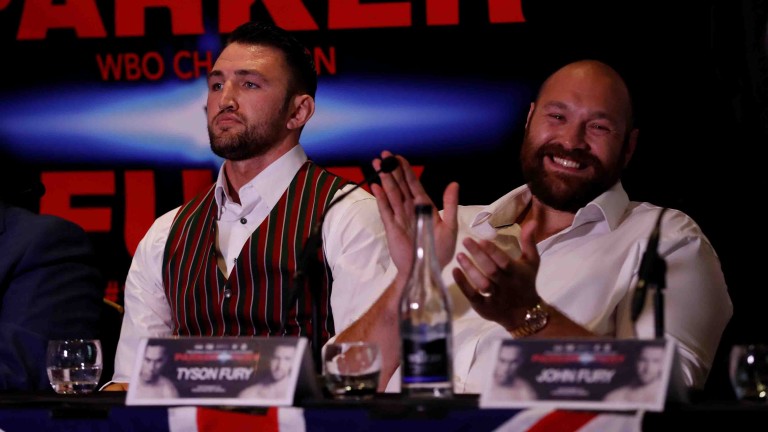 As Tyson Fury and Deontay Wilder delay a natural rematch, Hughie Fury, Tyson's cousin, offers his services for a 2019 fight with Wilder

IN the same week we were told Tyson Fury’s rematch with Deontay Wilder is unlikely to happen before March or April next year, another Fury has offered his services to ‘The Bronze Bomber’ should the American have difficulty sourcing opponents for the remainder of 2019.

Hughie Fury, Tyson’s cousin, boxes the unknown Canadian Chris Norrad this Saturday (May 25) but is seasoned beyond his years and, according to his father, to take on the world’s best once his next assignment is out of the way.

High on the list of future opponents is Wilder, the current WBC world heavyweight champion last seen blitzing mandatory challenger Dominic Breazeale inside a round. That’s a fight Peter Fury believes is a good one for his son and, should Wilder struggle nailing down opponents for autumn and winter, one the Fury family would be more than happy to take.

“If he’s looking for an opponent this year, Hughie will step up and fight him, no problem,” Peter told Boxing News this week.

“You can print this now: If Wilder needs an opponent because he can’t get whoever they’re trying to get, Hughie will step in and fight him this year. It’s an easy fight to make. Hughie would fight him in a heartbeat.

“Hughie is not avoiding anyone. He will take on all the top contenders. If Wilder is looking for an opponent, that’s a fight Hughie would take 100%.”

Ever the realist, Peter Fury is a great believer in his son’s abilities but cognisant all the same of Wilder’s power and Hughie’s underdog status in any potential fight between the two.

He knows there is plenty for Hughie to work on and knows that defeats to Joseph Parker and Kubrat Pulev need to be seen, on reflection, as learning experiences rather than as being indicative of Hughie’s ceiling in the sport. If this proves to be the case, fights against the likes of Wilder won’t be beyond his reach.

“Hughie would be an underdog, but I think he’s on the verge of doing special things and I don’t talk lightly,” Peter said. “Let’s get Saturday out the way, then get a good opponent for July or September, and if Wilder wants that fight towards the end of the year, or even in September, we would look at it.”

Certainly, Hughie Fury’s style is a world away from that of Dominic Breazeale, the American shut down by a Wilder right hand in Brooklyn on Saturday. Where Breazeale was slow and static and upright, Fury would be on the move, skittish and unconventional. He would, in a sense, share more in common with Tyson, the cousin with whom he has often trained, than any of the other opponents Wilder has so far encountered in his reign as WBC champion.

Tyson, of course, is the only man not to have been knocked out by Wilder.

“I know Wilder has got extreme power in both hands and is a hell of a puncher,” said Fury, “but Breazeale was tailor-made for him. He came in, his head didn’t move, and he let him tee off.

“Taking Wilder’s shots and saying ‘that’s not hurting me’ means nothing. You’re still there taking them. That’s why it ended in one round. I don’t think it was so much a case of how spectacular Wilder is. It had more to do with how poorly Breazeale went about it. He was basically walking into the road and stepping in front of a truck. He got clipped and that was the end of it.

“What I will say about Breazeale is he has a very good chin and did well to get up from the knockout shot. He took a thunderous right hand and managed to get up from it. He deserves a lot of credit for that. But there wasn’t a lot of thought process in his game plan.”

Hughie Fury’s game plan, meanwhile, is all about thought and probably needs to be.

At 24, Hughie, 21-2 (11), is unusually young for a heavyweight contender, never mind one who has already boxed for a version of the world heavyweight title, and it remains tough to strike a balance between capitalising on opportunities and still giving him time to improve and grow. That, frankly, has been the problem from day one, back when Fury turned pro as a wide-eyed 18-year-old and found himself trying to learn in the shadows as Tyson, his larger-than-life cheerleader, did all he could to put the Fury name up in lights. Knowing when to stick or twist is tricky when time is on your side.

Moreover, the question of when to pull the trigger remains a big one for Fury in the ring, too. When he lets go, he impresses, as proven against Sam Sexton in 2018. But it’s when he hesitates, or when there is too much of a thought process, as was the case against both Parker and Pulev, that we’re left with an image of Fury not so much being overwhelmed by an opponent as being overwhelmed by his own mind.

Against Wilder, however, being mindful is probably the only way to get the job done.