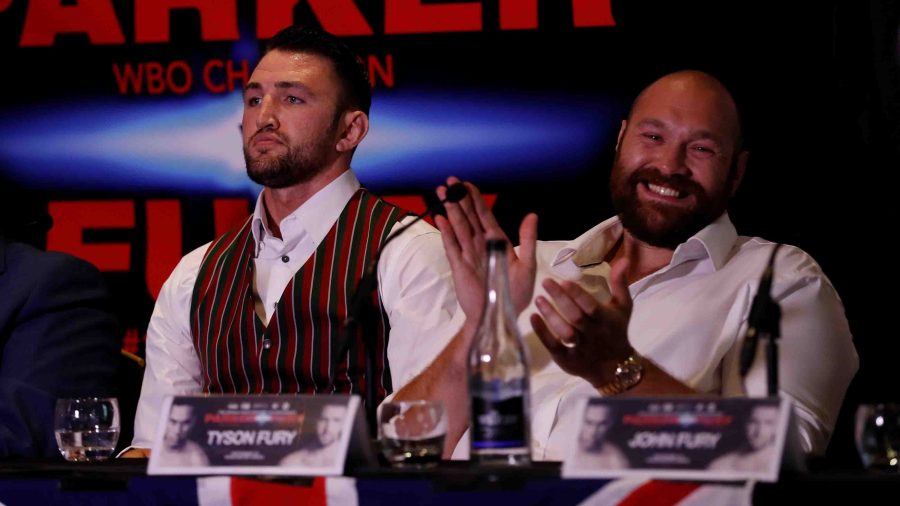 HUGHIE FURY had barely left his teenage years behind him when he witnessed his cousin Tyson Fury shock the boxing world with his points victory over Wladimir Klitschko in Dusseldorf two years ago.

The younger Fury pumped his fist and dragged his cousin to the ring floor when he heard Michael Buffer say those three familiar words, ‘and the new,’ in one of boxing’s biggest upsets.

However, the weight of the three-piece heavyweight crown became too much for the fan-favourite “Gypsy King” as he revealed a more intense and concerning battle with boxing’s invisible fighter – depression.

After Tyson was forced to scatter the belts, one of them landed on the other side of the world when Joseph Parker beat Andy Ruiz for the WBO title in New Zealand last December.

The unbeaten Kiwi, who has 18 knockouts in 23 fights, will fly the WBO belt back to England for a fight in Manchester on September 23, where Tyson’s 22-year-old relative Hughie aims to recreate Fury family history.

“That was a quality night and I’m going to make sure we create another memory,” he exclusively told Boxing News.

“It was the best feeling ever when Tyson lifted those belts and we heard the words from Michael Buffer. I’ll never forget it. But now I have a chance to experience that again. I can’t wait to lift that belt up. It will be a spectacular night for the family when I do.”

The fight was originally scheduled for May 6 but Fury sustained a back injury after he pushed himself too hard in the gym. It was an injury so painful that on some days, he couldn’t even move and even though Fury offered to fight through it, the doctors said otherwise.

“It turns out I pulled a disc in my lower back,” said the unbeaten challenger who has won half of his 20 bouts inside the distance.

“I was in pain and the physio said not to fight. I was willing to fight with it but it got so bad that it became hard to move. Everything happens for a reason and I’m glad I listened to the doctors because now I have the fight on my home turf.“

The Furies are a proud fighting family and don’t have time for or appreciate excuses when it comes to business in the ring, as you will have seen when Tyson tried to fight David Haye twice. With this in mind, Fury says he wants to follow the example of a proven world-level fighter.

“I want to own the heavyweight division eventually,” he said. “I didn’t want to go in there half-hearted and half-hurt so I had an excuse if I lost. I’m not that type of character. I want to show I’m the best on the night by being in the best shape and that will get me the win.”

As for his opponent, Parker is a wild swinging 25-year-old, whose father was named after the great American Jack Dempsey. His come-forward style has earned him 12 stoppages inside three rounds but Fury believes his fighting technique will play into his hands.

“Joe Parker is fast, aggressive and has a good combination of punches but I have an answer for everything he’s going to throw,” he said.

“I’m so confident in my own ability that I believe there is nothing other than victory on the cards for me on September 23. The only way he is going to win is he will have to nail me to the canvas and knock me out and that’s the only chance he has of beating me. But I’m telling you, that WBO belt is mine.”

While they have been in England, Parker, his trainer Kevin Barry and his promoters Duco Promotions thought they would make the most of their air miles by paying a visit to Eddie Hearn to entertain the possibility of fighting Anthony Joshua, who holds the other two pieces (the WBA and IBF titles) to Tyson Fury’s former prize.

But Hughie took great offence to this, more so from Hearn’s side, as he labelled the Matchroom promoter “a cockroach2 at his press conference in Manchester’s Radisson Blu hotel.

Joshua shouted ‘Tyson Fury, where you at?’ after his stunning 11th round stoppage of Klitschko at Wembley Stadium on April 29 leading people to talk about a potential fight between the two Brits next year, albeit if Tyson is licenced to fight.

When asked if he would step aside for his older 28-year-old cousin to fight Joshua, Hughie Fury stated the goal in his fighting family is not an individual success story.

“I don’t care who gets Joshua first,” he said.

“If Eddie Hearn and that stiff idiot have overlooked me, they’ve made a big mistake. Me and my cousin are going to unify the full division together. There’s no losers in our family and we’ll be taking all the heavyweight titles back for sure. The worst mistake you’ll ever make is to underestimate a Fury.”