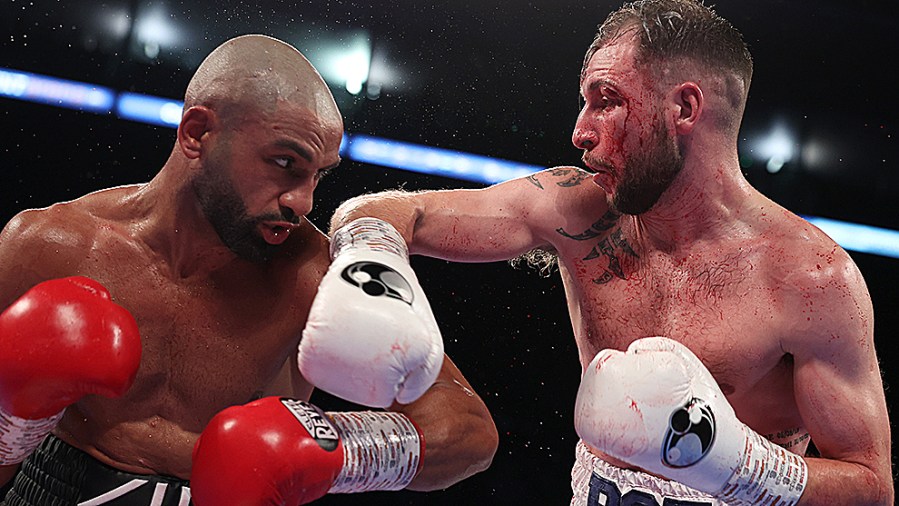 LIKE the majority of the initially noisy but increasingly quiet spectators at the Nottingham Arena, I hoped that the lightweight 12-rounder between Rossington’s Maxi Hughes and Sheffield’s Kid Galahad might at some point catch fire but it never showed any real sign of doing so.

There was a feeling beforehand that this meeting of counter punchers might not exactly be an epic and so it proved, the blue touch paper never being lit.

Returning from that shock loss to Kiko Martinez down at featherweight last time out, Galahad had the better of it behind the jab early doors, moving onto the offensive and scoring with both uppercuts and rights through the middle. But it wasn’t particularly tidy and he was admonished on more than one occasion for treading on Maxi’s foot, prompting a switch to southpaw a little more often than was probably planned.

It wasn’t until the middle rounds that Hughes began to land his left with regularity and, with Galahad not following his jab with anything significant, Maxi was able to make up that early lost ground, his hooks upstairs proving the more eye-catching. With something of a spring in his step he was edging more of the nip and tuck sessions which followed.

Cards at the finish read 116-111 (Marco Morales), 114-113 (Giulio Piras) and 114-114 (Terry O’Connor), gave Hughes, who was cut above the left eye in the penultimate session, a majority decision victory. Had it not been for the fact that the increasingly frustrated referee Marcus McDonnell had docked Galahad a point in the 10th for use of the head, Maxi would’ve retained by virtue of a split decision draw.

Having stepped up through the divisions a fine performance from Denaby Main’s Terri Harper at super-welterweight saw her rip the WBA belt from outclassed Scot Hannah Rankin.

This time last year the crowd’s favourite Terri was still down at super-featherweight but anyone who doubted the wisdom of her moving up to chase honours in a higher weight category was left eating their words as she took control from the very beginning. Her movement was good, there was more snap to her punches and she was increasingly enjoying herself.

Not so Hannah, who in against the ultra confident Yorkshire girl wasn’t helped when as early as the second she sustained a nasty diagonal cut above the left eye, the result of a punch according to Watford referee Bob Williams.

Scores of 98-92 (twice) and a slightly closer one reading 97-93 confirmed what all those in attendance already knew.

For 10 long rounds Warley heavy Solomon Dacres threw everything but the kitchen sink at Argentinean Ariel Esteban Bracamonte but the visitor simply refused to budge. Three scores of 99-90 at the finish proved evidence of the one-sided nature of the contest.

Dacres had a point deducted in the ninth for a low blow by referee Kevin Parker and though he was unable to get rid of a particularly tough and durable opponent he will have learned hugely from the experience.

A scheduled 10 at welter between Newcastle’s Cyrus Pattinson and 33 year-old Frenchman Jorick Luisetto made it just a little further than the half way stage before, with 119 seconds of the sixth gone, referee Bob Williams decided enough was enough.

Trailing by the proverbial country mile and cut high on the scalp, Luisetto looked increasingly forlorn. In the sixth, a glancing shot knocked him over backwards not and though allowed to continue, a further fusillade from Pattinson on the resumption sent him over sideways as Mr Williams this time stepped in.

Seemingly on course for banking six good rounds against an opponent boasting a record the same as his own, Rotherham’s Junaid Bostan showed just what he was capable of as the clock ran down in the last. Off the leash, he stepped it up and duly battered Brussels operator Anas Isarti, referee Kevin Parker intervening and saving the Belgian with just 22 seconds remaining.

Newark referee Mr Parker halted another one when bearded Buenos Aires cruiser Marcos Karalitzky, too frequently guilty of holding and always second best against Gravesend’s Cheavon Clarke, was stopped with 39 seconds of the fourth still to run.

In trouble in the corner twice previously Karalitzky’s night was almost over and a huge right to the head was all the reason Parker needed to step in.

Rhiannon picked up a little damage to the right eyebrow late in the second but it didn’t worsen and she went on to rock the lady from Budapest with a pair of heavy lefts in the fifth.

THE VERDICT: The loss of main attraction Leigh Wood in the weeks prior to the show was a major blow