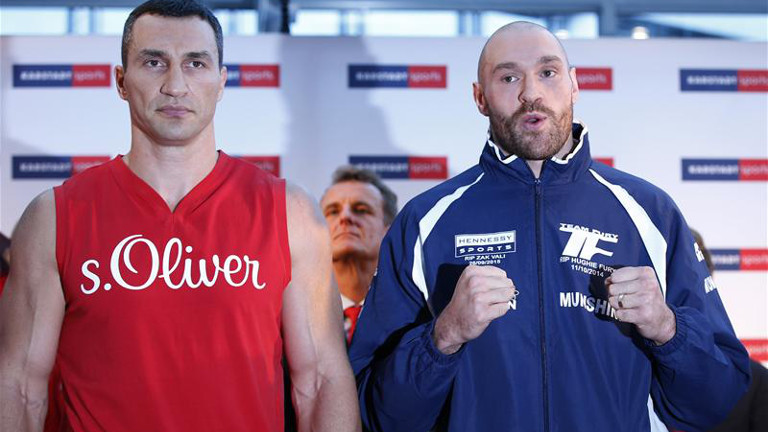 TYSON FURY (24-0) and Wladimir Klitschko (64-3) finally clash this weekend in Dusseldorf’s Esprit Arena in one of the most anticipated heavyweight title fights in recent years.

The warring pair were supposed to go toe-to-toe in the squared circle earlier this year before a calf injury felled the WBA, WBO and IBF king, forcing him to withdraw.

The super-fight is attracting worldwide attention much to do with the antics of colourful character, Tyson Fury after tussling with The Joker dressed as Batman midway through a press conference, singing his own rendition of Bette Midler songs and complimenting his forthcoming foe on his perfume when they went head-to-head earlier this week.

Aside from all of the crazy capers and continuing controversy over gloves, this fight promises the excitement that the heavyweight division has been lacking for some time.

Fury’s stature, awkward style and tenacity could present the dominant, long-reigning champion a few problems that other challengers have failed to bring.

Unbeaten British heavyweight boxer, Nick Webb (3-0), is favouring the dominance and experience of Doctor Steelhammer over the youth and size of the Gypsy King.

‘Wild’ Webb has finished all three of his opponents within the first two minutes of competition and has quickly raced to 16th position in the British rankings, hot on the heels of world title challenger, Fury.

The 28-year-old from Chertsey explained to Boxing News why he thinks the man from Kiev has got this:

“I’m really looking forward to this heavyweight clash and so is the rest of the world it seems by the media coverage and attention it is attracting. That’s probably got a lot to do with Tyson and his antics out of the ring, he is crazy!

“It will be great to see Klitschko have to deal with someone that’s taller, bigger and who is also an awkward customer.

“However, the fact that Fury was dropped by Steve Cunningham, who was only a cruiserweight, raises doubts over his chin, for me.

“Also, Fury has been largely inactive recently and I do feel for him having experienced a series of cancellations and postponements from David Haye, Dereck Chisora, and even Klitschko added to that pain when he picked up an injury causing their initial date to be scrapped.

“On that point, the remarkable athlete that is Wladimir Klitschko does seem to picking up more injuries more often. I believe that, although he is a marvel of a man, he is now beginning to age as he nears his 40th birthday.

“Back to Fury and it is an obvious comparison to make that he has not fought the quality of world class fighters that his upcoming opponent has, who hasn’t lost for 11 years and this bout will provide him with his 20th consecutive world title fight.

“His best chance is to use his size advantage which should prevent the Ukrainian from bullying him and controlling the fight like he usually does. Also, his awkwardness could help to frustrate the champion which could open up the chance to land some combos.

“However, I’ve got the reigning champion winning on points and I predict a knockdown at some point but Fury is stubborn, he’s a born fighter and a knockdown will just make him come back fighting.

“I won’t write Fury off, I definitely give him that outside shot and I sincerely want him to bring those belts back home more than anyone, but Wlad is the champion for a reason – he’s clever, professional, steely, and he carries the greater experience and skill than his challenger.”