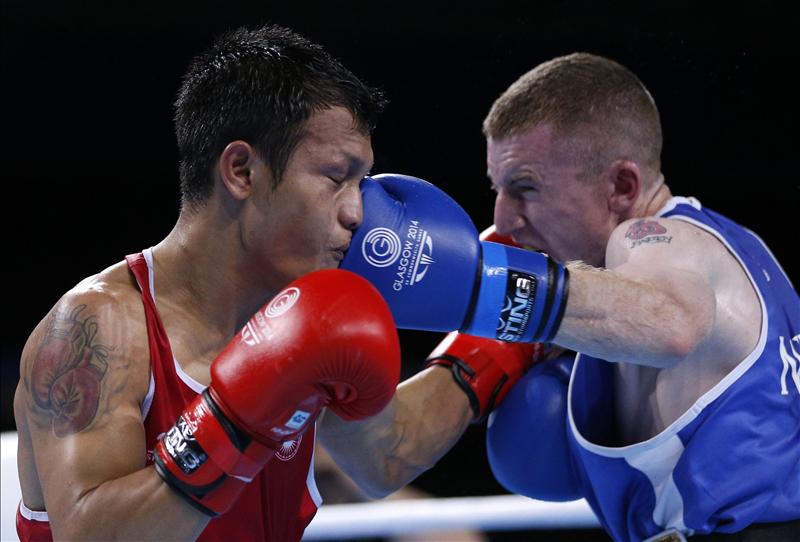 THE boxing tournament at the Commonwealth Games is the kind of competition where the underdog can have his day. Darren Barker [above], the former middleweight world champion, won the Commonwealths in 2002 in Manchester. “I was a wildcard when I got picked for the Commonwealth Games. I’d boxed for England three times previously,” he said. “It was our last open training session before the Commonwealth Games started. We all sat on the ring apron and one by one they were getting picked out by the press, we had some real stars of the amateur game at that time, David Haye and Courtney Fry, there were loads. I was the only one who didn’t get asked for an interview and I just thought, ‘Right, I’ll show them.’ I went on to win.”

You have to adapt your boxing to a style that suits the scoring system. “I’ve improved every year and you need to, the scoring system changes every year. You have to change your style every year to suit the scoring system. You need to play by the book, you need to adapt to the system,” said 2010 light-flyweight gold medallist Paddy Barnes. Another Delhi Games gold medallist, Thomas Stalker emphasised the point. “It’s a lot different now. It’s more professional style now with 10-9 rounds. Back then it was points. When you knew you were up you could hold on to your lead. But now it’s 10-9 rounds. You’ve got to have a good workrate and be the busier and the more eye-catching fighter,” Stalker explained.

The Games period, like other big tournaments, may last for a couple of weeks, but the competitors can’t afford distractions or to get ahead of themselves. “People thinking you’ve won the fight before you get in the ring, that’s pressure, Stalker said. “I always boxed best when I was away from home because I was away and could just concentrate solely on my boxing. In Scotland, as I say to everyone who’s going, don’t be going on your Twitter, just switch off until the end of the competition. If you win a fight and you tweet everyone, you get into praising yourself before you’ve actually done anything. So I think it’s important to get the competition out the way. Then you go on Twitter and write back to everyone.”

The boxers have to dispel their own doubts. “I was European champion and my confidence was sky high. I believed I couldn’t have lost. I had that mentality. I’m going to bring that mentality to these Games too,” says Paddy Barnes. “Just stay confident in your own ability, go out there and prove everyone wrong,” Darren Barker continued. “Give everything in the ring. That would be the same advice I would give anyone in there. Whether it’s the first fight or the final, give it everything. Leave it all in the ring. Don’t have regrets when you wake up in the morning.”

“I think it helps having a bit of nerves there, it’s getting the balance right. If it’s feeling too extreme or too overwhelming, it can get the better of you,” Darren Barker says. “I’d only boxed in one tournament [before], so I did find it tough. That whole build-up from the moment you’ve been picked to the moment you’re at the Village, to the moment you have your first fight, to the moment you have your last fight, you’re always nervous. You’ve always got those jitters. For a pro fight you have the training camp, you have that one fight and it’s all finished. [At the Commonwealth Games] it’s one after another. You’re constantly nervous, you’ve constantly got butterflies, constantly feeling a bit of pressure and not wanting to let people down. It’s tough but I’m sure they’ll be fine.

“You’ve got to try to take one fight at a time, one training session at a time and concentrate on the job at hand.” Stalker used the team around him to cope. “You’re better off putting yourself with good people. Your team-mates, you’re going through the same thing as them. There’s no point speaking to anyone out of the camp. Your coaches and your team-mates, just surround yourself with them who are going through the same thing as you. That’s the best thing to do,” Thomas said. “Two weeks is not a long time and it’ll be over before you know.

“Just enjoy it. It’s like a mini-Olympics, with the exposure you get. Take each fight as it comes and don’t look past anyone,” Stalker said. “Five fights and you’re a Commonwealth gold medallist so it’s a big incentive.” Barker echoed the theme. “For me it definitely catapulted me into a new light. I became an England regular after that. It was a special Games for me [in 2002], being in Glasgow it’s basically a home Games. Just enjoy it as well. It’s a special tournament, a special one. Everything from the Village, the people, the supporters, it was a great occasion. I’ve got so many fond memories, aside from actually winning it.”