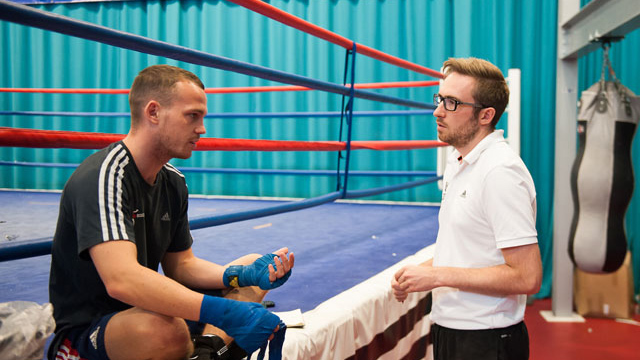 It’s a myth that there has to be something wrong in order for you to get benefits from sports psychology. Yes, it can help areas where you’re struggling but it also might be that you’re looking to be at your peak mental condition and that might actually involve making sure you’re really clear on your tactics, confident in your method or using it as part of your goal-setting process around your physical characteristics.

When preparing for competition I like to break it down into lots of small phases, from the evening before to the time of the bout. The night before a boxer can make sure everything is ready and may do a little visualisation around how they’re going to be boxing tomorrow. That will be individually focused, thinking about their strengths, what they have been working on, what the tactics are likely to be and how to box at their best – their method. To get a good night’s sleep, as human beings we are quite habitual. We like to follow certain patterns. A lot of the boxers will have certain routines which help them get to sleep.

The weigh-in will form part of their routine. In the morning we always have a tactical briefing. Again when they step into that briefing there’ll be certain things within that briefing that a boxer will want to make sure they’ve got clarity over.

STAY IN THE MOMENT

One of the things we work on is staying in the present moment. In that hour before they box, even in the 10 minutes before they go to the ring, the pitfalls are two things: either they’ll look too far into the future and start to become a little bit anxious about what’s about to happen: ‘My opponent might be strong, he’s beaten this person etc.’ Or they might start to dwell backwards and think: ‘Have I done enough?’ and start to question themselves. Staying in the here and now and remaining in contact with the present moment is so important for psychological success.

Being able to notice when your mind is drifting and without judgement being able to come back to the here and now, focusing on what you are doing at the exact moment is a great way to remain calm going into the ring. Going over tactics and practising these on the pads and noticing the calmness of your breathing is one such practical way of helping this process. That said, it’s all dependent on the individual but the whole common theme is staying in the present moment. If the boxer can do that successfully, when they go to the ring they’ll feel far better and more in control.

People underestimate how important breathing technique is and how much oxygen you can get into your lungs if you breathe properly. We also know controlling your breathing rate has a massive impact on controlling your heart-rate, which has a big impact on feelings of stress and anxiety.

So in between rounds making sure you get good breaths in with good technique (from your diaphragm), taking on board enough oxygen makes it easier for you to stay calm and makes it a lot easier for the coaches to put across what information they feel is important for the next couple of rounds. That again is a massive part of staying in the moment, taking it round by round.

The debrief that we do plays a big part. We like to bring it back to what actually happened in there. Are there certain things you didn’t quite do, are there certain things your opponent did better than we thought? By bringing it back to logic, it gives you an opportunity to put in new development plans. Because when we do respond to things logically, it’s far easier to set new goals. It gives people far more feelings of control that they can do something about it. As soon as you relinquish that control and say, ‘The judges have robbed me’, it makes it far harder for you to be motivated to improve.

No matter if a boxer has won and won well, we will always look for those little marginal gains when it comes to improvement.

It’s what works for you. Let’s say you’re boxing at 8pm. You might like to be at the venue for 6pm, to take in the environment, then get your hands wrapped at 6.45pm, seven o’clock look to start to get warm, start to stretch off, in my mind I want to be going through my tactics. It’s just having a process that gets you mentally warm just as you like to get physically warm. Whether it be through visualisation, whether it be through talking with your coach about the tactics, whether it’s through following the tactics on the pads before you go in, the time and place that you do that. All of that’s important to get you mentally switched on. It’s important you practise this in training. Make sure you do the same things when you go into that training environment that you want to do in the bout. Practising those things before a spar will probably help you out before a contest.