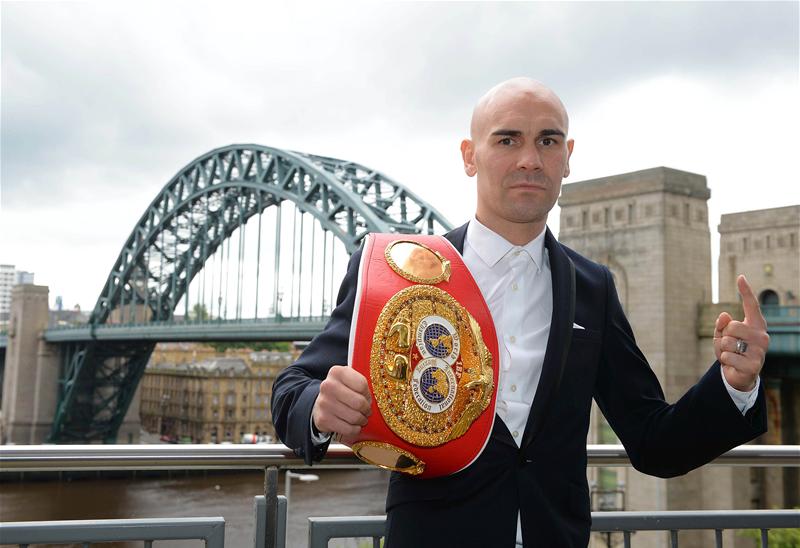 A FEW years ago it was Ricky Burns. Now Stuart Hall appears to have assumed the unofficial mantle of Britain’s most improved boxer. Improvement is not a freak occurrence or a stroke of luck, but comes through hard work and, often, innovation. If a fighter keeps doing what they have always done, then they can logically expect the same results.But Darlington’s Stuey learned lessons from his defeats to Jamie McDonnell and Lee Haskins to become a world champion. Here, in his own words, he explains what made the difference.

DO STRENGTH AND CONDITIONING

One of my best mates and a personal trainer, Johnny Harrison, he’s now my strength and conditioning coach. We brought him on board after the Lee Haskins fight [a wide points defeat – Hall’s last – in July 2012]. Since then, I’ve been a different person. I wasn’t doing any strength and conditioning, I wasn’t moving with the times. I was just training in the boxing gym and sparring. I won a Lonsdale Belt outright without any strength work. All my muscle groups were depleted when I went to see Johnny. He said, “I can’t believe you went 12 rounds, never mind won a Lonsdale Belt.” He knows me, knows my body and I trust him because we are such good friends. I’m now working different muscles, and I’m feeling even stronger now. He’s also a good, positive thinker. I work with Johnny four days a week during training camp. I didn’t stretch much before but I stretch every day now. We also monitor my heart-rates so we always know what it’s doing. We do strength work and balance work. Some of it we call ‘Mr Miyagi’ work, you know the character in Karate Kid who gets Daniel to paint the fence but really he’s learning to block strikes? I’m doing stuff and then in the ring I do it without even thinking. We work on agility, core stability, movement.

After the Vusi Malinga fight [Hall heroically overcame a terrible swelling around his eye and a tough opponent to win the IBF bantamweight belt in December], we added a nutritionist in James Milburn. Before Malinga, I was still having a Toby Carvery [roast dinner] after the weigh-in. I’m still learning. For the Martin Ward fight [a 3-35 technical draw in March], in all honesty I felt the best I’d ever felt walking in the ring and in the first round. I’ve had to cut out so many things from my diet. James said my diet was okay but, for example, I was drinking loads of coffee, I didn’t think it was bad for you! I was also eating lots of bread, taking nowhere near as many supplements as I needed; I’d just have my protein shake in the morning and after training and I thought that was enough. I’m like a robot now in camp, it’s so specific, the times to eat, drink and what I take with which meals. During camp, I now cut out bread, coffee, tea – I’m only allowed green tea – and, believe it or not, pasta. Basically, in camp, I eat rice, rice and more rice, as well as potatoes. I’m allowed olive oil on a spoon but I can’t cook with it – I cook with avocado oil. I eat steak for breakfast which is a treat for me because I like steak. I used to eat porridge for breakfast as I thought, “It’s carbs, it gets me ready for training”, but now I have no carbs before training and I feel awesome. I don’t have a treat meal, my treat is to have a tiny bit of gravy with a meal. Tap water is a no-no now, I only have mineral water. You’ve got to be totally clean. People go on about my age as I’m 34, but if you live the life, the body lasts longer.

People say you have to up your game to win a world title and that’s exactly what we did. It was always just me and [trainer] Mick [Marsden] before, we didn’t have a team. Then I lost to Lee Haskins, I didn’t perform and I was going to pack it in, wind it up. Johnny said, “Give me a couple of weeks”, and I began to enjoy it again as it was something new. Mick has also upped his game a lot, he’s speaking to Johnny throughout the week about what each of them need from me and each other, plus he’s been working on the different sides of boxing. He’s trying to get me to move a bit more, even though I’m not a flashy fighter. He’ll do that on the pads, on the bags, he’ll have me jabbing and rolling, moving my feet a bit more. People say I move in straight lines and sometimes I do stay static and that means I take shots, but Mick is coaching me through it. We are trying to get to a stage where I do the right thing without even thinking about it.