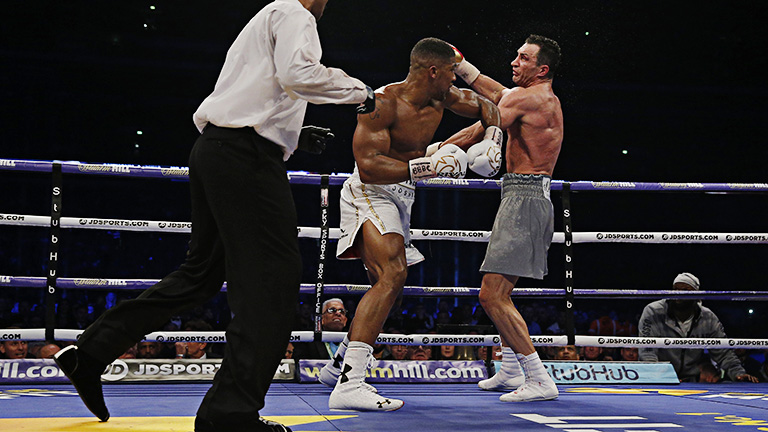 'I don’t just watch boxing now, I understand it.' Anthony Joshua on the formative experience of fighting Wladimir Klitschko at Wembley stadium

ANTHONY JOSHUA discovered something different about himself when he fought Wladimir Klitschko. The two collided at Wembley stadium on April 29 2017, battling for the WBA and IBF heavyweight titles. They traded knockdowns before Joshua finished the former champion inside the 11th round, in what was an instant classic.

That experience has given Joshua a new perspective on boxing and on himself. “Now when I watch boxing, I watch it completely different. When you watch a George Foreman and Ron Lyle kind of fight or an Ali and Foreman fight, where a bit of their soul and spirit disappears, I always wondered how they were doing it. And how they were taking those shots,” he said.

“You always question how, why, and what makes people do what they do. Until I went through it, I would always watch boxing but now I don’t just watch it, I understand it. I know the thing that you can’t be taught is how to survive in the trenches. I just feel like my heart is very big and I wear it on my sleeve in this sport.”

He continued, “It’s just that mindset. I’m willing to do whatever it takes to win, that’s one thing. I just realized, as well, what the division needs. Because I think the masses of people can relate to a boxer’s life. It’s labour, you’re up early, working, you’re resting and providing for your family. There’s also the glitz and glamour of getting money but that disconnects from so many people. The wealthy people are one percent of the world, so people just want to see you fight. They want to see you go to war. That’s another thing I’ve learned… what people want and desire for in this sport to kind of bring the attention back to boxing. I don’t just do it, I don’t just watch it, I really understand it. I know what to do to deliver.”

He is following in the footsteps of Lennox Lewis, one of Britain’s greatest heavyweights and greatest fighters, as he looks to dominate the heavyweight division.

“It’s an honour at this stage [to be compared to Lennox]. I’m going to do some research and see where Lennox was at in terms of career building going into his 20th fight. I feel like Lennox is definitely someone I can learn from. If you gave me a list of boxers I could learn from, I would put Lennox in my top 10, 100 percent. If I can perfect that jab. This is what we’re doing, this is the journey we’re on,” he said after the Klitschko fight.