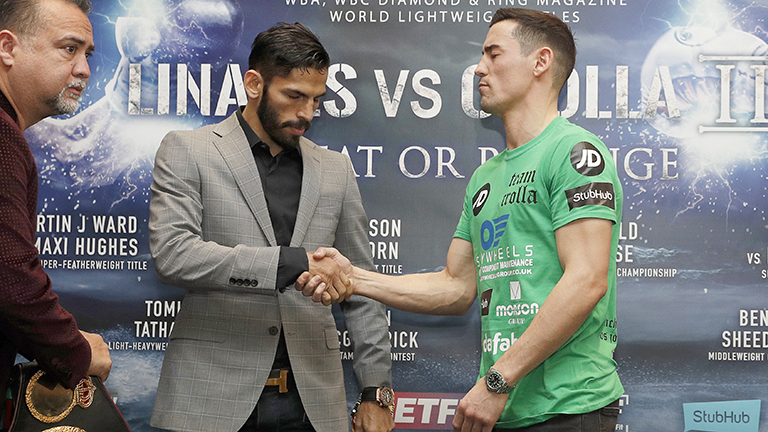 Jorge Linares vs Anthony Crolla is likened to Hagler-Leonard

JORGE LINARES used his big fight experience to “mug off” Anthony Crolla in their September clash last year, according to the Mancunian’s trainer Joe Gallagher.

Linares outpointed Crolla over 12 thrilling rounds in Manchester to lift the WBA lightweight title and this weekend returns to Crolla’s Manchester Arena fortress for a rematch.

Though Linares’ victory was unquestionably deserved, Gallagher feels the Venezuelan was not consistent in his work, particularly as the fight dragged on.

“With that big fight experience Jorge Linares, as I call it, mugged us off, shoe-shined us and when his tail was up going into rounds 11 and 12 we weren’t catching him. But that’s experience, you can’t buy it.

“Like I said at the end of last year, you can’t win them all, but as long as the lads learn from the losses, that’s what is important.”

Gallagher is not claiming the first fight was a robbery, but he feels he saw chinks in Linares’ armour and plans for his man to exploit them on Saturday night.

In fact, he has huge respect for Linares, a three-weight world champion, and even believes Jorge does not get the credit he deserves.

“I think it’s lost on a lot of people just how good Linares is, he’s an exceptional fighter, ” he said.

“Linares deserves all the plaudits, we’re in for a huge fight, he’s an exceptional talent.”

In September, Linares and Crolla produced some phenomenal action – paticularly in the sixth round, when both men were hurt.

Ultimately it was Linares’ sharp combinations and speed that saw him through, though Crolla forced the best out of him. Gallagher has even gone so far as to say the two fighters match up in similar ways to Marvelous Marvin Hagler and Sugar Ray Leonard, who fought in 1987, with Leonard winning a controversial decision.

“What you’ve got here, and I’ll get slated for saying this, stylistically you’ve got a Hagler against Leonard type of fight,” he said.

“You’ve got Hagler [Crolla] with constant, steady work or you’ve got Leonard [Linares], whose eye-catching combinations are catching the judges’ eyes.

“When we had the stats back it shows, Linares’ early combinations won him rounds, but Crolla’s steady shots were landing just as much. Crolla threw more power shots and landed more in round one, but they all gave it to Linares.”