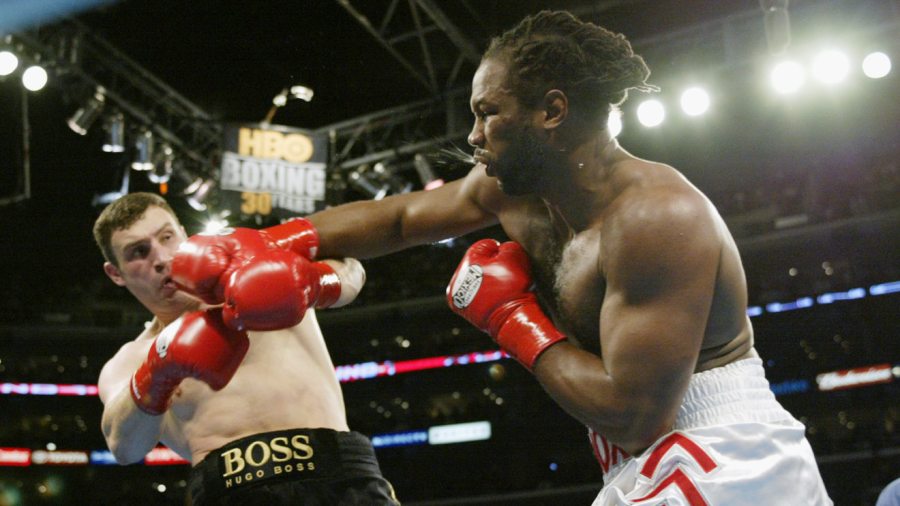 But Lennox Lewis discusses the principles that helped him navigate his long, distinguished career with Matt Christie

IT’S apparent when watching the excellent new documentary, Lennox: The Untold Story, that Lennox Lewis’ steely mindset was his greatest friend. He learned from an early age to believe in himself, to trust himself, and in turn who to believe in.

Lewis was a stickler for loyalty.

Though he changed his trainer (or ‘captain’, as he called them) three times during his professional career, the rest of his team remained pretty much the same from the start. It was a team that Lewis carefully selected himself but to gain entry, one first had to gain Lennox’s trust.

With an Olympic gold medal around his neck, there was no shortage of characters auditioning for work with the talented young heavyweight. “There were a lot of people in boxing when I was thinking about turning professional that would do a lot of talking and tell a lot of porky-pies,” Lewis tells Boxing News. “A lot of them said the right things, they were believable but I wanted people I could really trust.”

John Davenport was Lewis’ first professional ‘captain’ (he would be replaced by Pepe Correa in 1992 before Lennox joined forces with the legendary Emanuel Steward in 1995). Beneath Davenport was Harold Knight, the former fighter who was with Lewis until the end.

Another mainstay in Lewis’ training team was his physical conditioner, Courtney Shand. Lewis and Shand went back a long way but the fighter needed to go to extreme levels to ensure his old school friend understood the importance of honesty and trust.

“We were classmates in public school. Then I went into boxing and had my amateur career and went to the Olympics,” Lewis explains. “While I was doing that he was studying Physical Education in school. I needed a man that knew about that, I needed to get in great shape and I wanted Courtney to help me.

“But first I wanted to cement trust in Courtney’s head.”

To do so, Lewis got into a car on the driver’s side and asked Shand to join him. Lewis turned the key and started to drive. He then told his friend that he was going to close his eyes and he would only turn or brake if Shand told him to do so. Before Courtney could object, Lewis closed his eyes and put his foot on the accelerator.

“That’s right,” Lennox chuckles, remembering the incident fondly. “It was down to Courtney to tell me which way to go. ‘Just tell me when to turn, you’re the one watching.’

“That’s when he knew he could trust me and I could trust him. There are things you don’t know about Courtney, he would shout things to me at ringside, things only I would understand and act upon in a fight. It was a matter of trust.”

At a similar point in history to when Lewis was driving blindly down Canadian roads, he had his eyes wide open in meetings with the wily old promoter. Lewis declined King’s advances, time and again. He would sign professional terms instead with UK promoter, Frank Maloney.

Six years later, with Lewis back in London, the city where he was born and the city he trusted, King would get his revenge.

In North London, late at night, Lewis walked into a hotel function room beside Wembley Arena wearing a tracksuit and dark glasses and straight into the eyeline of a wine-fuelled Don King.

Sitting opposite the promoter on a table for two was referee Jose Guadalupe Garcia, the Mexican official who hours before had wrapped his arms around Lewis and declared McCall the winner and new champion. To most observers, the stoppage – which came after Lewis signalled he was good to continue after being felled by McCall’s mighty right hand in the second round – was contentious at best. To others, like the HBO Boxing commentary team, it was a crooked and premature end to Lewis’ first reign as a heavyweight titlist.

“I saw Don King with the referee at the fight after-party, eating a late dinner. King sees me and he’s happy to see me, he’s too happy,” Lewis recalls. “Seeing them together like that, I knew he had to have some kind of part in it [the stoppage]. This is some lineage they had kept up, it seemed odd and suspicious [that they were together].”

King, a cigar-sucking, flag-waving powerhouse of a man who had a knack for getting his own way, had been relentless in his pursuit of Lewis.
In 1993, on the eve of Lewis’ first WBC title defence against Tony Tucker, King’s staff wrote an open letter to Lewis that attacked “mental midget”

Maloney’s handling of the champion and pushed it under the doors of media members’ suites in Las Vegas.

“Don King tried a couple of times to get me,” Lewis recalls. “But I was warned about Don King long before I even turned pro. ‘Watch out for Don King, he makes people sign contracts and then he fills them in afterwards.’

“Then when I met him he was so lovely I couldn’t believe he was the man who everyone had been saying this stuff about. But I purposely stayed away from him because I looked at his history and I realised nothing good came from him. Everything that was good, came to himself. So I felt it was necessary to stay apart and forge my own journey.”

Keeping King at arm’s length was one thing but, when it came to heavyweight boxing in the Nineties, truly keeping King at bay was another thing altogether.

March 13, 1999: After Lewis had regained the WBC belt he beat McCall in a rematch for the vacant belt in 1997 and notched four impressive defences, he signed to fight IBF and WBA champion Evander Holyfield in a unification showdown designed to crown the first undisputed champion since 1992.

Kelly Brook was struggling with her lines on Big Breakfast, Boyzone were battling with Britney Spears for Number One, Stereophonics had replaced The Corrs as the best-selling album and Don King, the promoter of Lewis-Holyfield, was preparing to make an even bigger racket.
The fight was widely anticipated. Holyfield came to the ring singing Gospel with a promise to KO Lewis in round three. That third session was among the American’s best rounds but he never came close to stopping Lewis. The Englishman boxed sensibly and effectively and at the final bell he celebrated as the crowd cheered his name.

Then came the scorecards and arguably the most notorious decision in heavyweight history. Lewis’ face was a picture when the first card was announced: Judge Eugenia Williams had scored it 115-113 in Holyfield’s favour. Stanley Christodoulou briefly restored order with a 116-113 vote for Lewis before Larry O’Connell’s 115-115 tally rendered the bout a highly dissatisfying draw.

Lewis immediately turned to Don King, the perceived villain of the piece with a pumpkin grin.

One week after the showdown the fight made it onto the front page of the Sunday Mirror. They claimed payments of $30,000 had been deposited into a bank account the newspaper believed was associated with Williams, the judge appointed by the IBF who had filed for bankruptcy six weeks before the fight.

Lewis still has his suspicions about that wonky scorecard. “I don’t know,” he says, “I’m not sure because I wasn’t there, but when suspicious money ends up in the judge’s bank and she can’t explain how it got there, it really speaks for itself.”

In January 2002, Williams cleared her name when she won a libel suit against the British newspaper. Awarded “significant” but undisclosed damages, Williams – who had continued to judge fights in the interim – said: “I was horrified by the Sunday Mirror’s false accusations and am delighted that the Sunday Mirror have now accepted their allegations were untrue and have apologised to me.”

She never apologised to Lewis but did admit she had probably scored the fifth round incorrectly, a portion of the fight she inexplicably gave to Holyfield despite him only throwing 11 punches to Lewis’ 43. “My view was different to the cameras,” she offered by way of an excuse.
Lewis won the rematch on points but he feared the worst at the final bell.

“You know when you fall off a horse and you get straight back on?” Lewis explains about the decision that gave him the most pleasure. “So I had that feeling in the rematch, I was concerned they could take it away from me again.”

By 2001, he was chasing Mike Tyson but there was to be one final blip along the way. And this one could not be attributed to Don King in any way.

“I was waiting for Mike Tyson,” Lewis reflects. “He was still going through his little problems with the court so we couldn’t get that fight.
“We looked down the list of the Top 10 and we needed someone that was going to last, it can’t be someone that I’m going to knock out easy. Who was tough? Who is a proper opponent?

“We came up with Hasim Rahman.”

Lewis-Rahman was set for Carnival City, Brakpan, Gauteng in South Africa on April 22, 2001.

Strange things were in the air. More people were buying Emma Bunton albums than Billy Joel’s, millionaire Dennis Tito became the world’s first ‘space tourist’, actor Christopher Walken turned in a career-best performance in the Fatboy Slim video Weapon Of Choice, Manchester United signed Ruud Van Nistelrooy for a record fee and Rahman, a thick-set slugger from Baltimore, was on the brink of volleying Lewis to defeat. Lewis arrived in South Africa only days before the fight. He had been filming Oceans 11 in Las Vegas and was accused of taking the fight lightly. Asked if he’d have arrived so late if Tyson had been the opponent instead of Rahman, Lewis admitted he would not.

“I felt I could have done it at the time but you look at it later and you question it. ‘Boy, should I have done that?’

“What really hurt was the high altitude. I had only experienced training in high altitude once before, and that was when I was in the amateur team. As a professional, it’s more labouring.”

Even late in his career, Lewis had learned a crucial lesson. He blames only himself for being knocked out in five rounds.“The altitude really threw me off. It wrecked my timing.

I threw a combination and then I couldn’t breathe. It stopped me from going full tilt, I had to dress back a little bit. That messed me up, my timing was off.

“When I came back, as everyone could see, my timing was on.”

Lewis’ sense of timing didn’t desert him again. After thrashing Rahman in four rounds in the rematch, he defeated Mike Tyson in his next bout and then retired at exactly the right moment after repelling the spirited challenge of Vitali Klitschko.

Today, Don King – though he flirts shamelessly with every new face – is a distant memory in the world of heavyweight boxing. One can attribute his demise to Lennox Lewis, who remains the last true heavyweight king.