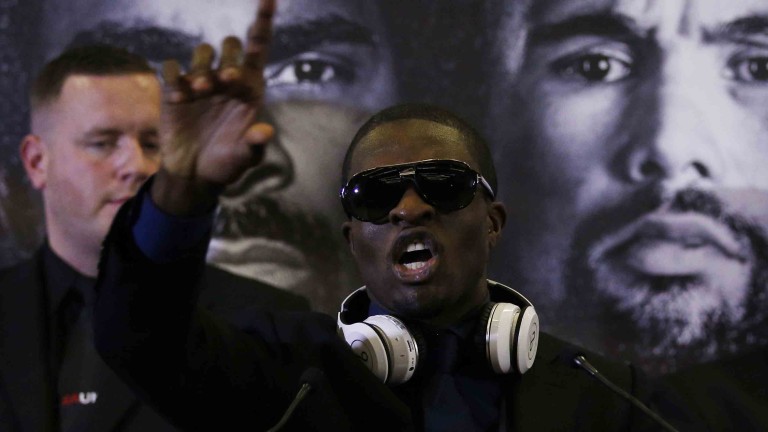 The controversial Ohara Davies is one of the great polarising figures of British boxing. But has he gone too far? Elliot Worsell investigates

He has won most of all, though, because boxers like Ohara Davies always get talked about, always make good money, and always come out on top. At least that’s the way it works in the land of OD.

It’s the sort of thing Ohara Davies tells himself before his head hits the pillow every night and before every training session, every run, every meal, every video he hopes will go viral and every insensitive tweet grenade he aims at the entire city of Liverpool (the latest, by the way, mentioned a certain tabloid newspaper). Others, meanwhile, tell Ohara Davies he needs to be more than just a boxer and that his belief in this mantra, nice guys finish last, will serve him well so long as he doesn’t take it to its extreme, which is to say do something politically incorrect and become The Ultimate Baddie.

Do that, they say, push it too far, and you’ll finish last. You’ll lose.

When it goes wrong, as it did in December, it could be argued social media is to blame. After all, without it, how many of us would have heard of Ohara Davies, let alone find him offensive? Its existence and prominence, for better or worse, gives boxers a voice they were once without and allows them to self-promote away from traditional, regulated channels. Emancipated, free from the shackles of their promoter, they can say whatever is on their mind, and create a character, a persona, that might be close to the real thing but might also be something else altogether.

Who, in that case, is Ohara Davies?

Ohara Davies is 25 years of age and a good, powerful, exciting super-lightweight from Hackney, London. His professional boxing record is 16-1. He’s had to do it – boxing, life – the hard way. For all I know, he could be a kind, generous and modest young man. He might spot old ladies struggling to walk and help them cross the road. He might have gone carol singing at Christmas. He might love The Beatles and sing ‘Yellow Submarine’ in the shower.

But that’s not the character he wishes to portray online, nor one he believes will get him very far in his chosen profession. Alas, we are treated to something else. Something bigger, nastier, uglier. Something one hopes does a disservice to his true personality – he can’t be that bad, surely? – but, he hopes, generates buzz and attention his true personality, and boxing ability, isn’t capable of generating alone.

That’s the thing with personas in combat sports. Create one and you think you’ve sussed the game. (If savvy enough to get it right, you have. You’ll receive publicity and make the kind of money your peers, those without a voice, those unwilling to wear bright colours and say outlandish things, can only imagine.) But isn’t the mere creation of a persona and the need to speak out of turn, aware of the repercussions, in some way an admission that the boxer in question understands they are not quite as good as advertised?

This was certainly the overriding impression the night Davies succumbed to Josh Taylor and emerged not as a blue chip prospect, the tag hung around his neck beforehand, but as an explosive puncher with flaws and limitations whose future now relied more on his tongue than his talent.

It was Taylor, not Davies, who arrived as a potential world champion in July. It was Taylor, not Davies, who proved he is the superior boxer. Yet Davies appeared nonplussed by it all. He shrugged his shoulders, quickly brushed himself down, and maintains it is he, not Taylor, who will continue to grab the column inches (retweets and likes in today’s parlance) and find himself involved in lucrative fights triggered by what’s nowadays described as ‘beef’.

It’s the way of it, I suppose. Always has been, always will be. Davies knows this, just as his promoter, Eddie Hearn, knows this.

“Fighters have got to carve out their own image,” he told me last year. “Ohara Davies is a good example. He’s a car crash on social media. But I’ll tell you now, people will have an opinion on him. Ninety percent will hate him and want to see him lose, but at least they are talking about him. At least he’s in their mind. When he’s on, you’ll tune in. You’ll either say, ‘Yeah, I like this guy, he’s gobby,’ or you’ll go, ‘Jesus, I follow this guy on social media, what a p***k, let’s see what he’s got. That’s better than the alternative which is, ‘Who is this guy? Oh, he’s all right.’ You’ve got to have something.

“A lot of the time it’s our job (as promoters) to carve that out. I always say, ‘What is your story?’ Even if it’s cheesy, even if it’s as simple as you coming from Wales and wanting to be the next Joe Calzaghe, make sure you tell that story. Only a small percentage of fighters are going to come out with an image or the chat to do that, so we have to find that sometimes.”

By all accounts, Hearn didn’t make his fighter apologise for his latest outburst, yet there was an apology nonetheless. A strange thing, too, that apology. It pacified a few; confused many more. For if Davies is going to play the heel, issuing an apology following a heel power move is akin to a serial killer embarking on a bloody rampage with an accompanying team of paramedics. It defeats the whole point of the initial act.

What’s more, the measured apology suggested Davies isn’t the bad guy he thinks he is but is instead playing the part of a bad guy and isn’t quite sure how bad he is allowed to be in the current climate. He’s the worst kind of bad guy: a bad guy who says sorry; a bad guy who probably isn’t really a bad guy at all.

Here is the last I will speak on the subject to which I sincerly apologise again to those i offended in my ignorance. pic.twitter.com/Vyppm7ZV6y

Bizarrely, pinned to the top of Ohara Davies’ Twitter account is “a message to all my haters,” accompanied by a 90-second video that’s 90 seconds too long. In another tweet, he tells someone he doesn’t love boxing and boxing doesn’t love him, either, and often he will explain, boast even, that the sport is merely a way for him to make money and that money is all that matters.

That’s all fine. He’s entitled to say what he feels. But there remains a sense it’s always a bigger drama and battle in his head than it is in anyone else’s (who, let’s be honest, has the time to hate a WBA international super-lightweight champion?), and that’s the worry with an impressionable 25-year-old like Davies, someone who has skim-read the manual, believed he has taken it all in, yet is somehow missing vital information. He has scanned the title page and the contents but then, driven by ego and impatience, gone directly to the index to see if his name is mentioned, ignoring the rules and the history entirely.

If he’d done his research, he’d have realised the beauty of polarising figures like Muhammad Ali, Mike Tyson, Chris Eubank and ‘Prince’ Naseem Hamed wasn’t their petulance, arrogance and abrasiveness but their ability to be many things all at once. Good and bad, humble and egotistical, honest and deceitful, accessible and aloof, likeable and unlikeable. They were fully-formed characters. Proper people. They were 3D, not OD. (They were also spared the mousetrap of social media.)

In short, it’s okay to be an a***hole, but be a brilliant one. Earn your right to be an a***hole. Learn how to be an a***hole. Because, if you’re not brilliant, you’re just an a***hole. And, rest assured, nobody wants to pay to watch an a***hole, irrespective of whether the a***hole wins or loses. You’re not that important. You’re quickly irrelevant. Life’s too short. Attention spans nowadays are certainly too short. (Ironically, just as this social media-dominated world gives athletes like Davies a stage on which to act up, the merciless, cutthroat nature of its users ensure it can just as quickly be taken away.)

If you’re not Floyd Mayweather and you’re not brilliant, you can still get attention, create controversy, and make more money than your rivals, but you have to go about it intelligently. You must have more to your game – your persona – than spite and hatred and juvenile putdowns. There must at least be a semblance of charisma, a tongue in cheek, a bit of swagger, some playfulness and some creativity. You can’t solely be an a***hole. You can’t say everything that is on your mind, recklessly incite hate, bring your sport into disrepute and then flatter to deceive when crunch time arrives. Do that and history suggests your career will be short-lived. Do that and opportunities will soon dry up. (Davies was rightly removed from a February 3 fight at the O2 Arena by Eddie Hearn as a consequence of his December tweet.)

Unfortunately, Davies has long been a pawn in this game, so will invariably continue along this path. He has been taught, through boxing’s dark magic, that the quickest way to a meaningful fight on a meaningful platform is hate. Not titles. Not talent. Hate. He got it with Derry Mathews in Liverpool, a fight sold on animosity, and he hit the jackpot again in Scotland when spanked by Josh Taylor. It’s a formula he knows back to front; one he has used to his advantage; one employed by many others (some of whom have said and done worse); one encouraged by those around him.

Yet now, as Ohara Davies enters 2018 with a defeat on his record, this same formula could be detrimental to his career. His stock has fallen, supporters are disappearing, and all of a sudden he’s in need of guidance, a script and a Plan B. Talk about mixed messages. Talk about confusing the vulnerable.

He’s not alone, nor solely to blame. This is the age of dumb and disposable. Dumb gets you noticed, dumb gets you rich, and anything above and beyond – like, I don’t know, talent – is considered a bonus rather than a prerequisite. Our television stars are dumb, manufactured and packaged that way, and our sports stars, the ones known more for antics than achievement, are similarly inclined to choose stupid over substance.

Adrien Broner, for instance, can’t match Floyd Mayweather, his idol, in the skills or legacy department, so he cranks up the stupid. He zeroes in on every reprehensible Mayweather trait he can identify, realising this is the stuff he can best relate to and replicate, and attempts to go one better, embracing infamy along the way, content to be washed up at the relatively tender age of 28.

The concern for Ohara Davies is that he’s attempting to do the same. Only his template, the man with whom he has most in common, the man whose achievements are currently out of reach, isn’t Floyd Mayweather, the wealthiest and best boxer of the modern era. It’s Adrien Broner.