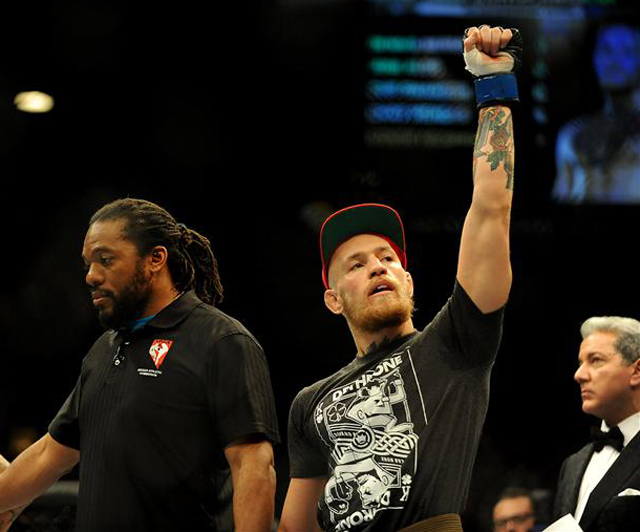 Olympic bronze medallist Tony Jeffries has trained UFC fighters, witnessed Conor McGregor in training and, in an exclusive interview, shares his expert analysis of the Mayweather fight with John Dennen

Jeffries is an Olympic boxing bronze medallist, he has trained MMA fighters and has seen McGregor working out in his Box ‘N Burn gym in Los Angeles. “Conor McGregor comes in every time he’s in LA. He trains with us regularly. He boxes,” Tony tells Boxing News. “He’s a really good guy, he talks to everyone.

“He was hitting the heavy bag and I stood and I was waiting for the round to end and the round ended but he kept going and he kept going. I was there for 15 minutes. And I thought, ‘I’m not even going to wait.’ His workrate’s non-stop. This guy doesn’t stop working.”

Jeffries has also watched him sparring Chris Van Heerden. “He did alright against him. He did alright. His boxing was good. I was surprised I thought he was going to be terrible because most MMA fighters, they can’t box when it comes to actual boxing, because they’ve got to concentrate on the kicks, the takedowns, the rest of it, jujitsu. He looks like a professional boxer. I was watching him spar with Chris, I thought he was a decent boxer. I think he could do alright as a pro,” Tony said. “If he started as a professional boxer and went through the ranks, I think he would do alright. Going against Mayweather in your first fight, that’s you know, good luck with that.”

There are particular technical points MMA fighters need to factor in when it comes to boxing. There isn’t a straightforward overlap between the two sports. “With MMA they’ve got to be aware of so much. You’re not just protecting your head and your body but you’re protecting your legs from kicks, from getting taken down. I’ve worked with Brendan Schaub for his last three fights I was his head trainer, I worked with Ronda Rousey. It’s hard to teach. You’ve got to look at it from their point of view. Because if I start teaching them how to fight like a boxer, have their hands high, they’ll get taken down or they’ll get kicked in the legs or kicked in the head. There’s a lot to think about. I loved it. I loved the challenge,” Jeffries said. “If an MMA fighter’s going to train boxing, they’ve just got to train boxing, because right now they’ll do an hour’s boxing, an hour’s jujitsu, an hour’s wrestling in one day. With all that time and energy put into just boxing, I think they’ll do alright.”

And would his MMA skills bring him an advantages, even if he tries to bend the rules? “Up close McGregor will be able to throw him around like a ragdoll. He can transfer the weight in the clinch and do anything, he could clinch Mayweather and Mayweather will never move. But obviously that’s illegal. Try and throw some sneaky stuff inside of that. That’s one thing, on the inside Mayweather wouldn’t be able to get out. But you’re not going to be able to fight like that,” Jeffries mused. “Mayweather will not have a weak referee.”

Great to have @TheNotoriousMMA in @BoxNBurn today sparring-

While he’s not forecasting any surprise upset, Jeffries would still like to the event take place. “I think it’s good. I think it’s really good. I hope it happens, I really do. I’m never going to pick Conor to beat Floyd Mayweather,” he explained. “It’ll be the biggest boxing match of our time. So even if it’s a bad fight, and I can’t see it being a worse fight than Mayweather’s last fight against Andre Berto, I can’t see it being worse than that. I think it’ll be better than that. I think Mayweather can beat him all day. I just think it’ll be a great event to watch. I think it’ll be a once in a lifetime event, so why not have it in our lifetime?”