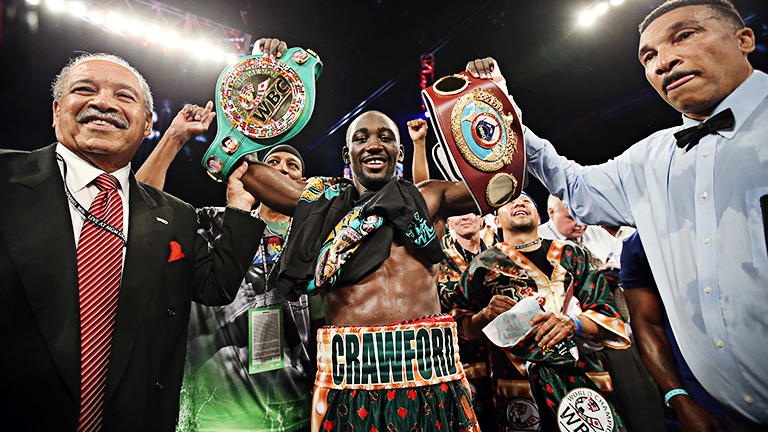 If things go to plan, we'll have two undisputed world champions in our midst

BOXING has not had an undisputed world champion since Bernard Hopkins held all four major middleweight titles in 2005.

There have been countless unified champions who have held several belts at the same time, but since Hopkins no one has been able to keep the IBF, WBA, WBO and WBC happy all at the same time.

In most divisions, it is clear who is top dog but no fighter on the planet currently owns every major belt up for grabs in his division. At middleweight, Gennady Golovkin has three and desperately wants them all. Anthony Joshua holds two heavyweight titles and has his sights set on the others.

But, on August 19, we will get our first undisputed king in over a decade. Terence Crawford, the WBC and WBO super-lightweight champion, will fight WBA and IBF boss Julius Indongo in Nebraska. The winner will hold all the belts. For how long he’ll keep those titles remains to be seen – sanctioning bodies have a knack for calling mandatories at the same time – but to have a four-belt champion will be pleasing to many fans.

Better still, we’re set to get another. The World Boxing Super Series recently announced that three of the four reigning cruiserweight champions – Oleksandr Usyk (WBO), Murat Gassiev (IBF) and Mairis Briedis (WBC) – are in. Add to that WBA ‘regular’ champion Yunier Dorticos and things get even more exciting.

The winner of the tournament – which is scheduled to end in May 2018 – will hold three major titles and the WBA ‘regular’ title. The snag here is that Denis Lebedev still holds the WBA ‘super’ title, as he did not defend it when Gassiev defeated him last year. He fights Mark Flanagan later this month and is not slated to enter the World Boxing Super Series.

So, the tournament winner will not fully be an undisputed champion, but they will be very close. If the WBA stick to their commitment of having just one champion per weight class, the WBSS winner should be matched with whoever holds their cruiserweight ‘super’ title at the time. If that happens, then we’ll also have an undisputed cruiserweight world champion.

Of course, that requires the sanctioning bodies to work in unison throughout the tournament to ensure their belts are all still involved. There are plenty of things that could go wrong, but if all goes to plan we could start seeing more four-belt champions.