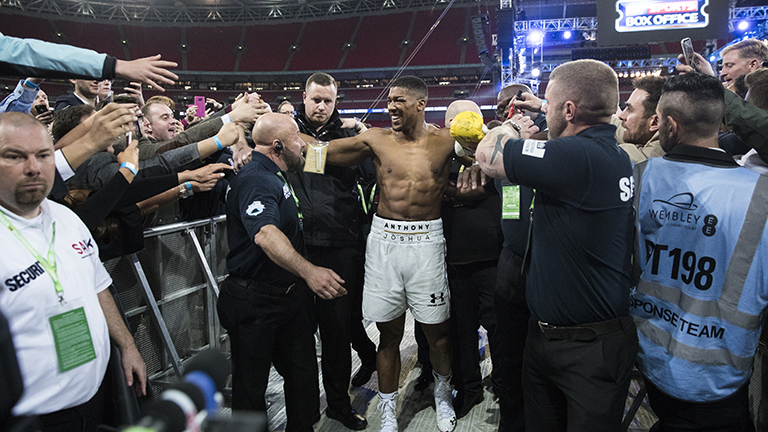 It sparked speculation as to how much he can earn in his career. Here, Press Association Sport compares Joshua to some of sport’s top earners, both at home and overseas.

Joshua was widely reported to have earned around £15million from the Klitschko fight alone, which is sure to lift him among the highest-earning UK sportsmen of the year.

According to Forbes’ most recent sporting rich list, which covers earnings for the 12 months to June 2016, the top five UK earners were Lewis Hamilton, Rory McIlroy, Gareth Bale, Wayne Rooney and Andy Murray – the latter earning around £20.75m between tennis prize money and endorsement deals.

Manchester United and England captain Rooney, who earned just over £18m from football and another £5.4m in endorsements for a total of just over £23.5m, may be a realistic comparison for Joshua, while an explosion in advertising and sponsorship deals could push him towards Real Madrid and Wales forward Bale and his total of £32.4m.

Golfer McIlroy, with nearly £38.5m mostly in endorsements, and Formula One driver Hamilton, £41.5m, will surely remain out of reach compared to Joshua’s short-term earning potential.

Hamilton was 11th in the worldwide list, with entry to the top 10 starting at basketball star Kobe Bryant’s £45.1m total and stretching to the world’s top two footballers – Real Madrid’s Cristiano Ronaldo, with nearly £79.5m, beating out Barcelona’s Lionel Messi on £73.5m.

The projection was based on two “super-fights” per year for five years, backed up by American television deals with the likes of Showtime – where one prospective opponent, Deontay Wilder, has an exclusive contract.

Consider, though, that Floyd “Money” Mayweather, a world champion at several weights in his unbeaten 49-fight career, is estimated by Forbes to have made just over £600m and you get an idea of how far Joshua has to go to match his sport’s top earners – and, simultaneously, how far they are from the billion-pound barrier.

Oscar De La Hoya, a 10-time world champion turned hugely successful promoter, is estimated to have earned around £405m while Mike Tyson’s £544m includes not only his boxing earnings but also appearances in WWE wrestling and the Hangover series of films.

Forbes lists only three sportsmen as having cracked £1bn – Michael Jordan, whose basketball earnings are supplemented by an ongoing deal with Nike on his brand of trainers, Tiger Woods, who also adds a Nike deal and long-running EA Sports link-up to his 14 major titles, and fellow golf great Arnold Palmer.

After that trio, golfer Jack Nicklaus is listed at £914m before a significant drop to seven-time F1 world champion Michael Schumacher, fifth in the career list at £794m.